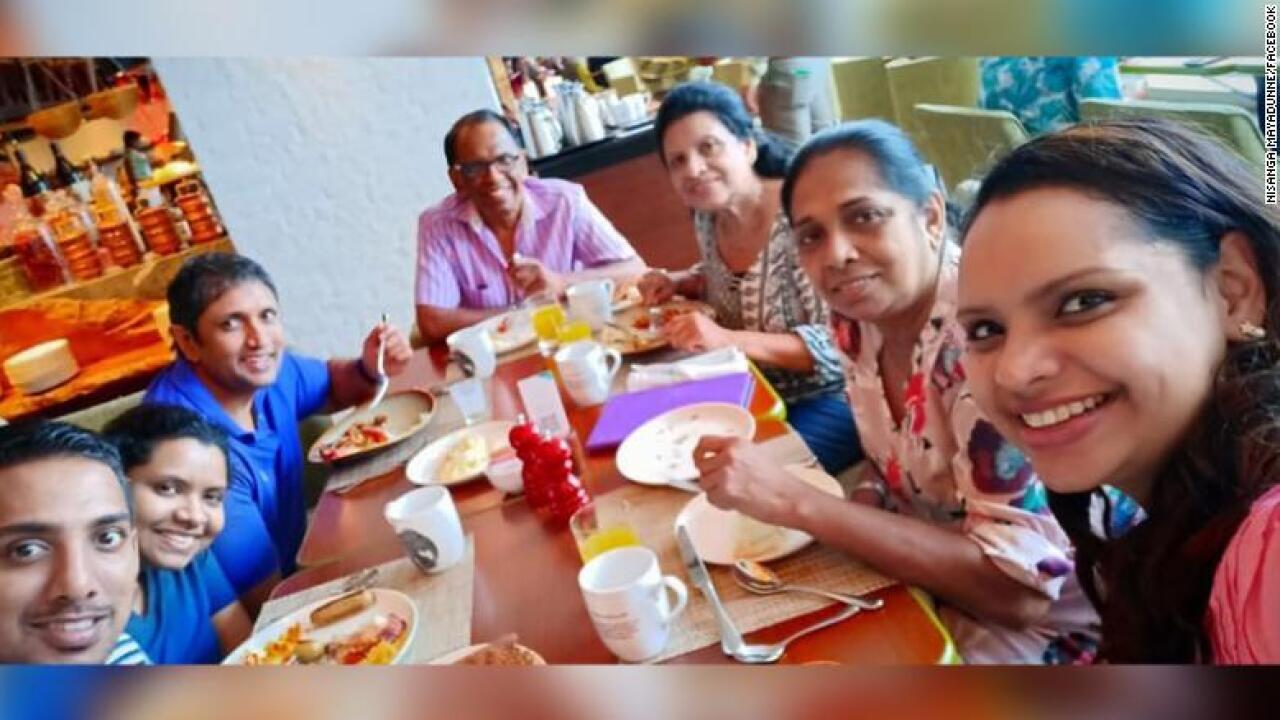 Television chef Shantha Mayadunne and her daughter Nisanga Mayadunne were killed in the explosion at the Shangri-La Hotel in Colombo, according to two family members.

Television chef Shantha Mayadunne and her daughter Nisanga Mayadunne were killed in the explosion at the Shangri-La Hotel in Colombo, according to two family members.

The bomb attacks in Sri Lanka that killed at least 290 people and wounded hundreds of others are a tragedy both locally and internationally.

The overwhelming majority of the dead and injured were Sri Lankans.

Some had also come from across the world, from as far away as the United States, China, and Turkey. At least 31 international tourists were killed in the attacks, according to a statement Monday evening from Sri Lanka’s Ministry of Foreign Affairs, which revised down the Sri Lankan tourism minister’s previous estimate of 39 people.

As information continues to emerge about the victims, here’s what we know about them so far:

Sri Lankan television chef Shantha Mayadunne and her daughter Nisanga Mayadunne were killed in the explosion at the Shangri-La Hotel, according to two immediate family members.

A Facebook photo apparently posted just before the explosion showed Nisanga and several others eating breakfast in the hotel. The photo caption read “Easter breakfast with family 😊”

United States Secretary of State Mike Pompeo said in a statement that several US citizens were among those killed.

Kieran Shafritz de Zoysa, a 5th grader from Sidwell Friends — a highly selective private school in Washington, DC — was identified as one of the victims.

The school emailed friends and families of attending students with the news that Kieran had died in the blasts.

“Passionate about learning, he adored his friends, and was incredibly excited about returning to Sidwell Friends in the coming school year,” school principal Mamadou Guèye wrote in the email.

Kieran was slated to return to Sidwell Friends for middle school next year.

Dieter Kowalski, from Colorado, was also identified as one of the American victims by Pearson, the education publishing company that he worked for. “Dieter had just arrived at his hotel, where many of our colleagues have stayed over the years, when he was killed in an explosion,” Pearson CEO John Fallon said in a statement.

Dieter’s brother Derrick Kowalski confirmed his brother’s death on Facebook, saying, “as we know that Dieter saw his friends as family, we would like to share our grief over this tragic incident.”

A spokesperson for Germany’s foreign ministry said that a German-American dual national had been killed.

Three children of ASOS tycoon Anders Holch Povlsen died in the attacks, a spokesperson for his clothing chain, Bestseller, confirmed to CNN Monday.

“We can confirm that Anders lost three children in the attack,” Jesper Stubkier, Bestseller’s communication manager, told CNN in a phone interview. He said he could not give further information about the victims because he “had to respect the privacy of the family.”

Povlsen is a member of the board of directors of Bestseller, according to the company’s website. Bestseller is the largest shareholder in clothing giant ASOS.

Earlier, Denmark’s Minister of Foreign Affairs, Anders Samuelsen, said on Twitter that three Danish nationals were killed in the bombings.

At least 8 British people are believed to have been killed in the attacks in Sri Lanka, according to Dean Haydon, a Senior National Coordinator for Counter Terrorism Policing at Metropolitan Police.

The UK Fire Service said on Twitter that retired Greater Manchester Fire and Rescue Service Borough Commander Billy Harrop and his wife, Sally, had been killed.

Ben Nicholson confirmed that his wife, Anita, 14-year-old son Alex, and 11-year-old daughter Annabel were killed Sunday in the bombing of the Shangri-La Hotel restaurant bombing in Colombo.

“Anita was a wonderful, perfect wife and a brilliant, loving and inspirational mother to our two wonderful children,” Nicholson said in a statement released by the UK Foreign Office. “Alex and Annabel were the most amazing, intelligent, talented and thoughtful children and Anita and I were immensely proud of them both and looking forward to seeing them develop into adulthood.

“They shared with their mother the priceless ability to light up any room they entered and bring joy to the lives of all they came into contact with.”

He asked for the media to respect his extended family’s privacy “and allow us to grieve together.”

A Portuguese Foreign Ministry spokesperson confirmed to CNN that one person from that country had died. On Monday, Portugese sustainable energy company T&T said in a Facebook post that their friend and collaborator Rui Lucas was one of the victims.

Two Turkish citizens were killed in the attack. Both were engineers, according to the state-run Anadolu Agency.

“We are in contact with their families and we will ensure quick return of the bodies to our country,” Cavusoglu said.

Two Australians from the same family

Two other Australians were injured and are in a stable condition, he said Monday.

Eight Indians died in the attacks, according to a statement from Sri Lanka’s Ministry of Foreign Affairs.

Yeola added that several more Indians were injured, but their names have not been released.

Chinese state media reported that two Chinese citizens, who were cousins, died in the attacks. Family members have identified them, the reports said.

One person from Bangladesh, one from France, one from Japan, one from the Netherlands, two Saudi Arabian nationals, and one from Spain were also killed in the attack, the Sri Lankan Ministry of Foreign Affairs said in its statement.

The nationality of one of the dead is still being determined, the statement said.

Fourteen foreign nationals remained unaccounted for, and could be among the unidentified victims at the Colombo Judicial Medical Officer’s mortuary, the Ministry of Foreign Affairs said.

Seventeen foreign nationals injured in the attacks are receiving treatment at the Colombo National Hospital and a private hospital in Colombo while others have been treated and discharged.

Tributes to the victims and condemnation of the attackers have poured in from across the world.

“I wish to show my affectionate closeness to the Christian community, hit while gathered in prayer, and to all the victims of such cruel violence,” said Pope Francis in his Easter Urbi et Orbi blessing. “I entrust to the Lord those who have tragically been lost and I pray for the wounded and all those who suffer because of this dramatic event.”

In Paris, the Eiffel Tower went dark at midnight Sunday to pay tribute to the victims.

“The attacks on tourists and Easter worshippers in Sri Lanka are an attack on humanity,” former US President Barack Obama tweeted. “On a day devoted to love, redemption, and renewal, we pray for the victims and stand with the people of Sri Lanka.”