15 tornadoes touched down in Virginia during outbreak on Good Friday 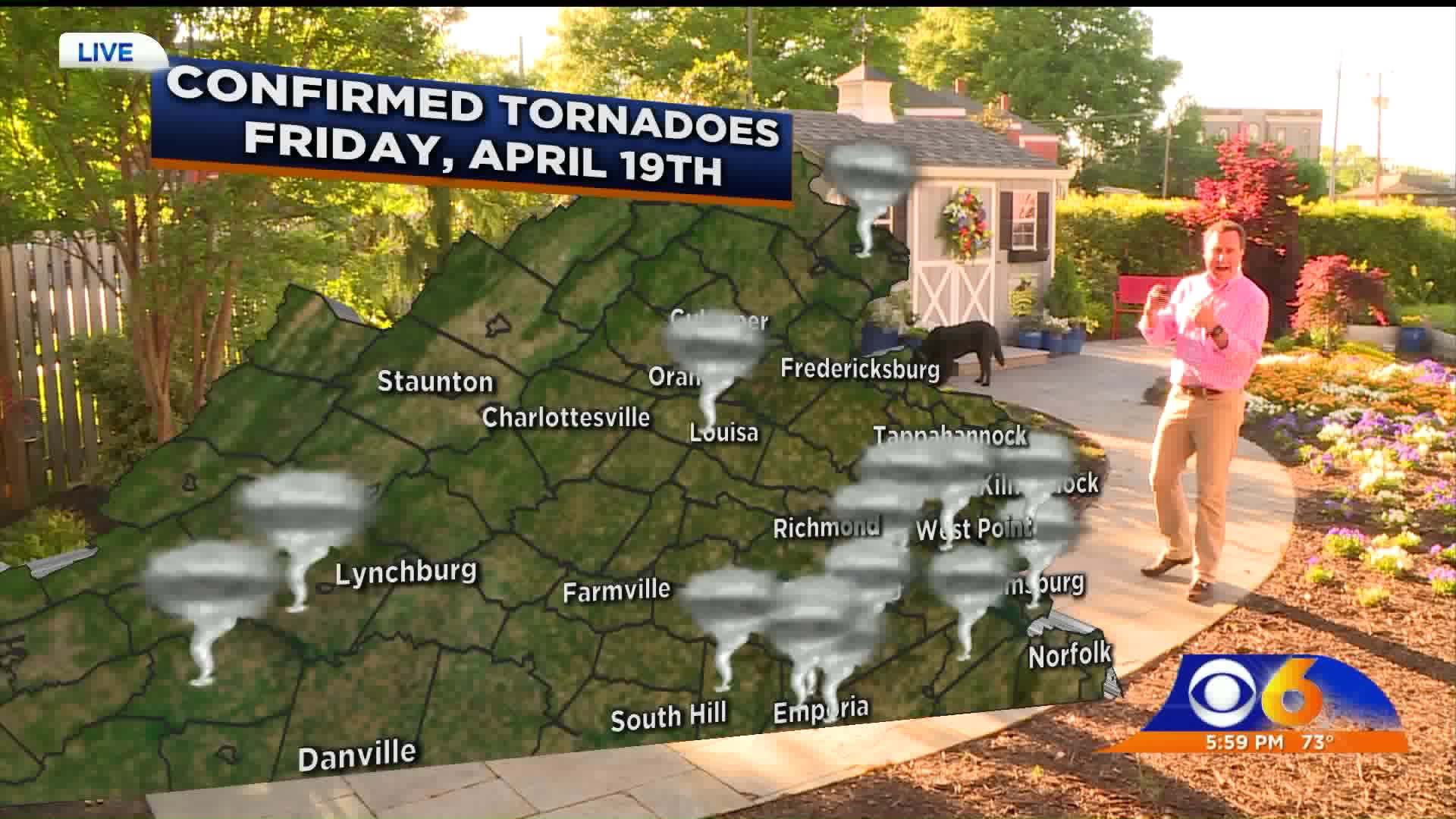 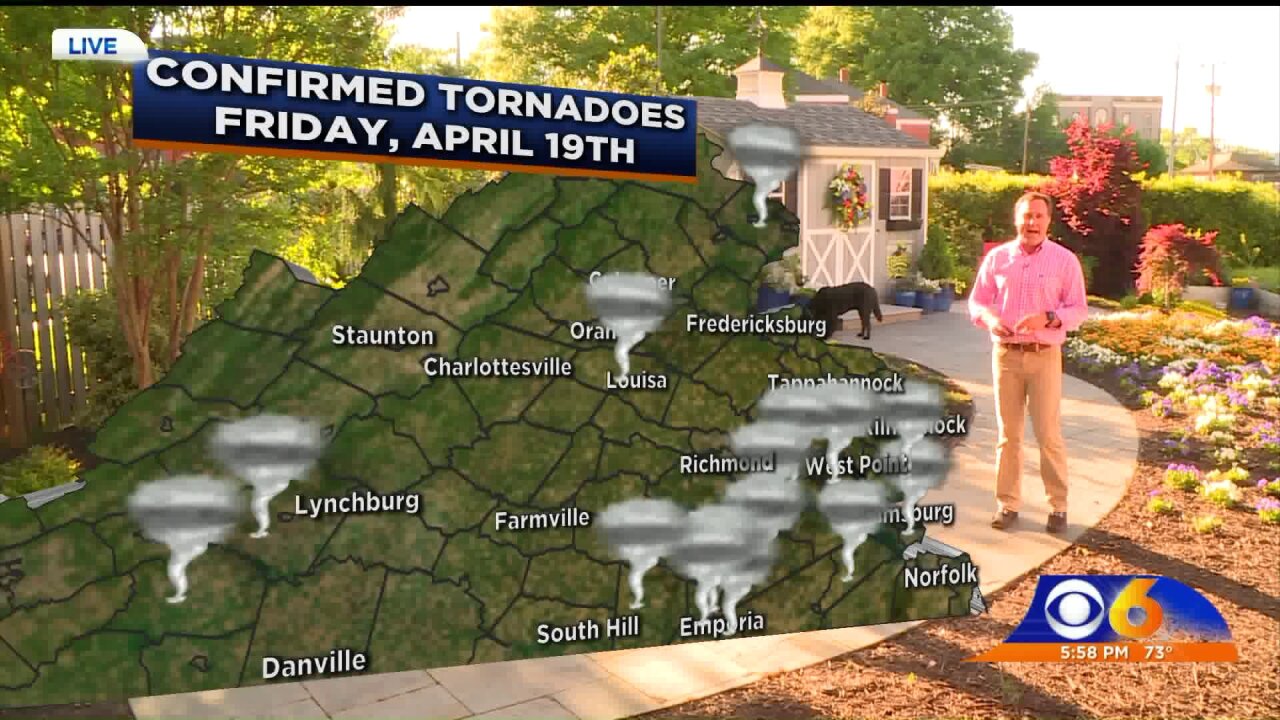 The 15 tornadoes rank as the 3rd most on any single day in Virginia recorded history and the second most for a non-tropical event.

Two people were injured, according to officials.

"The NWS Damage Survey has concluded that an EF1 tornado touched down about 2.5 miles north of Thaxton, VA in Bedford County, around 11:22 a.m. The initial touchdown was near Patterson Mill Road," NWS official said. "The tornado stayed on the ground for about 3 minutes or for about 1.8 miles, uprooting or snapping trees. The tornado destroyed an outbuilding off of Centennial Road, before dissipating."

"The tornado crossed the Roanoke River into Northampton County, NC near Garysburg and moved north-northeast across NC Highway 46 where it snapped and uprooted several trees," NWS officials wrote. "The tornado continued tracking across rural portions of Northampton County, NN before crossing into Greensville County, Va. near Skippers Road where additional trees were snapped. The tornado then briefly lifted while shifting its track slightly east and touching down again near Caney Swamp south of Taylor's Mill Road. From here, the tornado continued northeast and caused EF-1 damage to numerous trees along low ground road, before reaching Highway 58 in southwestern Southampton County, Va and then lifting again."

"The tornado touched down northeast of the town of Brodnax in Brunswick County," NWS officials said. "The tornado mostly uprooted and snapped trees along its path. A tree also fell on a horse and killed it."

No other injuries were reported.

"The tornado touched down near the intersection of Brink Road and Collins Road about 3 miles SW of Emporia," NWS officials said. "The tornado snapped trees and did damage to a couple of outbuildings along its path. Minor damage also occurred at a shopping center in Emporia. The tornado lifted just north of town."

"The tornado touched down just south of Sussex Drive about 4 miles east of Stony Creek, VA in Sussex County. It then traveled northeast and crossed Jerusalem Park Road near Courthouse Rd, before continuing northeast across General Mahone Highway and lifting before reaching Centerville Road in Prince George County," officials said. "The tornado mostly uprooted and snapped trees along its path. A garage was also destroyed from a tree falling on it."

"The tornado touched down just south of Lebanon Road then traveled north-northwest across Lebanon Road and Pole Run Road," NWS official said. "Many trees were snapped or uprooted and numerous sheds and outbuildings received significant damage or were destroyed. This area was where the EF-1 damage occurred. The tornado continued to track across Pole Run Road and Hines Road before lifting NW of Hines Road."

“The National Service in Wakefield confirms an EF2 tornado just northeast of Charles City on 4-19-19. The tornado touched down just east of The Glebe Lane about 1.7 miles northeast of Charles City causing some trees to be uprooted and snapped along Ruthville Road. Soon after crossing Ruthville Road, the tornado intensified to an EF2, causing extensive damage to Charles City Rod and Gun Club. The roof of the building was lifted off and blown partially off. In addition, the south facing exterior wall was blown in. The tornado continued tracking northeast, crossing Old Elam Cemetery Road and then The Glebe Lane, causing extensive tree damage including snapped and uprooted trees consistent with EF1 damage. The tornado then weakened to an EF0, before lifting just northeast of Sturgeon Point Road.”

"The tornado touched down near Mill Swamp Road and Wrens Mill Road, VA in northern Isle of Wight county. The tornado tracked northward crossing King`s Landing Lane before continuing into the James River," NWS official said.  "Numerous trees, including large oak trees, were snapped or uprooted along the tornado path. One tree was downed on a house."

Depend on the CBS 6 Weather Authority for the most complete weather coverage.

"The tornado touched down in a wooded area east of Mineral, VA in northeastern Louisa County near Elk Creek Road. The tornado crossed Elk Creek Road producing EF0 damage in the trees, and knocked a tree down on a car on Gill Lane," NWS officials wrote. "The tornado proceeded north into an open field, before producing substantial damage to a restored 18th century two-story home. EF2 damage was observed as the roof was removed and numerous hardwood trees on the property were snapped. More hardwood trees were snapped and uprooted immediately north of the property before crossing an arm of Lake Anna. The tornado then produced EF1 damage to the garage and trees at a residence along Beauregard Way, before lifting shortly thereafter."

“The tornado likely touched down as a waterspout over the Warwick River. The tornado tracked northeast through the Sanford, Carriage Hill, and Denbigh sections of Newport News. The tornado produced mainly tree damage, particularly near Sanford elementary, and did destroy a small storage shed. The tornado lifted before reaching US Route 60 near Denbigh Village center.”

“The tornado likely touched down as a waterspout over the York River. The tornado arrived on land and produced its most intense damage in the trees along Jenkins Neck Road. The tornado proceeded to the north-northeast and flattened a shed near the intersection of Maryus Road and Guinea Circle. The tornado likely lifted in the marshland north of Maryus.”

"First evidence of damage was near Fox Mill Road and Pinecrest Road where several trees were downed at approximately 855 PM EDT. Isolated tree damage from this point to near the U.S. Geological Survey complex on Sunrise Valley Drive was noted, with several trees topped along Glade Drive near Rosedown Drive. After passing across the Dulles Toll Road (Route 267), minor tree damage was noted between Sunset Hills Road and Baron Cameron Avenue. The tornado tracked across Reston Hospital Center, with no visible signs of damage, but damage was noted just north of the hospital on Town Center Drive near Town Center Parkway, where a tree was topped, fencing blown down, and shingles blown off several townhouses.

After crossing Baron Cameron Avenue, the tornado passed just east of Trader Joe's grocery store destroying an outdoor shed there. Nearby, a tall, two-foot diameter tree crashed through the upper floor of a townhouse on Quietree Drive in Reston, that led local officials to condemn the property. Several large trees were either uprooted or topped along Bennington Woods Road between Crosswind Drive and Reston Parkway. A large, 100-foot tall tree fell and smashed the front end of an unoccupied vehicle parked along Center Harbor Road, midway between Reston Parkway and North Village Road. Minor tree damage along a narrow path was noted in neighborhoods located between North Village Road and Reston Parkway between Center Harbor Road and Wiehle Avenue. No substantial storm damage was noted north of Wiehle Avenue, where it appears the tornado weakened at 9:00 p.m.

The survey team also surveyed more storm damage extending to the east of the tornado track primarily just east and paralleling Reston Avenue. This damage consisted of trees blown down or topped.  The team concluded that strong straight line winds produced damage here, with two large trees falling on Fort Lee Street, one of which fell on a house."

Did you see damage where you live? We would like to include your photos in a comprehensive interactive report on the Good Friday storms. Email your pics or videos here.