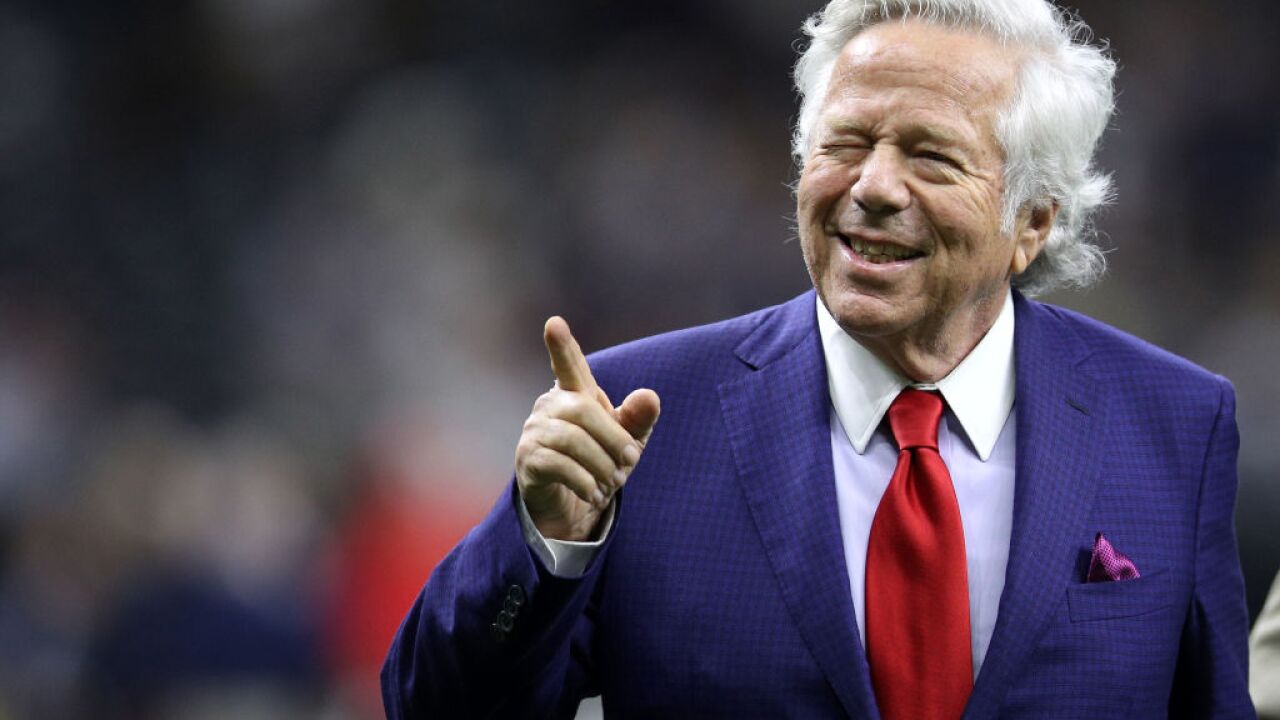 NEW ORLEANS, LA – SEPTEMBER 17: Owner of the New England Patriots Robert Kraft walks on the field prior to the game against the New Orleans Saints at the Mercedes-Benz Superdome on September 17, 2017 in New Orleans, Louisiana. (Photo by Chris Graythen/Getty Images)

Prosecutors will also release video showing 24 other men charged in the monthslong, multi-jurisdictional sting that allegedly ensnared Kraft in February, according to documents filed by the Palm Beach County State Attorney’s Office.

As custodian of the records, prosecutors say state law compels them to release the evidence to the media. They will “pixelate or blur depictions of obscene or pornographic images before releasing such records to the public, absent a court order.”

It was not clear when the video will be released.

On Friday, Judge Leonard Hanser did not rule on whether to release video from the sting but asked all parties to submit proposed orders in the case by Tuesday.

Hundreds of people were charged in the sting involving several massage parlors and day spas in Florida.

Kraft faces two misdemeanor counts of soliciting prostitution. He has pleaded not guilty and requested a jury trial.

Prosecutors offered to drop the charges in exchange for fines, community service and an admission that he would be found guilty if he went to trial, but a source familiar with the case told CNN that Kraft would not accept the deal.

“I am truly sorry,” he said in a statement last month. “I know I have hurt and disappointed my family, my close friends, my coworkers, our fans and many others who rightfully hold me to a higher standard.”

Separate from the issue of whether the media can obtain the video, Kraft’s attorneys have asked the judge to keep the video out of the trial. In court documents, his attorneys alleged that investigators provided false information in the affidavit to obtain a warrant for the sting, thus making the video inadmissible. A hearing on the matter is scheduled for April 26.

Kraft’s legal team has argued the video was “basically pornography” and is asking a judge to prevent the videos’ release to the news media, in part because the footage’s release would violate Kraft’s right to privacy.

Kraft’s attorney William Burck told the judge that it was vital to bar the media’s access to the video before the court rules on its admissibility in trial.

If the media is allowed to air the video now, but the court eventually rules the footage is inadmissible and the case still goes to trial, many potential jurors will have seen the video and will be tainted by evidence they weren’t supposed to consider, Burck argued.

The media coalition’s attorneys argued that the public has a right to obtain the video and that Kraft does not enjoy the right to privacy as a criminal defendant in a criminal case.

In the documents filed Wednesday, State Attorney Dave Aronberg said he cannot wait for a ruling on Kraft’s legal challenge.

“The legislative scheme of the Public Records Act does not allow a custodian to delay the production of records to allow the resolution of a constitutional challenge to the release of the documents,” he wrote.