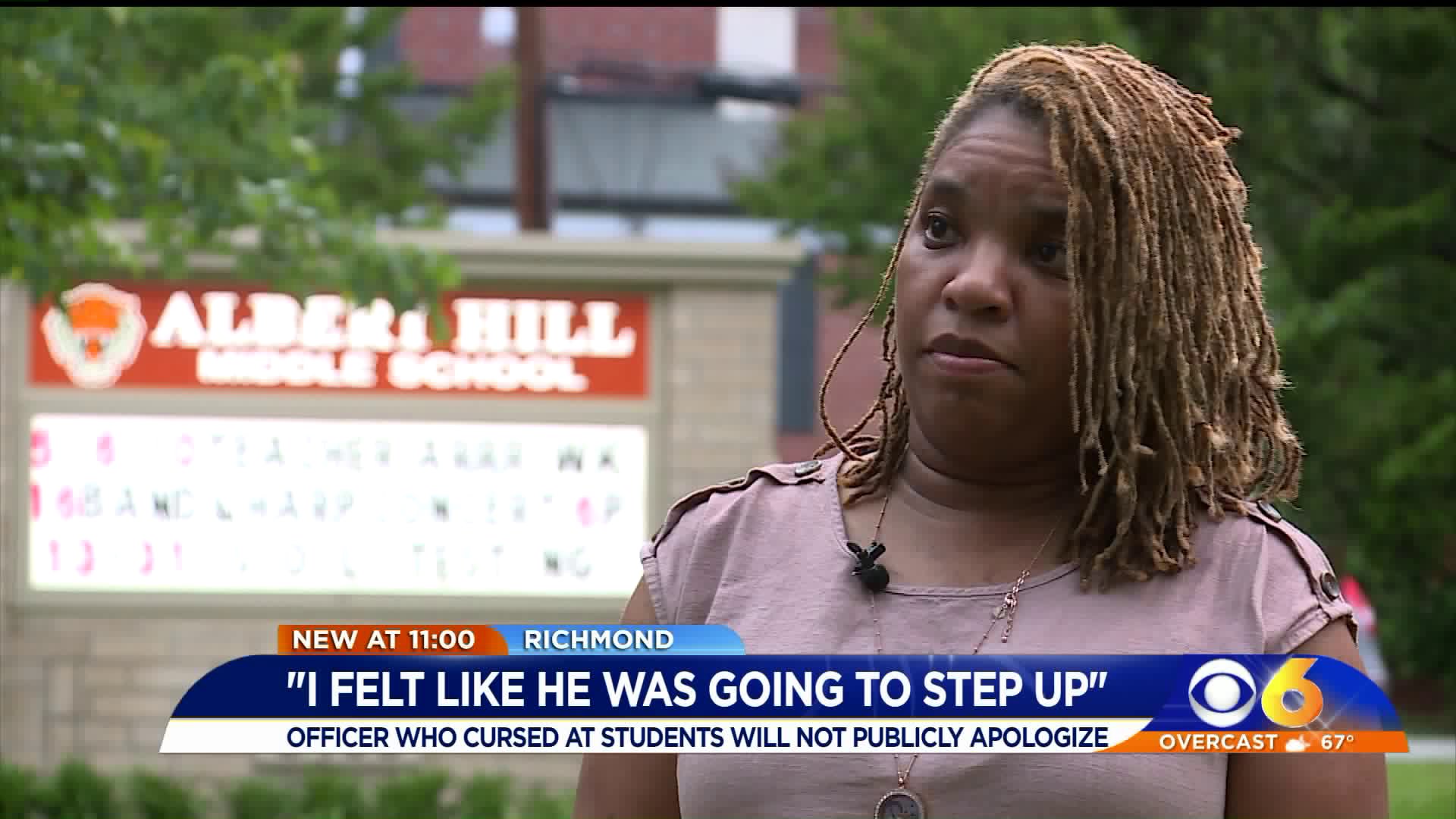 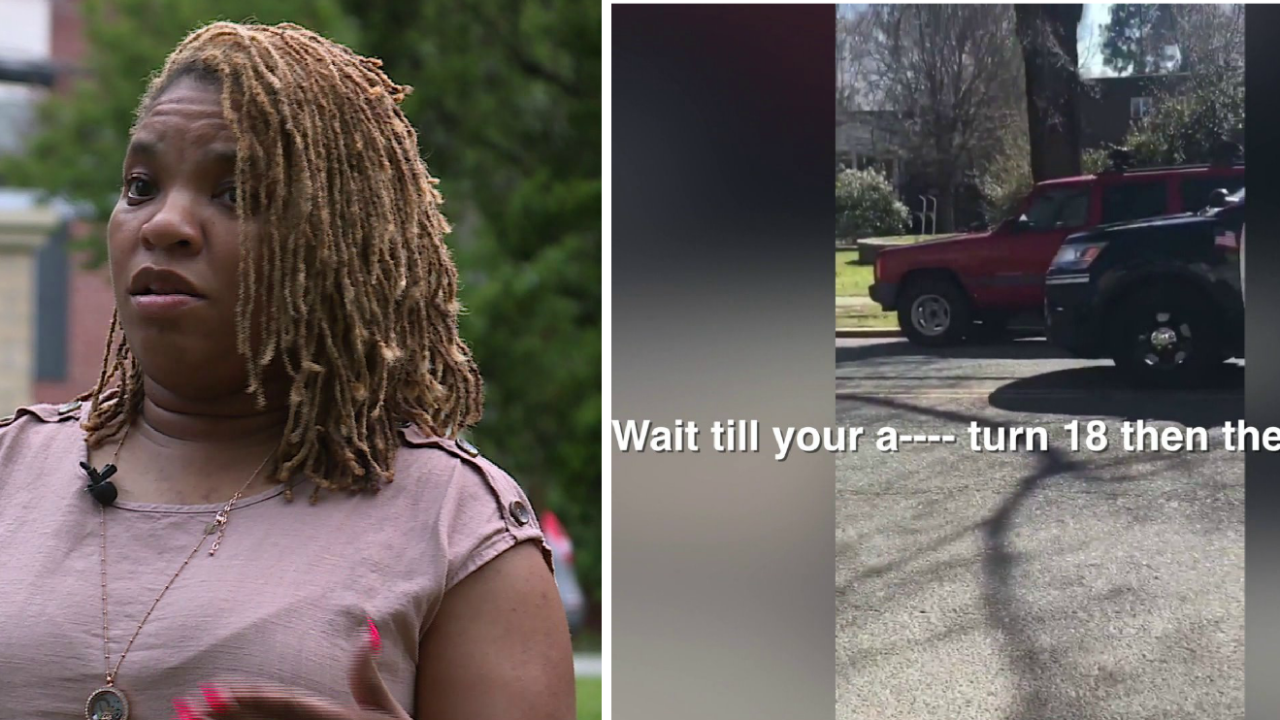 “This was opportunity for him as well to at least bridge that gap that’s tore up," said parent Keisha Curry.

“After meeting with the officer who made the ill-advised and inappropriate comments to several Albert Hill Middle School Students, I have informed the school that the officer will not be able to make good on his promise to participate in a school assembly this week,” said Interim Chief William C. Smith.

Last week, the officer met with and apologized to the students, their parents and several school officials who were directly affected by what he said

"At that meeting, the officer signed an agreement promising to attend the school assembly but, since then, he has reconsidered that promise and no longer feels he could handle the much larger setting of a school assembly. He wants me pass along his sincere apology for what he said that day and add another apology for not being able to meet with the entire school," Smith said.

“He did pull me to the side even later and I saw a different side to him, a good side and I really felt like he was going to step up and do this event," said parent Keisha Curry.

Prior to the apology, Smith said that the officer will be disciplined and must undergo mandatory remedial training.

“First, I apologize to the citizens of Richmond, to the families and to the children involved," Smith said during a news conference last month. "His actions do not reflect the values, training, or policies of the Department."

Smith said the department completed an internal investigation of the veteran officer after a 25-second clip, recorded March 28, showed a group of Albert Hill Middle School students involved in a verbal interaction with the officer.

The interim chief said the officer involved has served in various precincts across the city and does not have a "significant discipline history." In fact, Smith said the officer received one complaint during his 15-year tenure and missed court only one time.

"The officer was open and honest during his interview and expressed regret for his actions," Smith said. "He voluntarily requested to be given the opportunity to speak to and apologize to the parents. While these facts don’t minimize the incident, they do give you the totality of the person."

As a result of the incident, Smith said the officer will be disciplined and will attend "mandatory remedial training."

"Unrelated to his discipline, I have moved him from this area of the city to ensure that there is no possible perception of bias or retaliation within the community," Smith added.

The mother of one of the students said the officer initially drove past the students, who were standing outside waiting for an after-school program to begin.

The officer, she said, stopped and questioned the group about something he apparently heard them say.

That's where the video picks up.

"Even if we did say that, that's our choice of words," a female student is heard saying in the video.

"Just wait till your asses turn 18," a voice off camera replied "Then you're mine."

The officer is then seen driving off.

Tenesha Calloway, whose 14-year-old daughter was part of the group outside the school, said she was disgusted by what she saw in the video.

"These are children. If it's a teachable moment [for the officer], do that. Don't react emotionally," she previously said.

She said, in her view, it was an example of an authority figure speaking down to "black or brown children."

"What does he mean behind 'your ass is mine?'" she continued. "These children did not deserve to be spoken to in that manner."

Calloway said she hasn't been contacted directly by the officer nor RPD since the video was released.

"I contacted the lieutenant [Thursday] morning and they told me a letter will be sent to me in the mail in reference to the situation," she stated. "On the news this evening in front of everyone they’re saying he’s going to be reprimanded -- without apologizing to the children he said it to."

Calloway agreed to meet with the officer explaining,  "I want to know what he meant by the comment."

Richmond Mayor Levar Stoney released a statement after the video surfaced stating that behavior displayed would not be tolerated by any city employee.

"I trust that the Richmond Police Department will conduct a quick and thorough investigation and respond accordingly," the mayor said. "This behavior is unacceptable. It reinforces stereotypes of our communities that are hurtful and damages the relationship between our police department and the citizens they are charged to serve."