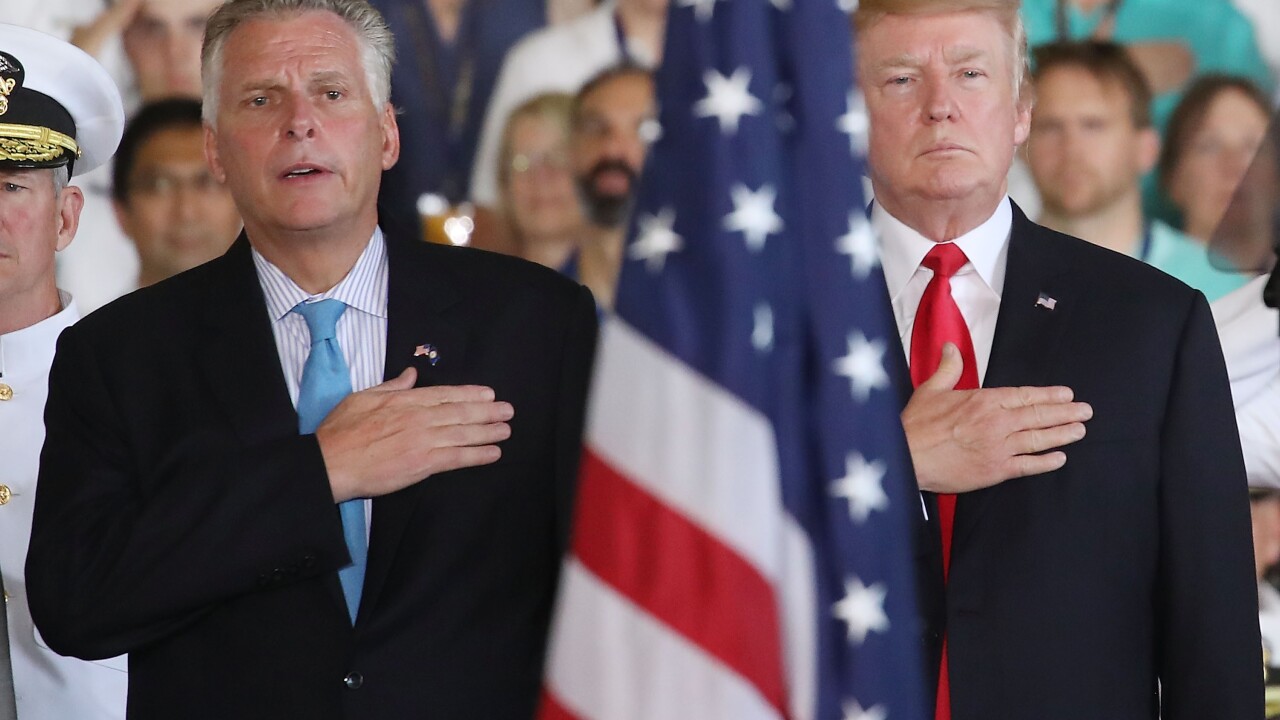 NORFOLK, VA – JULY 22: U.S. President Donald Trump (R), stands with Virginia Governor Terry McAuliffe during a commissioning ceremony on board the USS Gerald R. Ford CVN 78, on July 22, 2017 in Norfolk, Virginia. The keel of the USS Ford was laid in 2009 and is projected to be deployed in the year 2020, powered by two Nuclear reactors and is 1,092 feet long with a 134 foot beam and can carry over 75 aircraft. (Photo by Mark Wilson/Getty Images)

NORFOLK, VA – JULY 22: U.S. President Donald Trump (R), stands with Virginia Governor Terry McAuliffe during a commissioning ceremony on board the USS Gerald R. Ford CVN 78, on July 22, 2017 in Norfolk, Virginia. The keel of the USS Ford was laid in 2009 and is projected to be deployed in the year 2020, powered by two Nuclear reactors and is 1,092 feet long with a 134 foot beam and can carry over 75 aircraft. (Photo by Mark Wilson/Getty Images)

McAuliffe has been telling Democratic allies that he is leaning toward jumping into the Democratic presidential race next month, according to three people who have spoken to him. The former governor has long said he would make a decision by the end of March, with a potential announcement later in April.

McAuliffe’s possible entry into the 2020 race would make him the third current or former governor — joining former Colorado Gov. John Hickenlooper and Washington Gov. Jay Inslee — and the only Virginian in the crowded field of more than a dozen Democrats.

“I get the sense that he is moving closer,” said John Morgan, a longtime donor to Democratic causes and McAuliffe friend. “I think he is very close to it.”

Crystal Carson, McAuliffe’s spokesman, said that the governor is “seriously considering” a run, but that he has yet to make a decision.

While McAuliffe has spent the last week on a spring break vacation with his family, he has also been making calls to donors and longtime friends as he comes closer to making a final decision. One friend described him as “almost ready to jump in — he sees no reason not to.”

The Democratic field is already bursting with candidates, but there are more poised to make a decision in April.

Former Vice President Joe Biden is the biggest name, but his public flirtation with a candidacy has done little to keep other candidates out of the race. Other Democrats strongly considering a race include: Sen. Michael Bennet of Colorado, Gov. Steve Bullock of Montana and Reps. Seth Moulton of Massachusetts and Eric Swalwell of California.

Of all the potential Democratic candidates, few are more familiar than McAuliffe with the rigors of a presidential race. For nearly a quarter-century, he campaigned extensively in each race for Bill and Hillary Clinton and is a former chairman of the Democratic National Committee.

This lengthy history in Democratic politics has endeared the former governor to a number of top Democratic donors, making McAuliffe arguably one of the best Democratic fundraisers of his generation. This also means McAuliffe has a stable of Democratic donors ready to help fund a primary campaign, should he officially jump into the race.

One of those donors, Al Dwoskin said he recently talked to McAuliffe and got the sense that he is being told to run by people close to him.

“He has mixed emotions on it,” Dwoskin said. “I just think it is a little bit of a circus right now and jumping into a circus sometimes isn’t in your best interest.”

The challenges facing McAuliffe are long, particularly how the party has changed. Yet his record as governor of Virginia provides a lane that is not occupied by any other candidate. The question, of course, is whether a pro-business message can resonate among today’s Democratic primary voters.

McAuliffe believes that it can and has made clear to people he has talked to that he feels the best person to beat Trump is someone who can attack his business record.

Another hang-up for McAuliffe had been the looming candidacy of Biden. Although Biden is also looking at an April announcement, Morgan said it appears McAuliffe has moved past those concerns.

“It is still going to be on his mind, but I got the impression that he has moved past that objection and is now thinking who is our best chance in this environment to win and I think he believes, in his mind, it’s him, a pro-business Democrat,” he said.