Why the Mormon church changed its name 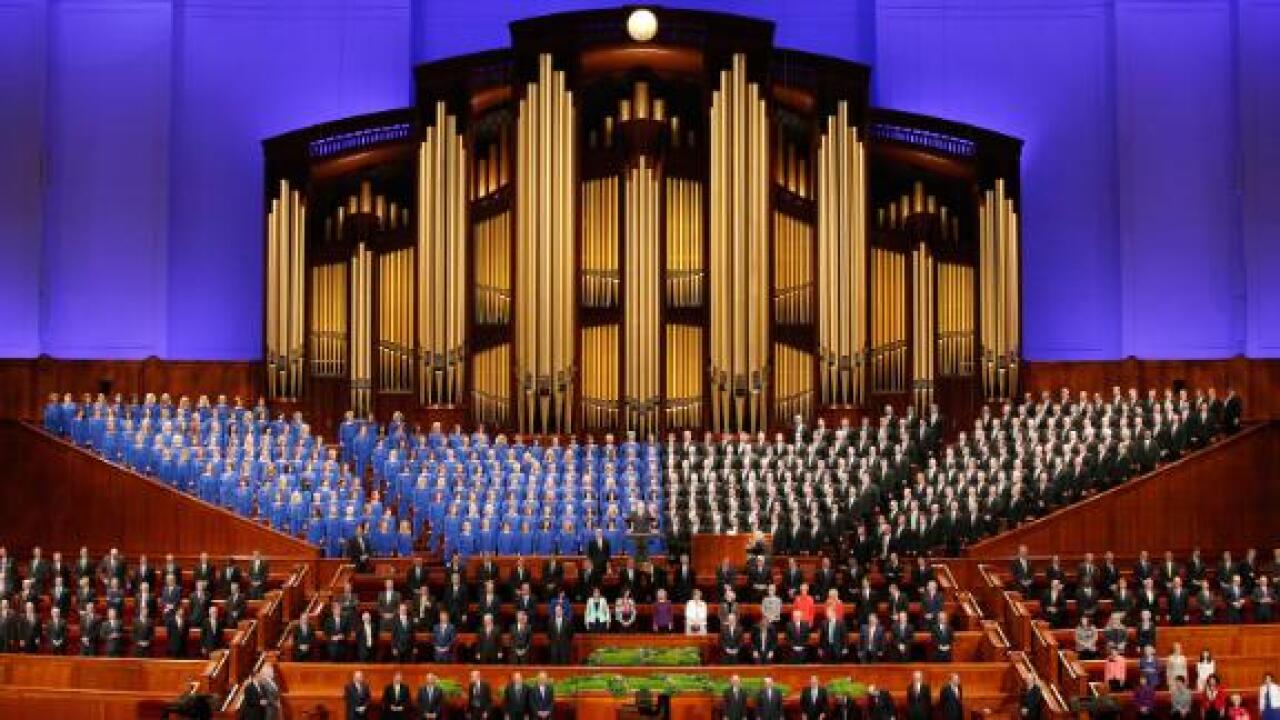 When the messages come during the dark of night, Russell M. Nelson reaches for his lighted pen and takes dictation from the Lord.

“OK dear, it’s happening,” the president of the Church of Jesus Christ of Latter-day Saints tells his wife, Wendy Nelson.

“I just remain quiet and soon he’s sitting up at the side of the bed, writing,” she said in a recent church video.

Sometimes the spirit prompts the prophet’s wife to leave the bed, though she’d rather sleep. One such morning, Wendy Nelson told Mormon leaders, her husband emerged from the bedroom waving a yellow notebook.

“Wendy, you won’t believe what’s been happening for two hours,” she recalled Russell Nelson saying. “The Lord has given me detailed instructions on a process I am to follow.”

Nelson’s nighttime messages have “increased exponentially,” his wife said, since last year when the 94-year-old took the helm of the Church of Jesus Christ of Latter-day Saints, widely known as the Mormon church.

“One of the things the Spirit has repeatedly impressed upon my mind since my new calling as President of the Church,” Nelson said, “is how willing the Lord is to reveal His mind and will.”

Through a spokesman, Nelson declined an interview about his revelations. But more than any Mormon president in recent memory, he speaks openly and often about his divine communications, some of which have significant consequences for the 16.6 million-member church. Last year, Nelson announced that God had told him the church should drop the moniker “Mormon,” a nickname that has stuck since the 1800s.

“The Lord impressed upon my mind the importance of the name He decreed for his church,” Nelson said, “the Church of Jesus Christ of Latter-day Saints.”

The church has changed its websites, social media accounts, email addresses, even the name of its famous “Mormon” Tabernacle Choir based on Nelson’s revelation. Church leaders have also lobbied the media to stop referring to Latter-day Saints as “Mormons.”

Many church members say they are energized and inspired by Nelson’s prophecies, and reassured that God directs their church through a chaotic and confusing time.

But others express discomfort with Nelson’s “because God told me so” use of authority and worry that it leaves little flexibility for younger Mormons struggling with deep questions about the religion.

“President Nelson is more willing and probably more required to assert his revelatory authority,” said Kathleen Flake, an expert on Mormonism at the University of Virginia. “Required because he is making so many changes and because the church has faced so much pushback.”

‘Moses in a business suit’

Lots of religions talk about revelations. They fill much of the New Testament’s last book and many parts of the older Hebrew Bible, from the burning bush that inspired Moses to the “still, small voice” who whispered to Elijah.

But many modern believers consider both Bibles to be closed canons, the last words we’ll hear from God before the final trumpet blows. It’s not that these religions consider prophesy passe. They just think the era of prophecy has passed. Even Pope Francis speaks of “discerning” God’s will, but rarely of revelations.

Latter-day Saints, as they prefer to be called, believe in continuing revelation. Their canon is open, ready to be revised or supplemented by its top cadre of leaders, first among whom is the church’s president, who is considered a “prophet, seer and revelator.” In some circles, Nelson is called, simply, “the Prophet.”

Matthew Bowman, a historian and author of the book, “The Mormon People,” said the view of the president as a “prophet” has risen since the 1970s, as the faith has grown and church leaders have become spiritual celebrities of sorts.

“It’s an attempt to emphasize the authority of the president of the church,” Bowman said.

But while few modern religions seem to blend pragmatism and prophecy quite so seamlessly, the Mormon church’s often mild-mannered and institutionally minded presidents rarely match the biblical image of prophets as wild-haired social critics who feed on locusts and honey.

“There’s no mistaking it, this is Moses in a business suit,” Flake said of the Mormon presidency, “someone who can lead people, write Scripture and talk to God.”

The importance of prophecy dates back to the faith’s founder, Joseph Smith, who said God told him to restore the Christian church. According to some Mormons, Christian churches’ lack of openness to new revelations is partly to blame for their apostasies.

Brigham Young, one of Smith’s successors, told Mormons that opening a channel of communication with God should be their “first and foremost duty.” They should seek divine counsel on even the “most trifling matters.”

In an early echo of Nelson’s yellow notebook, Young instructed Mormons that, to receive revelations, their soul should be “as pure and clean as a piece of blank paper that lies upon the desk.”

But prophecy can be a messy business, as Joseph Smith found out when other Mormons claimed to have divine sanction for their vision of the church. Smith ended the competition by claiming that God told him only the faith’s top prophets could speak for the whole church, a restriction that stands to this day. Mormons now believe that revelations are parceled out according to one’s role in the church and in wider society.

Huge decisions have been made based on Mormon presidents’ prophecies, according to church leaders, including ending the practice of polygamy and opening the priesthood to men of African descent.

In his first churchwide address as president, Nelson said revelations can guide Mormons through the chaos of modern life.

“We live in a world that is complex and increasingly contentious,” he said. “The constant availability of social media and a 24-hour news cycle bombard us with relentless messages. If we are to have any hope of sifting through the myriad of voices and philosophies of men that attack truth, we must learn to receive revelation.”

‘A major victory for Satan’

Raised in a non-religious home, Nelson read the Mormon scriptures at a young age and was convinced. So convinced that he went home and smashed his parents’ liquor supply.

Since then, divine omens have played an important role in his life, Nelson says. A former heart surgeon who conducted Utah’s first open-heart operation, the Mormon president said he has prayed for the Holy Ghost’s help while wielding a scalpel over a patient’s body.

Revelations have seeded Nelson’s love life as well. After his first wife died in 2005, Nelson proposed to the former Wendy Watson. “To strengthen my proposal to Wendy, I said to her, ‘I know about revelation and how to receive it,'” the Mormon president has said. Wendy Nelson said she, too, had received a revelation about their relationship.

During his time as a member of the Quorum of the Twelve Apostles, one of the church’s top echelons of leadership, Nelson said that he prayed for revelations daily. In 2016, before he became president, he defended the church’s then-new policy of calling LGBT couples “apostates” and effectively barring their children from baptism.

When liberal Mormons criticized the policy, Nelson called it “the will of the Lord” as expressed to former president Thomas Monson.

Some Mormons say Nelson was trying to shore up a man-made decision by calling it a revelation, but the criticism seems not to have slowed his revelation roll.

Not all of the changes were based on revelations, church leaders said. But, since they come from the top, they are all assumed to have the prophet’s stamp of approval, and therefore God’s as well.

Of Nelson’s reforms, none has received as much attention as the revelation about the church’s name. Church leaders say “Mormon,” which refers to a prophet who plays a pivotal role in the Book of Mormon, still holds a place of honor in the faith, but, as a reference to Latter-day Saints, it is an inaccuracy imposed by outsiders. (For that matter, the words “Shakers” and “Quakers” started as pejorative nicknames as well.)

Nelson has been forceful in his rejection of the “Mormon” nickname, saying it offends God and represents “a major victory for Satan.” He made a similar argument in 1990, when he was a church leader, but was apparently rebuffed by superiors.

Asked about the apparent contradiction — why would previous Mormon prophets reject what is now apparently God’s will? — church spokesman Eric Hawkins said the church has a saying: The most important prophet is the living one.

“God may have different intentions for the church at different times,” Hawkins said. “That’s baked into the notion that the church can change.”

Mormons on the margins

“People feel like this is very dynamic time in the church,” he said, “and when you have a president who speaks openly about being led by God, that is very exciting. You feel like you have a purpose and that things are going in a positive direction.”

But Evans also said that Nelson’s revelations raise certain tensions in the church. When a president calls his decision “God’s will,” that essentially ends any argument. Other Mormons’ revelations are often, if not always, expected to align with his priorities.

That top-down style can lead to polarization within the church, particularly among millennials who take a more DIY approach to spirituality, said Mica McGriggs, a psychologist and community activist in New York City.

“You see more and more young people saying, ‘You can’t just tell me the answers. I have to figure them out for myself,'” said McGriggs.

What’s more, it’s hard to be a prophet in the age of the iPhone, when any statement can be fact-checked in real time.

And while orthodox Mormons feel blessed to have a strong figure heading the church, McGriggs said, Mormons on the margins are more wary.

According to new research, many young Mormons live in a “gray area,” in which they may follow some tenets of the faith, but also adopt non-traditional practices like drinking caffeine and watching R-rated movies, as well as experimenting with their sexuality.

“There’s this middle ground where less orthodox members are living,” McGriggs said. “And it’s like the church is drawing a line in the sand, you’re either on the Lord’s side or you are not.”

In many ways, Mormonism is not so different from other American relgions, which are also grappling with crises of authority and struggling to connect with increasingly secular millennials.

Thus far, Nelson’s strategy seems to entail liberal use of his “trump card,” as Evans put it: his authority as the church’s chief prophet, seer and revelator.

In what you might call a prophetic speech, Nelson told Mormon millennials in 2016 that, in a society littered with “servants of Satan,” only God’s own prophets can be truly trusted.

“Prophets see ahead. They see the harrowing dangers the adversary has placed or will yet place in our path. Prophets also foresee the grand possibilities and privileges awaiting those who listen with the intent to obey.”

If there’s one thing we know, it’s that Nelson is listening and writing it all down on his yellow notebook.