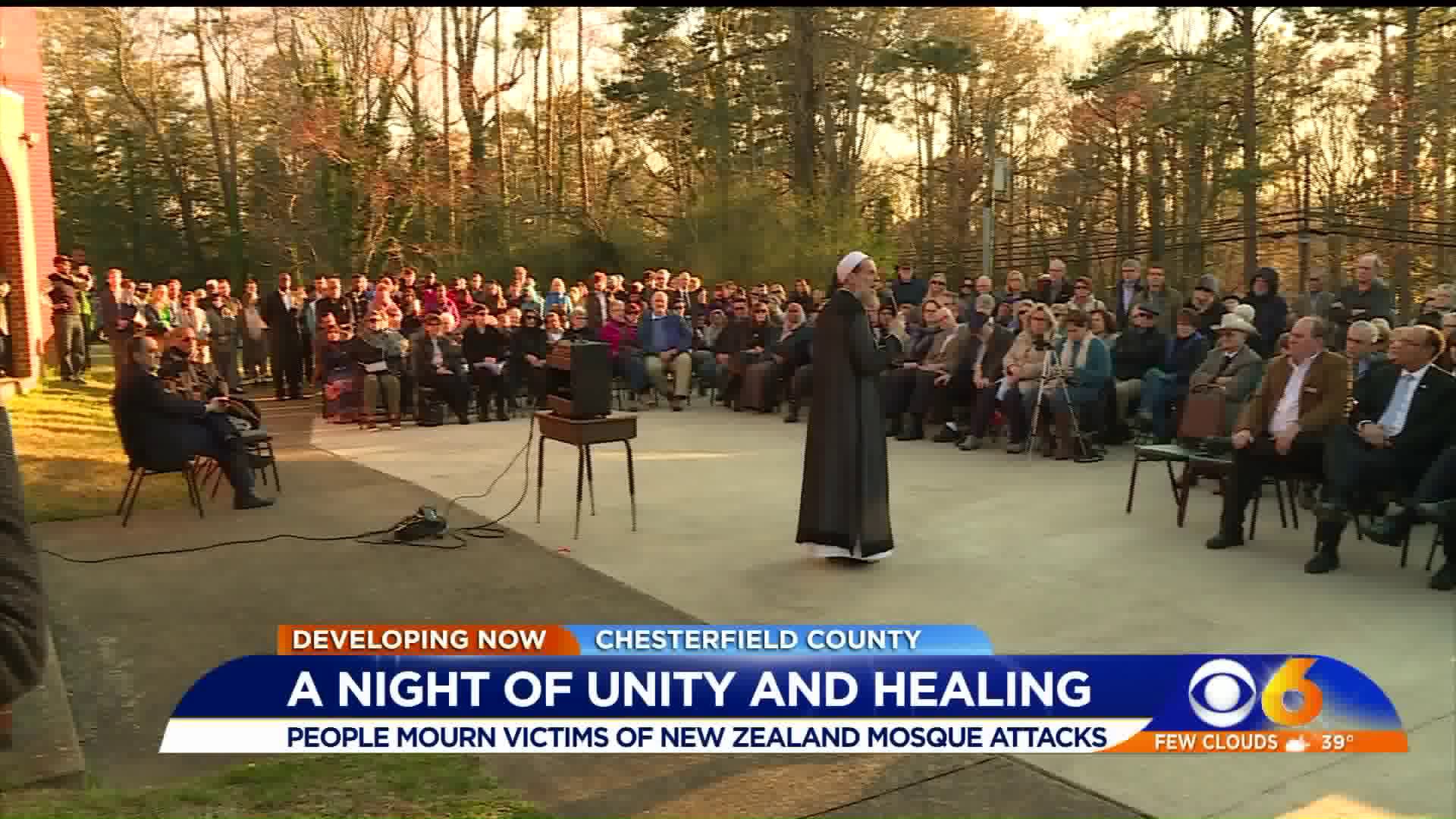 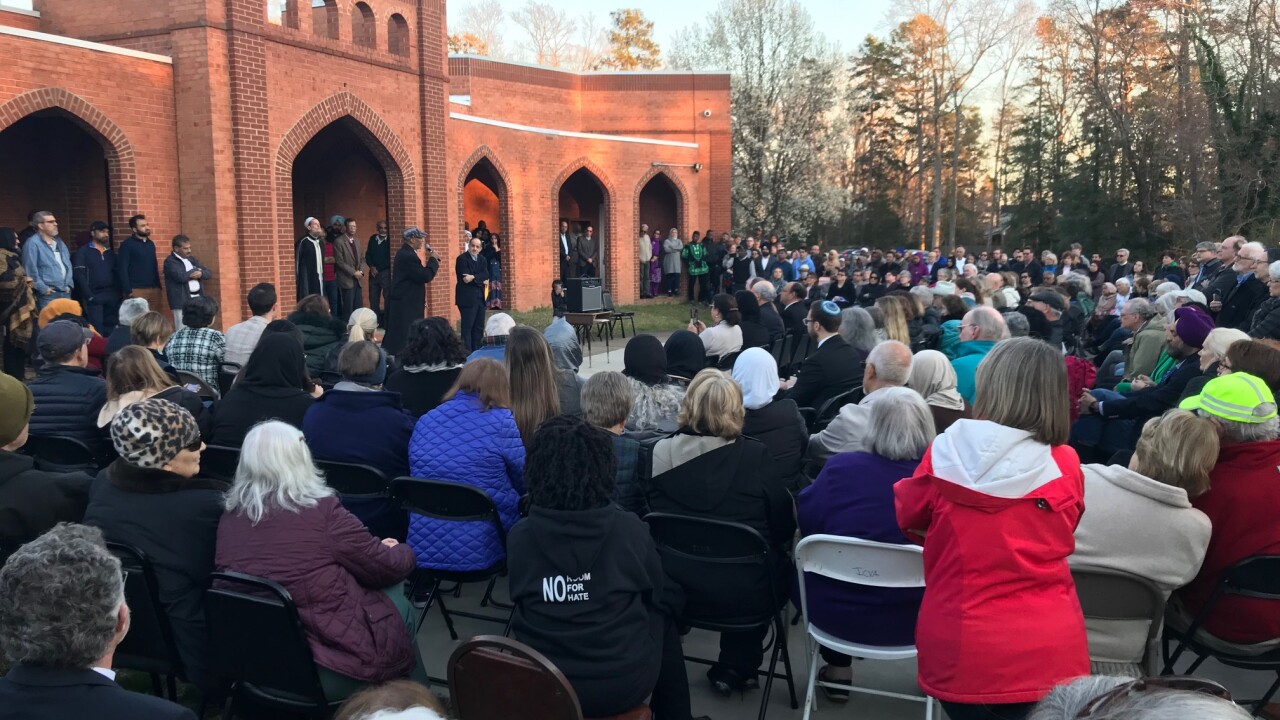 CHESTERFIELD COUNTY, Va. -- People from a variety of faiths gathered at the Islamic Center of Virginia Sunday afternoon to mourn the victims of the New Zealand mosque shootings.

Many religious leaders and other members of the community shared testimonials and prayers as speakers called on people to support the Islamic community while others condemned white supremacy.

"We need to be united in love and justice and against every form of hatred and bigotry,” Islamic Center of Virginia's Imam Ammar Amonette said.

There have been interfaith vigils around the world following the Friday massacre at two mosques in New Zealand that left 50 people dead.

New Zealand authorities are racing to identify the victims so their families can bury them in accordance with Muslim tradition.

In addition to the people killed in the attack on Friday, 50 others were wounded in the shootings, authorities said. Of the injured, 34 people remain in Christchurch Hospital, including 12 in intensive care.

Islamic tradition calls for a person to be buried as soon as possible after death, ideally within 24 hours.

Prime Minister Jacinda Ardern said Sunday that authorities had started returning identified bodies to families, and all bodies will be returned by Wednesday.

Six disaster victim identification experts have traveled from Australia to help hasten the process, she said.

New Zealand police described efforts to identify the victims as "detailed and complex work" that must be completed thoroughly.

"It's vital we have certainty around cause of death for any future court proceedings," Detective Superintendent Peter Read said.

Chief Coroner Deborah Marshall addressed the difficulties faced by authorities in correctly identifying the bodies of the victims of the terror attack.

"There could be nothing worse than giving the wrong body to the wrong family," Marshall said. "This is not going to happen here."

"We acknowledge that the last 48 hours have been the most horrific in these families' lives. We understand it is an added trauma for them that they have not been able to bury their loved ones quickly, according to their religious duty," Haumaha said.

"This is an unprecedented event and the support of the Muslim leaders and their community has been invaluable."

The victims' names were not made public but a preliminary list has been shared with families, New Zealand Police Commissioner Mike Bush said Sunday.

Two days after the shootings, Brenton Harris Tarrant, 28, appears to be the only person in custody who has been linked to the attack.

Three other people who were initially detained were not involved in the attack, Bush said, but authorities are not ruling out the possibility of other suspects.

"I will not be saying anything conclusive until we are absolutely convinced as to how many people were involved, but we hope to be able to give that advice over the next few days," the police commissioner said.

Ardern, accompanied by the governor-general, Dame Patsy Reddy, and Parliament Speaker Trevor Mallard, on Monday opened a national condolence book for victims. People can go to the National Library on Molesworth Street to sign the book.

"While it is a small action, the condolence book offers an opportunity for New Zealanders to unite and express our opposition to hate and state our commitment to the values of love and compassion," Ardern said.

British police arrest four over comments about the attack

Police in northern England have made a series of arrests on offenses relating to comments about the New Zealand attack.

Greater Manchester Police have three people in custody, according to a police statement.

A 33-year-old man and a 34-year-old woman were arrested early Sunday morning local time on suspicion of racially aggravated public order offenses. That followed reports they were abusing and threatening a taxi driver in the town of Rochdale, referencing the New Zealand attacks.

Police also arrested a 38-year-old woman over online comments about the violence.

A 24-year-old man was arrested and later released on bail over online comments on the mosque shootings.

Tarrant livestreamed the attack on Facebook and the graphic video was copied and shared by users of the platform.

Of the 1.5 million deleted videos, Facebook said over 1.2 million were blocked at the point of upload.

Additionally, all edited versions of the video that don't show the graphic content were also removed "out of respect for the people affected by this tragedy and the concerns of local authorities," tweeted Mia Garlick, of Facebook New Zealand.

Friday's video has reignited questions about how social media platforms handle offensive content, with many questioning if companies are doing enough to try to catch this type of hate-filled content.

Tarrant also sent an 87-page manifesto to Ardern minutes before the attack.

The document, also posted on social media before the shooting, was filled with anti-immigrant, anti-Muslim screeds. Authorities have declined to discuss potential motives for the attack.

Tarrant, who is facing one murder charge, made a hand gesture associated with white supremacists when he appeared in court on Saturday.

He was remanded in custody and will reappear in court April 5.

Some victims had found refuge in New Zealand

A Syrian refugee, a Pakistani academic and their sons were among the 50 people killed, family members and nonprofit organizations confirmed.

Syrian refugee Khaled Mustafa and his family moved to New Zealand in 2018 because they saw it as a safe haven, Syrian Solidarity New Zealand said on its Facebook page.

He was at the mosque with his two sons for Friday prayers when the shooter opened fire. His older son, Hamza Mustafa, 14, was killed and his younger son was wounded.

Victims hailed from around the world. Nine Pakistanis were killed in the attack. Six of them will be buried in New Zealand, Pakistani Foreign Minister Shah Mehmood Qureshi told reporters Sunday.

Three bodies will be brought back to Pakistan to be buried, he said, adding that he has asked New Zealand to hasten return of the bodies.

Makeshift memorials have sprung up around the mosques, with flowers and notes bearing messages of hope and love.

"They may take our innocence but we will show the world the meaning of love and compassion," said one note taped to flowers left on a road divider.

Survivors tried to warn others

Before two lightly armed community police officers ended the attack by running the gunman's car to the side of the road, some attempted to elude the suspect, according to survivors.

Survivor Ahmed Khan, after dodging a bullet fired by the shooter, ran to a mosque to warn others.

Inside he found a friend bleeding -- he had just been shot in his right arm. "I said to him, 'Calm down, the police is here now,'" Khan recalled. "And then the gunman came through the window and shot him -- when I was holding him -- in the head. And he was dead."

In video of the attack posted online by the shooter, he is greeted as he arrives at the first location, the Al Noor mosque, by a man who says "hello brother." Less than a second later, the attacker raises his semi-automatic shotgun and fires his first shots.

Suspect traveled to Turkey and Pakistan

Tarrant is an Australian citizen who had been living in the southern city of Dunedin, about 225 miles from Christchurch, Ardern said. He had traveled around the world and was in New Zealand sporadically, she added.

Officials said he had no criminal history in New Zealand or Australia and had not drawn the attention of the intelligence community for extremist views.

Tarrant visited Pakistan last October and a senior Turkish official told CNN that Tarrant traveled to Turkey a number of times and spent "an extended period of time" there. Turkey is "currently investigating the suspect's movements and contacts within the country," the official told CNN. The suspect may also have traveled to other countries in Europe, Asia and Africa, the official added.

"I can tell you one thing right now -- our gun laws will change," Ardern told reporters on Saturday. She said the Cabinet will meet Monday to have preliminary discussions on gun policy issues.

The Prime Minister confirmed that her office received an email with Tarrant's hateful, racist manifesto nine minutes before he shot worshipers at the Al Noor mosque. However, the email did not include a time, location or specific details of the attack, Ardern said, and it was given to security within two minutes of receipt.