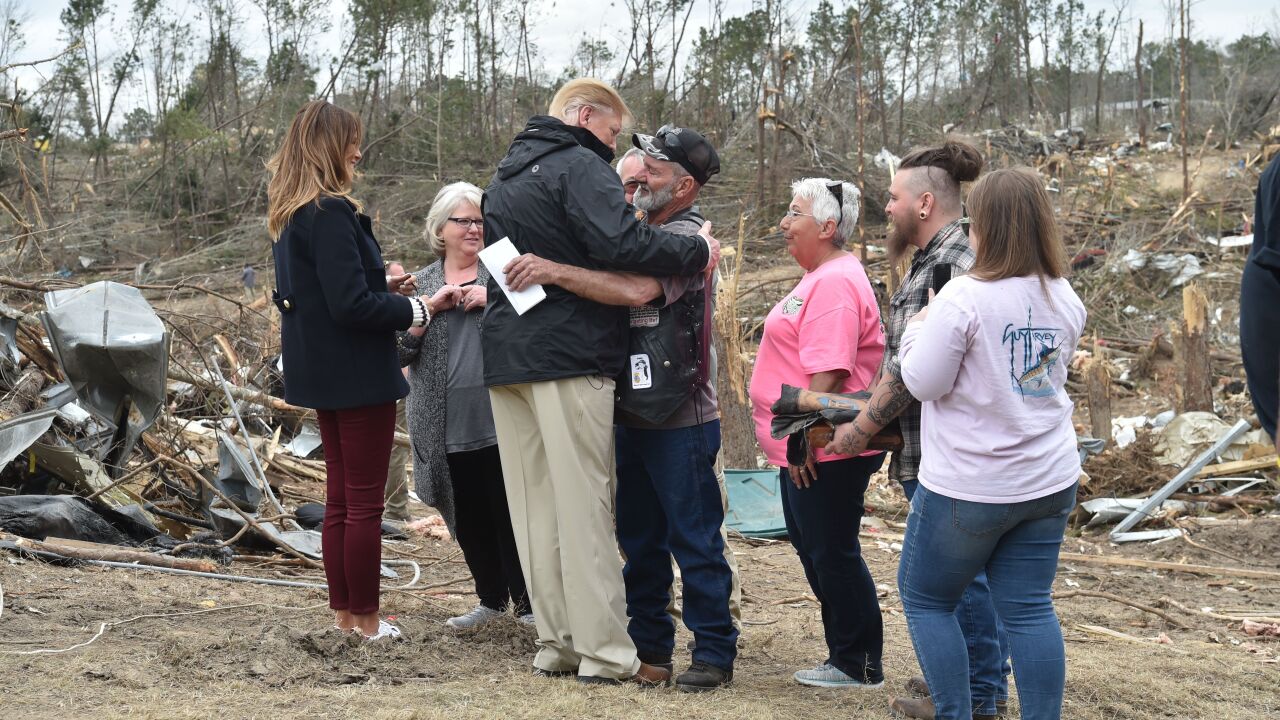 BEAUREGARD, Ala. — Alabamans digging through the rubble of last weekend’s tornado devastation welcomed a visit from President Trump on Friday and braced for the threat of more severe weather on Saturday.

But the danger is not as great as it was last week in eastern Alabama, said CNN meteorologist Monica Garrett.

“A tornado is possible,” Garrett said. “But the bulls-eye is more to the west.”

Twelve tornadoes struck the state and about 30 tornadoes hammered the Southeast that day, said Chris Darden of the National Weather Service office in Birmingham.

CNN meteorologist Dave Hennen said severe weather Friday afternoon into the evening will stretch from northern Texas into eastern Oklahoma and western Arkansas. The main threat will be damaging winds and an isolated tornado.

On Saturday, there is a threat for severe weather and tornadoes through Mississippi and parts of the Southeast. High winds, hail and tornadoes are possible.

The threat of severe weather on Sunday is not expected to be as widespread, Hennen said.

President Donald Trump visited Lee County Friday, which suffered the brunt of the storms last week. He called the disaster “a tragic situation” but said “a lot of work is getting done.”

“FEMA has been told directly by me to give the A Plus treatment to the Great State of Alabama and the wonderful people who have been so devastated by the Tornadoes,” he said in a tweet on Monday.

In Alabama, flags will fly at half staff until sundown Sunday in honor of the 23 people killed. They ranged in age from 6 to 89. Four of them were children, Lee County Coroner Bill Harris said.

Meanwhile, funerals will continue this week for the victims. The Poarch Band of Creek Indians tribe is making a $184,000 donation to the East Alabama Medical Center Foundation to assist in the burials of the 23 victims.

Its reservation is located in Escambia County, in the southwestern part of the state, about 57 miles northeast of Mobile.

“It is at times of greatest need that we often see our communities coming together to help one another, this is one of those times. Our thoughts and prayers are with all of those affected,” Stephanie A. Bryan, tribal chair and CEO, said in a statement on social media.

Harris said other local groups have also donated toward a funeral fund, and an unnamed, notable Alabaman is donating $10,000 for grave foot markers.

On Friday, a funeral will be held for the youngest tornado victim, Armando “A.J.” Hernandez, Jr., age 6.

“They were very humbled and very appreciative. I feel so bad for them. I told them, y’all don’t worry about that (the cost), I have it covered,” the coroner said.

The boy was found dead after sheltering in a closet with his older brother and his father during the tornado, according to CNN affiliate WIAT. His 10-year-old brother and father are both recovering at hospitals.

“He kept a smile on his face all the time … and he loved everybody,” his grandfather, Bobby Kidd, said about A.J.

Kidd was last able to hang out with his grandson during his first-grade musical a week ago, he said.

“I was lucky to be off work. I got to go see it. I thank God he gave me that opportunity. It was the last few moments I got to spend with him,” Kidd told the TV station.

When the tornado struck, A.J.’s father “grabbed the boys and was holding them,” Kidd said. “And he said he could feel his ears start popping. The house exploded and the force of the tornado snatched both of the kids away from him.”

Choking back tears, Kidd said, “We could’ve lost all three of them and we know there are families that lost their entire family.”

Erroll Reese told CNN affiliate WRAL that he lost seven members of his family to the tornadoes, and that at least 30 more now are without homes. In another family, Makitha Griffin lost five loved ones to the tornadoes.