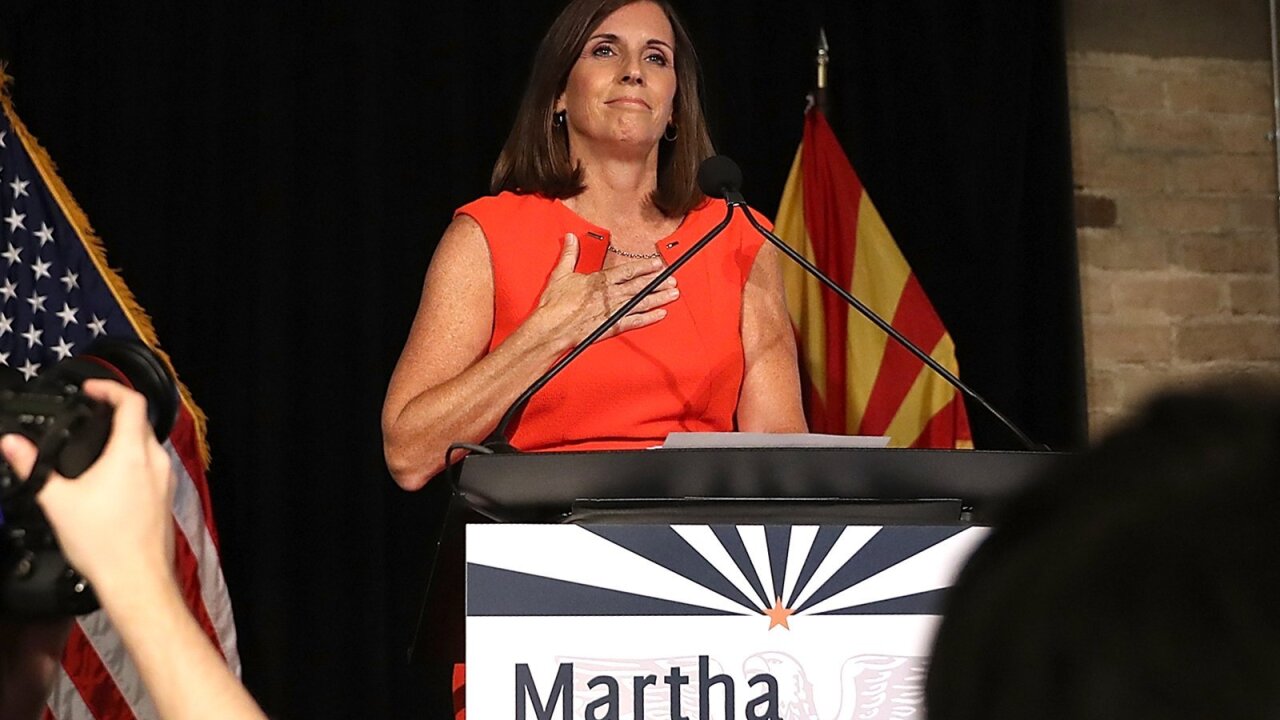 Freshman Sen. Martha McSally of Arizona revealed Wednesday that she was raped while she served in the military.

McSally, who is a Republican, made the revelation during a Senate Armed Services subcommittee hearing on sexual assault in the military.

McSally said to witnesses present, “So like you, I am also a military sexual assault survivor,” but she says she did not report and did not trust the system to do so. Welling up with emotion, McSally said she almost left the Air Force over her despair.

“Like many victims, I felt the system was raping me all over again. But I didn’t quit, I decided to stay,” she said after taking a pause to gather herself.

She called the issue of sexual assault in the military a “deeply personal” topic for her. She said at one point she “was preyed upon and raped by a superior officer.”

An aide to the senator told CNN that she has spent the past several days working on the testimony. McSally felt the need to come forward because she wanted to speak honestly with witnesses.

McSally rose to the rank of colonel in the US Air Force before retiring. She was the first American woman to fly in combat after a ban on women was lifted.

At the end of her prepared remarks, McSally envisions fixing the issue of sexual assault from within the ranks through a change in culture and lead by military commanders. The senator advocated strongly that commanders “must not be removed from the decision making responsibility of preventing, detecting, and prosecuting military sexual assault.”

McSally reiterated that sentiment in an exchange with one of the committee witnesses. “I don’t want commanders to be off the hook: I need them to be more responsible for solving this issue,” McSally said.

The top Democratic member on the committee, Sen. Kristen Gillibrand of New York, thanked McSally for sharing her story, saying that she was “deeply affected by that testimony.”

An Air Force spokesperson said, “The criminal actions reported today by Senator McSally violate every part of what it means to be an Airman.”

“We are appalled and deeply sorry for what Senator McSally experienced and we stand behind her and all victims of sexual assault,” Capt. Carrie J Volpe said in the statement. “We are steadfast in our commitment to eliminate this reprehensible behavior and breach of trust in our ranks.”

While McSally is one of only a few women in Congress to publicly discuss their #metoo story, Wednesday’s revelation comes less than two months after another Republican senator shared her own experience with sexual assault, though under vastly different circumstances.

In January, Sen. Joni Ernst, the highest ranking woman in Republican Senate leadership and an Army combat veteran, said she was “forced out as a survivor” of mental and physical abuse by her former husband and that she was raped by a boyfriend in college, following the public reporting of her divorce papers.

Ernst spoke publicly for the first time about her experiences while in her home state of Iowa, following several media reports based on statements from her divorce filing, which she said required her to address the issues before she was ready.

“I didn’t want to share it with anybody, and in the era of #metoo survivors, I always believed that every person is different and they will confront their demons when they’re ready,” Ernst said in an interview with Bloomberg at the time. “And I was not ready.”

Senate Majority Leader Mitch McConnell referenced Ernst’s experience as well when asked during a news conference Wednesday to react to McSally’s comments. The Kentucky Republican said that “whatever policy prescriptions Sen. McSally or Sen. Ernst may come up with, we’d certainly be open to.”

After speaking specifically about sexual harassment reforms in Congress, McConnell added “This is obviously a big problem and if we can find a further way to address it we should.”

Sen. Tammy Duckworth, an Illinois Democrat and combat veteran herself, said she was “in awe of the bravery shown today by the survivors who are testifying before the Senate and from my colleague, Senator McSally.”

“I agree that the military has utterly failed at handling sexual assault through the Uniform Code of Military Justice process and I will push for meaningful reforms,” Duckworth said. “As a former commander of an assault helicopter company, I want to know what else can be done beyond successful prosecutions that bring perpetrators to justice to make the lives of survivors better and ensure they have what they need to heal and be able to resume the careers they dreamt about from the time they entered the military.”

This story has been updated with additional developments Wednesday.