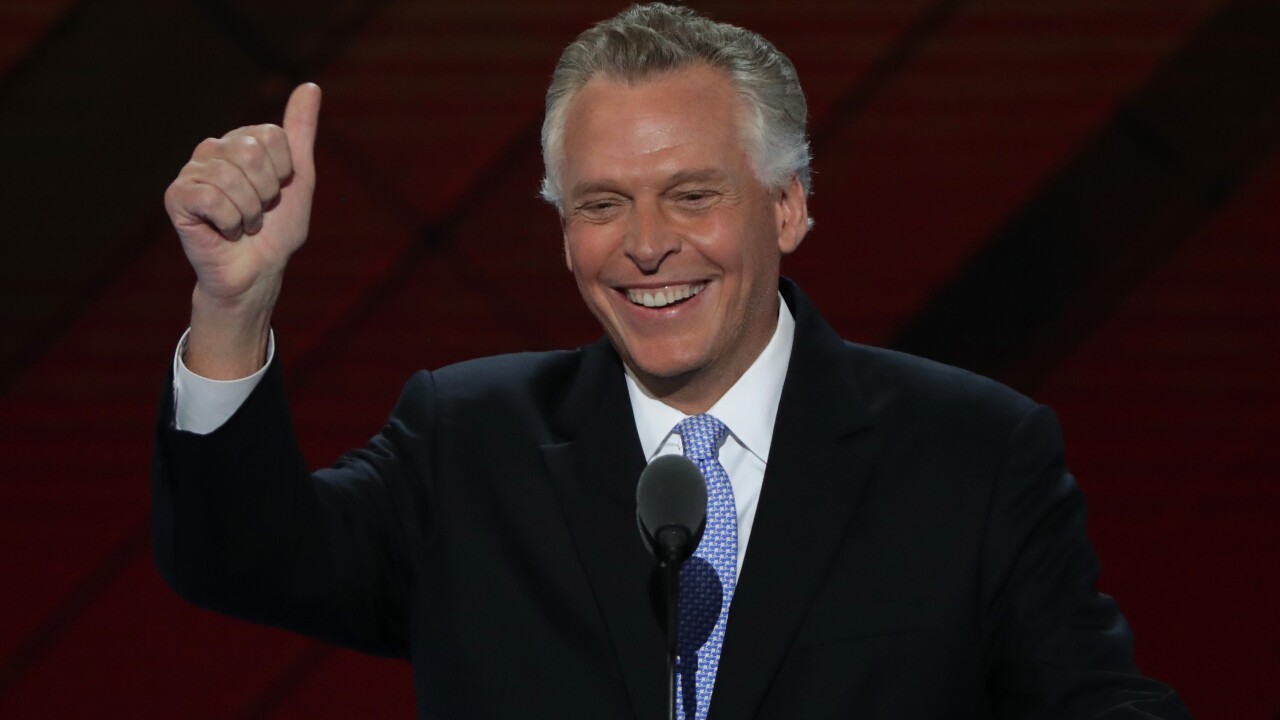 A number of top donors to the Democratic Party have told 2020 candidates and campaigns that they are waiting for former Virginia Gov. Terry McAuliffe to decide whether he will run for president before fully committing to other candidates.

McAuliffe has deep ties to the Democratic donor community after years of raising money for Bill and Hillary Clinton, the Democratic National Committee and his two campaigns for governor of Virginia. He has publicly said he will decide whether to run for president in the next month, but as he waits, a number of prolific Democratic donors are sitting on the sidelines.

The group includes Robert Johnson, the founder of Black Entertainment Television; longtime Democratic donor and former Ambassador to Portugal Elizabeth Frawley Bagley; and Chris Korge, a prolific donor to the Clintons and the co-chair of Miami Beach’s 2020 convention efforts.

“I did give a contribution to Kamala Harris, but when I gave it to her, I told her, ‘If McAuliffe jumps in, I am supporting him,'” Korge told CNN. “I have made it clear to her, as well as every other person who has approached me, including five or six of them running, that if McAuliffe runs, I am supporting him.”

Korge was echoed by John Morgan, the Florida-based attorney and donor who recently announced he was leaving the Democratic Party because he was disillusioned by the leftward shift of Democrats. Morgan has known McAuliffe since the early 1990s.

McAuliffe has long touted his expertise in raising money for Democratic causes and all of the donors CNN contacted said they had known the former Virginia governor for decades. But in the 2020 Democratic primary, connections to wealthy donors could be a negative for McAuliffe given how candidates like Massachusetts Sen. Elizabeth Warren and Vermont Sen. Bernie Sanders are swearing off big donors and posh fundraisers.

To some donors, that isn’t a bad thing for McAuliffe.

“I think for Terry, depending on what Joe Biden does, may have a real path to say, ‘I’m the capitalist in the room,'” said Morgan. “I think the best way to describe Terry is he is a compassionate capitalist.”

McAuliffe was the finance director of the Democratic Congressional Campaign Committee in his 20s and began raising money for presidential campaigns in 1980 with President Jimmy Carter’s re-election effort. When he raised money for Democratic presidential nominee Walter Mondale in 1984, an article about him noted he could “sell an icebox to an Eskimo or soda water to W. C. Fields.”

In 1988, McAuliffe was all in for Rep. Richard Gephardt and became one of his top fundraisers.

“You’ve only cost us the presidency,” McAuliffe once told a donor who didn’t want to give $5,000 to Gephardt. “I hope you sleep easy tonight.”

It was around the 1992 presidential campaign, however, that McAuliffe made his most lasting political connection when he began raising money and advising Bill and Hillary Clinton. By the end of Clinton’s two terms in the White House, McAuliffe boasted raising around $275 million for Clinton’s campaigns, his second inaugural, the legal defense fund that protected him from being ousted from office, his presidential library and the former first lady’s first Senate campaign.

That relationship would deepen in the subsequent years. McAuliffe was elected chair of the DNC in 2001 and served until 2005. He was the chair of Hillary Clinton’s 2008 presidential campaign and worked on the board of directors of the Clinton Foundation. And McAuliffe himself would successfully run for governor of Virginia, with the Clinton’s backing, in 2013 after a failed run in 2009.

This lengthy history in Democratic politics has endeared the former governor to a number of top Democratic donors, earning McAuliffe as arguably one of the best Democratic fundraisers of his generation.

“I am comfortable holding off and not making any significant commitment until he decides,” said Al Dwoskin, a top Democratic donor who started working with McAuliffe in the 1980s. “I would say it is highly likely he will run.”

One reason, said Dwoskin, is the fact that McAuliffe knows he will have the resources to get his message out.

“There is a big difference between having the resources to have a campaign and having an effective campaign. It is hard to have one without the resources,” Dwoskin said of McAuliffe. “That’s a big part of it.”

Elizabeth Frawley Bagley, a longtime Clinton donor, also told CNN she was holding off donating to candidates who have asked for support.

“I support what they are doing, some of them called me before they were running and asked what I thought,” said Bagley. “But at this point, I am holding off and waiting Terry.”

McAuliffe has told Bagely and others that he will decide on running by the end of March, something he has also told a handful of reporters.

One question that these donors have, though, is what the former Virginia governor will do if former Vice President Joe Biden, a candidate that many believe could make a McAuliffe run less successful, decides to run for office.

A source close to McAuliffe tells CNN that Biden, more than other possible contenders, directly impacts the former Virginia governor’s decision to run, but adds that McAuliffe would still consider running if Biden is in.

“It is a factor in his thought process,” the source said. “They would likely be speaking to the same voters and Biden would impact his chances.”

The source added: “It would certainly not rule it out, but it is a factor in his thinking.”

McAuliffe has expressed the same to donors, said the Democrats CNN spoke to.

“I think if Biden doesn’t run,” said Korge, “he should run.”

“I really think that if Joe Biden does not run… Terry runs as fast as he can to Des Moines, Iowa,” said Morgan. “And Des Moines, Iowa will see the greatest retail politician they have ever seen since Bill Clinton.”