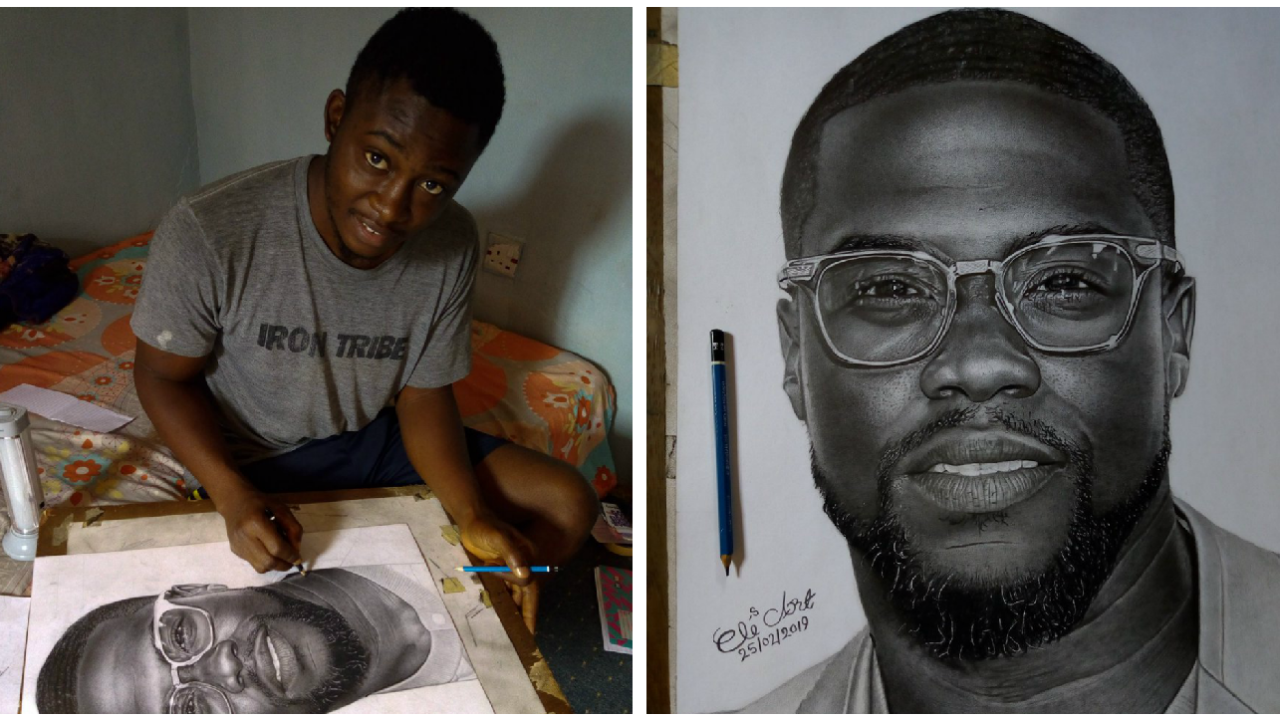 At best it was a long shot, but a shot worth taking nonetheless. So, Eli Waduba, a Nigeria-based pencil artist put out the message on Twitter and waited in hope rather than expectation.

Then two days of waiting and thousands of retweets later, Waduba got exactly what he asked for: his target audience of one, Kevin Hart, acknowledged Waduba’s drawing of the American comedian.

The drawing bore a remarkable likeness to the picture of Hart placed side by side, prompting Hart, 39, to say he’d buy the portraits and commission Waduba for three more.

“I see it and I want to purchase it…I also want to support you and your amazing talent by giving you a fee to do a pencil drawing of 3 of my celebrity friends that I can gift it to. DM your info and let’s get to work,” Hart wrote on Twitter.

I see it and I want to purchase it…I also want to support you and your amazing talent by giving you a fee to do a pencil drawing of 3 of my celebrity friends that I can gift it to. DM your info and let’s get to work! https://t.co/ImOYa0UNlL

For Waduba, it was the culmination of a journey that began many years ago and vindication for all the hard work he has put into his craft.

“But I did not know it would happen so fast.”

“It has been so overwhelming and words cannot describe it. Kevin Hart has always been my favorite comedian.”

“We have started the process [of selling the portraits],” he said.

Waduba, a native of Kaduna in Nigeria’s northwest, is part of a growing collection of creatives using pencil, charcoal, and oil to produce hyper-realistic art.

In 2016 the hyper-realist community in Lagos, Nigeria’s bustling economic capital drew worldwide attention. Oil paintings by the artist Olumide Oresegun were widely shared on social media as many took them to be actual photos.

Nigerian art curator Akinyemi Adetunji said at the time the trend has been made possible mostly because of the power of social media.

“The Nigerian art circle used to be closed up. It was just made up of a few people who were avid collectors,” Adetunji told CNN.

“But because of the influence of social media, it has opened up the industry to external influences, to many eyes.”

A Cooperative Economics and Management graduate of the Kaduna State Polytechnic, Waduba says he has been drawing since he was nine and now works full-time as an artist.

“I loved drawing growing up but I knew I could be better when I saw the works of people like people Arinze Stanley, Kelvin Okafor and Ken Nwadiogbu,” Waduba said.

Although Waduba wants to get even better at his work, for now, he’ll bask in the euphoria of being recognized by a global star in perhaps the most surreal way possible.