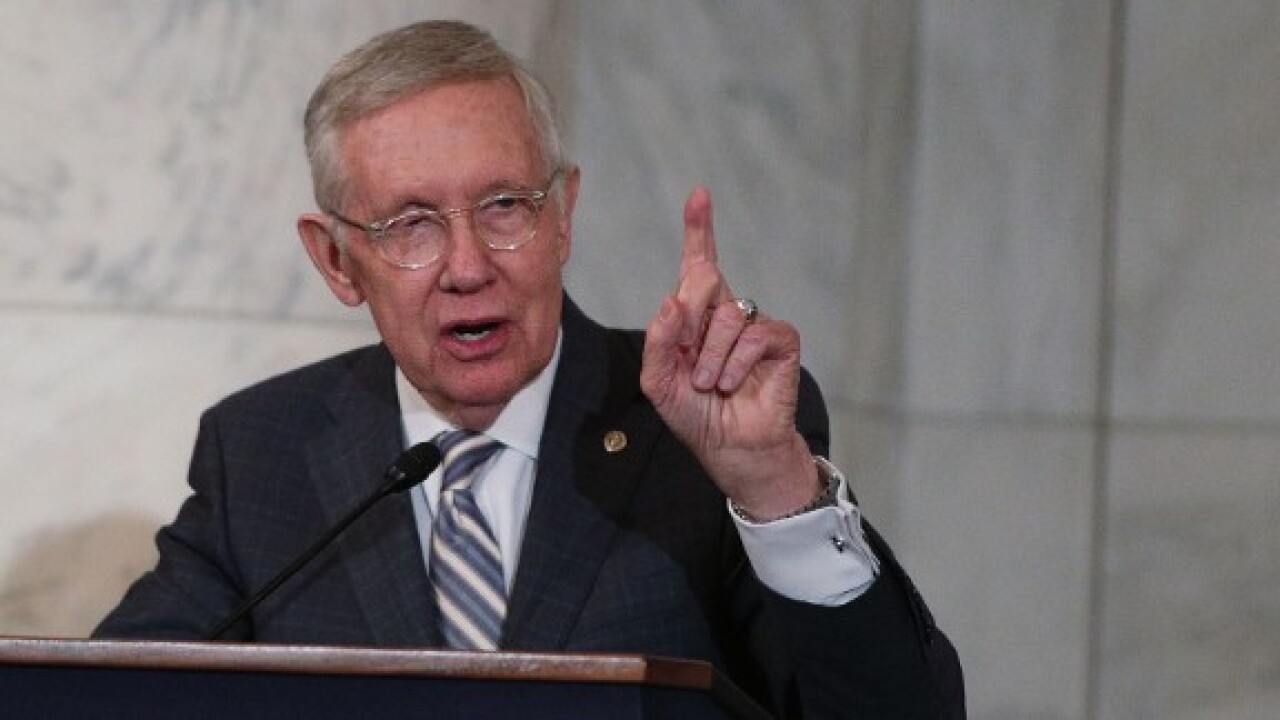 Former Senate Democratic Leader Harry Reid has news he is eager to spread: He is feeling “very good.”

The former US Senator from Nevada was diagnosed with pancreatic cancer last year, and New York Times Magazine writer Mark Leibovich wrote last month after an interview with Reid that he “does not have long to live.”

But make no mistake: this Harry Reid is still the same former boxer and political street fighter I covered for decades in the US Senate.

A searing critic of President George W. Bush and his administration, Reid now says in the age of Trump, he wishes for Bush again “every day,” saying Bush would be “Babe Ruth” compared to the current president.

In an apparent reaction to the interview Monday morning, Trump returned the spars, tweeting that Reid got “thrown out” (he retired) and was working to “put a good swing on his failed career.”

At 79, and after a cancer diagnosis, Reid is in an unusually reflective place. Late last week, Reid welcomed us to an office he keeps inside the Bellagio Hotel in the heart of the Las Vegas strip, where we spoke for over an hour about his health, his party, his legacy and of course, President Donald Trump.

Reid says he is now in remission, lucky that doctors caught his pancreatic cancer early and noting that it is almost always a death sentence because it is usually too late to treat when finally detected. But the chemotherapy treatment was especially brutal, compromising several vertebrae to the point where he needed two back surgeries and leaving him unable to walk much without assistance.

Since the 2016 presidential election, Reid has been colorful in criticizing Trump. He called the now-President everything from a “con man” to a “human leech” to a “big fat guy.” He is especially proud of using the word “amoral” in his New York Times Magazine interview because he says it resulted in a boost of googling the dictionary definition of the word.

I asked him if he has anything nice to say about the President. He pondered that question hard, took time to look for an answer and after a pregnant pause, finally replied, “I just have trouble accepting him as a person, so frankly I don’t see anything he’s doing right.”

First elected to the House in 1982 and then to the Senate in 1986, Reid became Senate Democratic leader in 2005 and served one of the longest tenures as floor leader in the chamber’s history.

He retired from the Senate just a few weeks before the Trump inauguration. When I asked if he was sad to miss the chance to go head to head with this president, he demurred.

“My time has come and gone as being a Senator. I of course watch the news, read papers very closely. I miss the battle, but I understand that, that’s not for me now,” he said.

During President George W. Bush’s administration, Reid was the Republican president’s chief antagonist in the Senate. He famously called the 43rd president a “loser,” and a “liar,” and even the worst president the country ever had.

Having covered all of that in real time, I almost fell off my chair when Reid told me that he now wishes for Bush again “every day.”

“He and I had our differences, but no one ever questioned his patriotism. Our battles were strictly political battles,” Reid said.

“There’s no question in my mind that George Bush would be Babe Ruth in this league that he’s in with Donald Trump in the league. Donald Trump wouldn’t make the team,” Reid added.

Reid dismissed calls for Trump’s impeachment as a “waste of time” because Republicans who have the majority in the Senate “are so afraid of Trump that they’re not going to get involved in this.”

But he doesn’t think Democrats need to worry about the backlash if they decide to move forward.

“I don’t think there would be a backlash,” he said. “Because the vast majority of the people know something’s wrong with Trump.”

That’s also the basis of advice for Democrats running for the White House in 2020.

“The candidates running need not talk about how bad President Trump is, they just need to talk about what’s good for the country. Everyone knows, even those people supporting knows what problems he has,” Reid said.

His wry sense of humor still very much intact, Reid proudly displays a framed letter on his office wall that Trump wrote him in 2010 congratulating the Nevada senator for winning his tough re-election bid that year.

Several months ago, Trump brought Reid back into the fold — tweeting about a speech Reid gave in 1993 criticizing birthright citizenship. Reid has long called that a mistake (one he says his Jewish born wife and daughter of immigrants lashed out at him for).

Still, he was unbothered by Trump using it as a political weapon.

“I guess everything’s fair, he found it, let him use it,” Reid said with a shoulder shrug.

Reid’s criticism isn’t reserved just for Trump. He also has harsh words for former FBI Director James Comey for not doing enough to combat Russian interference during the 2016 election. He said Comey did not respond to two letters that Reid, then the Senate Democratic leader, wrote to him asking for more information about intelligence reports that Russia was meddling in the election.

“I watch [Comey] in the halls of, I think it was in Russell Office Building being so self-righteous I almost wanted to shout, ‘Where were you when we needed you?'” Reid said.

The last time I was in Las Vegas with Reid was four years ago, after he announced that he would retire after three decades in Congress. During that interview, I asked about one of his more controversial political moves: going on the Senate floor during the 2012 presidential election and questioning whether then Republican presidential candidate Mitt Romney paid taxes.

Reid gave me a flip response — “He didn’t win did he?” — suggesting the 2012 outcome justified his controversial tactic against Romney.

Needless to say, there was very bad blood between Reid and Romney. Now, Reid revealed he made peace with Romney, reaching out through a mutual friend, former Utah Gov. Mike Leavitt.

“I don’t want the animosity between me and the senator,” Reid recalls saying to Leavitt about Romney, now Senator from Utah. “Set up a meeting for us.”

According to Reid, that’s exactly what happened. He said they “had a nice visit” and “shook hands and put stuff behind us.”

“I try to do that with everybody. My history is such that I kind of follow what Lincoln said: ‘The best way to make an enemy go away is to become their friend.'”

Reid also had a complicated relationship with the late John McCain. The two came to the House the same year, 1982, and then served in the Senate together for some 30 years as well.

They locked horns often along the way, but Reid said they talked several times as McCain was spending his final months in Arizona, conversations that now make him smile.

“I can remember our joking about it, and towards the end of his life I said, ‘John, do you remember the time I had given a speech on the floor?’ And I could see it coming. I knew he was mad. I could see him still walking towards me, and he said, ‘I’m going to knock the shit out of you,’ Reid recalled with a chuckle.

“We talked a few times before he passed away, and, frankly, shed a tear or two,” Reid added.

Never be a quitter. Never look back. That has always been Reid’s motto.

“I can remember college, you take a test and people gather around to talk about the test. I was never part of that gathering because there was not a damn thing I could do about what I’d written, so I didn’t do that. I took the test; that’s all I could do. Don’t look back,” said Reid.

But for a man who spent over 30 years as a fixture in Washington, there’s plenty to look back on. Unprompted, he offered his biggest regret: voting for the Iraq War.

“It’s the worst foreign policy decision in the history of our country,” Reid said.

“I made other mistakes, but that was a doozy,” he added, noting that he quickly realized his mistake and fought hard against it (opposition to the Iraq War in 2006 helped shepherd in a Democratic majority and made him Senate Majority Leader).

He talks openly about his proudest accomplishments. Top of his list are being the “quarterback” for making the Affordable Health Care Act a law, stabilizing the financial markets after the 2008 economic collapse, and preserving public lands in Nevada.

A little-known fact about Reid is that he was an advocate for women in his Senate office, especially women with children.

“Before it was the thing to do, I started bringing women to my office, and I instructed my chief of staff, ‘You tell them that if they have a child, if they want to have a child, that’s good for me. And if that baby is sick, let them stay home. If that babysitter’s not available, they can stay home.’ Everybody thinks, well that was very generous of me; it was very selfish because I knew that it would benefit me because that’s what it did. Those women became very [loyal] because I was the only senator that did that originally.”

Reid applauds the big increase in women elected to the Senate, saying he saw first-hand how different, for the better, the body changed.

“I think women have certain sensitivities that men don’t have. Things dealing with violence. I think the best advocates we have for gun control are women. The best advocates we have for non-engagement in foreign wars, foreign entanglements, are women. I think women are just so improved the Senate, and this isn’t something I read in a book. I watched it. I was there,” Reid said.

One of the dynamics that keeps Reid going is his love affair with his wife Landra. They will be married for 60 years this coming September. They’ve been in love since he was 15 years old and she was 14.

When Reid discusses her, his face lights up.

“She had a pair of Levi’s yesterday, and I said, ‘Man, she just looks so good,’ Reid recalled.

When he heard my amazement at this story, he exclaimed, “but it’s true!”

For the man who grew up in Searchlight, Nevada, in a shack with no running water, whose mother helped support her family by doing the laundry for prostitutes from the local brothels, Reid had this to offer on his legacy:

“I think that one of the things that I hope that people will look back at me and say is ‘If Harry Reid can make it, I can.’ Because I think I’m kind of an indication that you don’t have to come from parents who have a lot of money and a lot of education or a place in society that gives them some status because I was the wrong end of all that stuff.”