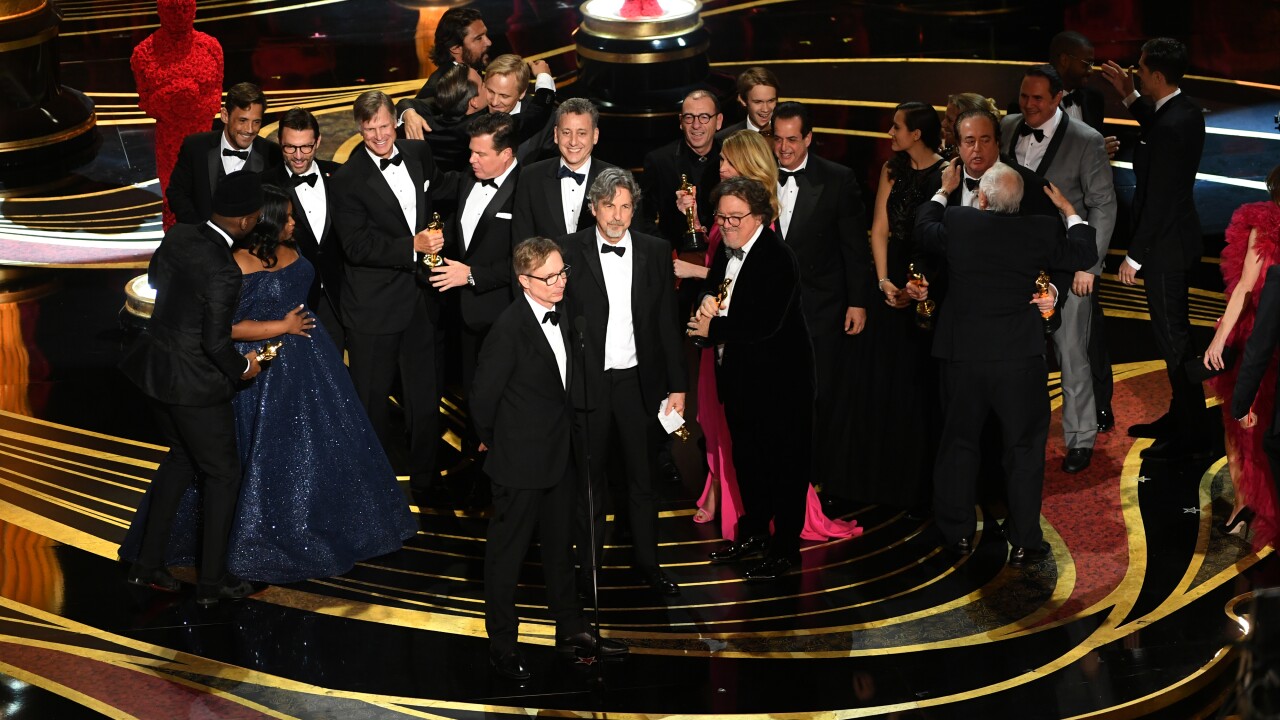 “Green Book” won best picture at the Oscars, marking the final twist on a night of historic firsts, filled with suspense until the final prize.

Despite controversies surrounding the film, and many outspoken critics, the period drama about race relations in the 1960s felt like a more conventional best-picture choice than its two top rivals, both of which had to overcome key hurdles: “Black Panther” represented the first superhero movie to earn such recognition, while “Roma” not only would have been the first foreign-language winner, but was likely hobbled by those who still see its distributor, Netflix, as an upstart in the movie world.

The Oscars compensated for a host-free ceremony with a night of breakthroughs, moving briskly through the categories in a concerted effort to shorten the run time, amid a night marked by greater inclusiveness and that spread the wealth among the nominees.

Award voters extended honors to a number of blockbusters, including “Black Panther,” which earned several technical awards; and “Bohemian Rhapsody,” the biography of Queen and the band’s frontman, Freddie Mercury, earned four Oscars — the most of any film — including Rami Malek’s first for the central role.

The eclectic nature of the winners — including several surprises — seemed indicative of what was already deemed one of the most wide-open races in years, given the lack of consensus among guild awards leading up to Sunday’s event.

Perhaps no surprise came bigger than best actress, as “The Favourite’s” Olivia Colman upset seven-time nominee Glenn Close, who had marched through awards season with enough victories to make her a presumptive favorite. (Colman, in an emotional speech, practically apologized to Close for winning.)

As for politics, a recurring theme involved the Trump administration’s immigration polices, including an early joke from Maya Rudolph that among the things that wouldn’t be happening during the telecast, “Mexico is not paying for the wall.” For his part, Malek referenced being a first-generation American, the son of Egyptian immigrants.

Still, the most overt and rousing rejoinder belonged to Spike Lee — a winner for adapted screenplay for his movie “BlacKkKlansman” — who pointed to the 2020 election, urging people to “be on the right side of history. Let’s do the right thing!” Congressman and civil-rights icon John Lewis also received a prolonged ovation, introducing “Green Book.” 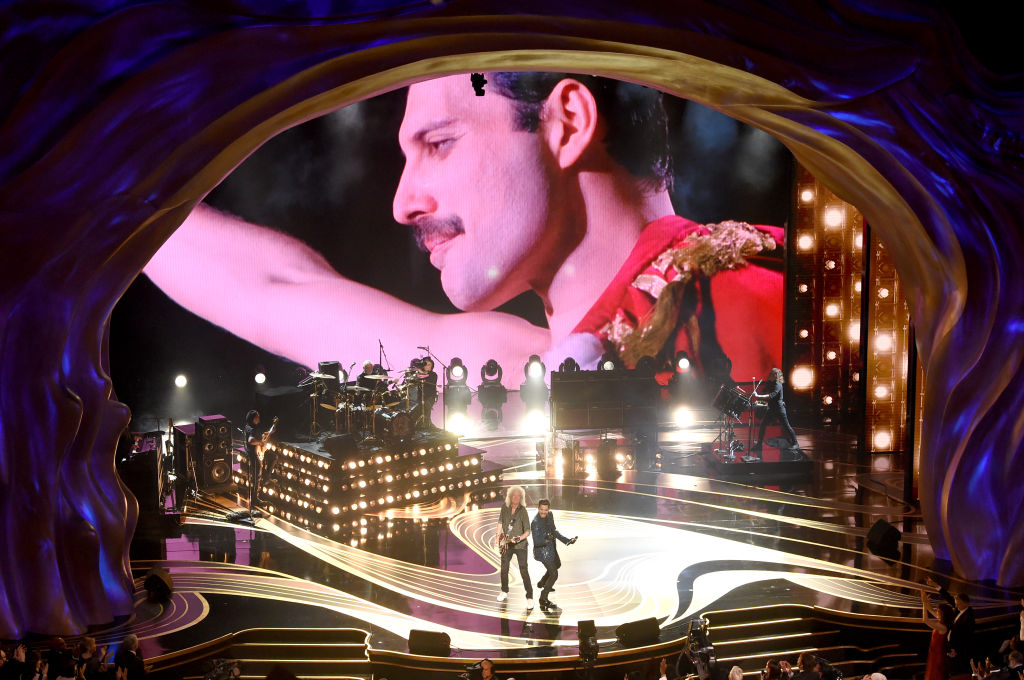 Marvel’s “Black Panther” looked like a contender by claiming a pair of early awards, and made history in the process: Ruth E. Carter and Hannah Beachler became the first African-American women to win for costume design and production design, respectively. The film was also honored for its musical score.

“Roma” didn’t walk away empty handed, earing best foreign-language film. Its director, Alfonso Cuaron, was honored for directing and cinematography for the black-and-white period drama, a deeply personal look back at the women who raised him.

Cuaron’s marks the fifth time a Mexican director has won that award in the past six years, a stretch that includes his previous win for “Gravity” in 2014.

Guillermo Del Toro — who presented the statuette to Cuaron — was the victor last year for “The Shape of Water.” The third member of the “Three Amigos,” as they are affectionately known, is Alejandro G. Iñárritu, a winner for “Birdman” and “The Revenant.”

Mahershala Ali received his second Oscar in three years for “Green Book,” and the film also won for original screenplay, despite separate controversies related to its director and writer. With his prior award for “Moonlight,” Ali becomes only the second African-American actor with multiple Oscars, joining Denzel Washington. A tearful Regina King took the first award of the night, winning supporting actress for “If Beale Street Could Talk,” director Barry Jenkins’ adaptation of the James Baldwin novel.

Beyond “Black Panther,” Marvel’s highlights included “Spider-Man: Into the Spider-Verse” swinging off with best animated movie, as the Sony release topped a pair of Disney sequels, “Ralph Breaks the Internet” and “Incredibles 2.” “Free Solo,” a hit documentary about daredevil climber Alex Honnold, topped the documentary feature category, which also included the Ruth Bader Ginsburg biography “RBG.” In their enthusiasm, one of the filmmakers blurted out an expletive that was promptly bleeped.

“Bohemian Rhapsody’s” other wins came in both sound categories as well editing. Notably, none of the “Rhapsody” winners thanked credited director, Bryan Singer, who was accused of sexual abuse in January, allegations that the filmmaker has denied.

In one of the more expected victories, the team that transformed Christian Bale into former Vice President Dick Cheney won in makeup/hairstyling for “Vice.” Visual effects, however, were something of a surprise, going to “First Man,” the moon-landing drama about Neil Armstrong.

Lacking a host, the producers relied on music and comedy bits to enliven the evening, including a duet from “A Star is Born” by Bradley Cooper and Lady Gaga — later the winner for best song — which drew a standing ovation from the Hollywood crowd.

Rudolph, Tina Fey and Amy Poehler introduced Sunday’s telecast, following Queen and Adam Lambert’s opening performance of “We Will Rock You” and “We Are the Champions.” The “Saturday Night Live” alums riffed off the messy build-up to this year’s awards.

An abundance of drama surrounded the build-up to this year’s Oscars, even before getting around to the nailbiting best-picture finish.

The contenders reflected the gamut of an evolving movie industry, with “Roma” representing Netflix’s arrival in movies, after the streaming service’s model-bending impact on the TV business.

On the flip side, “Black Panther” embodied the blockbusters upon which the studios have come to rely, and the third-highest-grossing US release of all time at $700 million, nearly doubling that total worldwide.

A number of individual nominees registered breakthroughs for women and people of color, only a few years after lack of diversity among the acting categories birthed the #OscarsSoWhite hashtag.

The Academy of Motion Picture Arts and Sciences endured a series of missteps leading up to the telecast, beginning with the proposal to introduce a “popular film” category. That idea was quickly scuttled, as was a subsequent plan to move four awards into the commercial breaks to help streamline the ceremony, which prompted a rebellion from Academy members.

In between, Kevin Hart was chosen to host the awards, before the resurfacing of homophobic social-media posts prompted the comic to withdraw. After a period of confusion, it was finally confirmed the awards would be mounted without a host, the first time that’s happened in 30 years.

Much of the tumult surrounding the 91st annual Oscars can be traced back to last year’s awards — and more specifically, a precipitous ratings decline, falling to an all-time low. Shortening the ceremony to three hours, or close to it, has been among the solutions that host network ABC has advocated as a means of stopping the bleeding from a Nielsen standpoint.