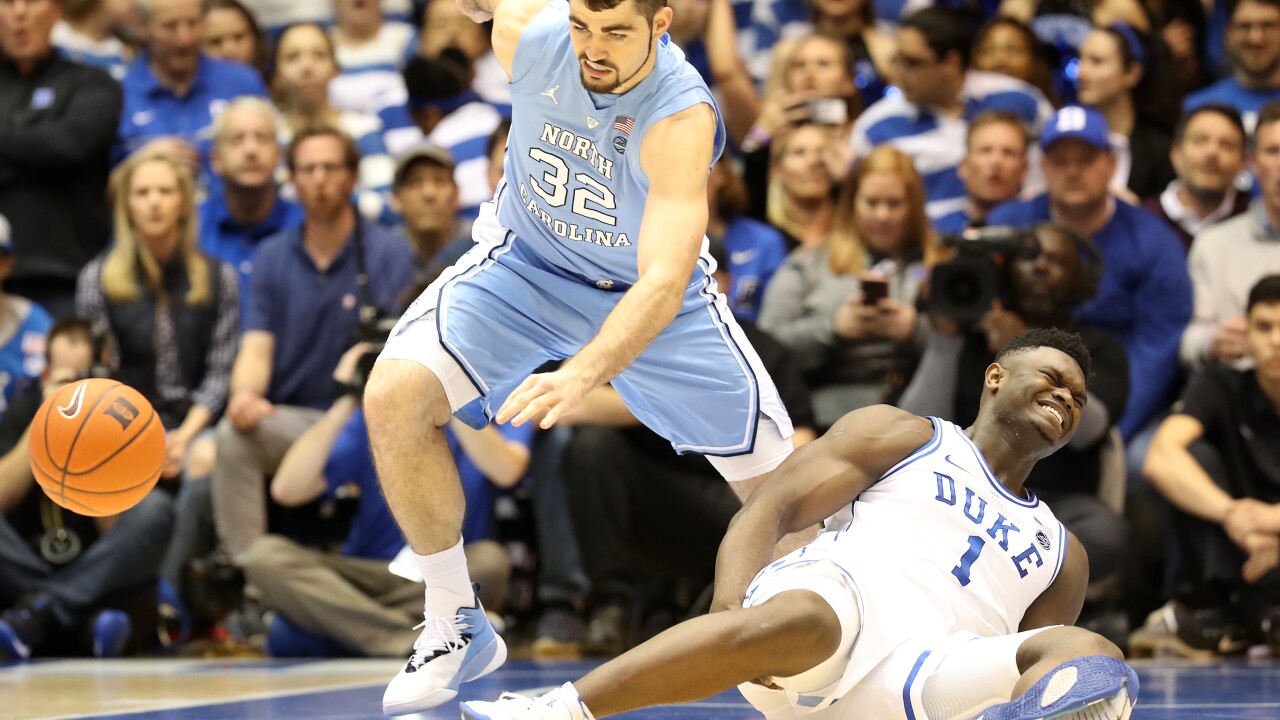 Zion Williamson #1 of the Duke Blue Devils reacts after falling as his shoe breaks against Luke Maye #32 of the North Carolina Tar Heels during their game at Cameron Indoor Stadium on February 20, 2019 in Durham, North Carolina. (Photo by Streeter Lecka/Getty Images)

Williamson, thought by many to be basketball’s brightest prospect since LeBron James, went down hard when his shoe split in half while planting his foot, forcing him off with a knee injury seconds into Duke University’s much-anticipated encounter against North Carolina.

Tickets for the game were reportedly available for over $3,000 and freshman forward Williamson — described by double NBA champion Kevin Durant as a “once-in-a-generation athlete” — was a big reason for the inflated prices.

Williamson’s top-ranked Duke side was on a nine-match winning streak, but without their 285-pound 6 feet 8 inch star player the Blue Devils fell to a 88-72 defeat Wednesday.

“Obviously, you lose a national player of the year candidate there are going to be gaps in what you have to do,” said coach Mike Krzyzewski.

Zion Williamson #1 of the Duke Blue Devils reacts after falling as his shoe breaks against Luke Maye #32 of the North Carolina Tar Heels during their game at Cameron Indoor Stadium on February 20, 2019 in Durham, North Carolina. (Photo by Streeter Lecka/Getty Images)

Obama, part of a crowd in Cameron that also included Hollywood director Spike Lee, could be seen on the sidelines pointing and saying “his shoe broke” as Williamson went down.

Nike, which exclusively supplies the university with uniforms, shoes and clothing, later issued a statement saying it was examining what caused the long rip above the sole.

“We are obviously concerned and want to wish Zion a speedy recovery,” read the statement.

“The quality and performance of our products are of utmost importance. While this is an isolated occurrence, we are working to identify the issue.”

Obama later tweeted: “Zion Williamson seems like an outstanding young man as well as an outstanding basketball player. Wishing him a speedy recovery.”

Luke Maye scored 30 points for UNC and Cameron Johnson contributed 26 for the No. 8 ranked Tar Heels. Both teams currently trail Virginia in the Atlantic Coast Conference.

“The preparation you would have for the game is obviously based on your players being there,” added coach Krzyzewski, who expects Williamson to be absent for Saturday’s game against Syracuse.

“It puts everyone in a state of trying to figure it out while you’re playing an outstanding team. That’s not a good situation.

“I thought our guys really played hard in the first half. We were knocked back after that injury, you could see it.”