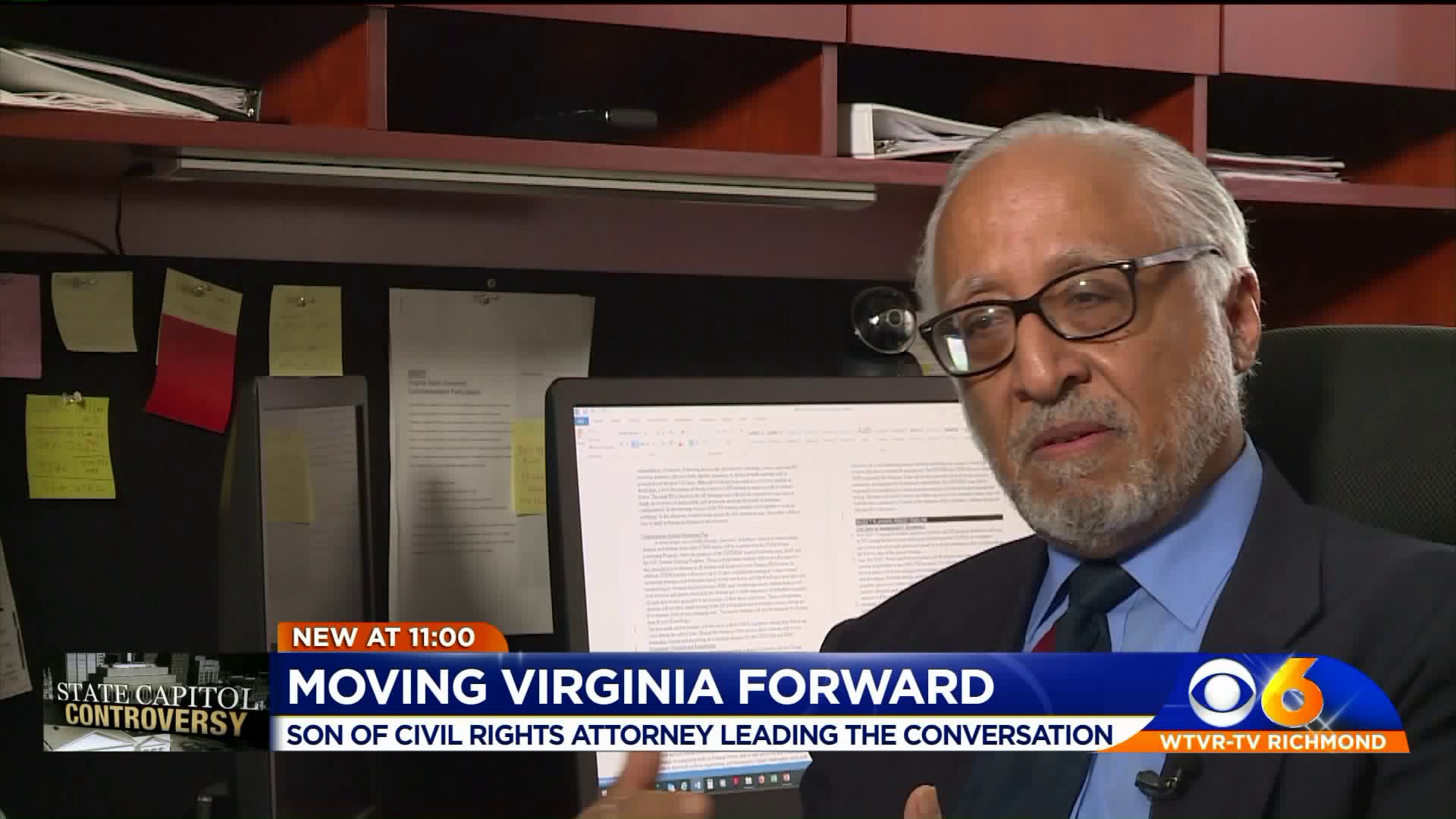 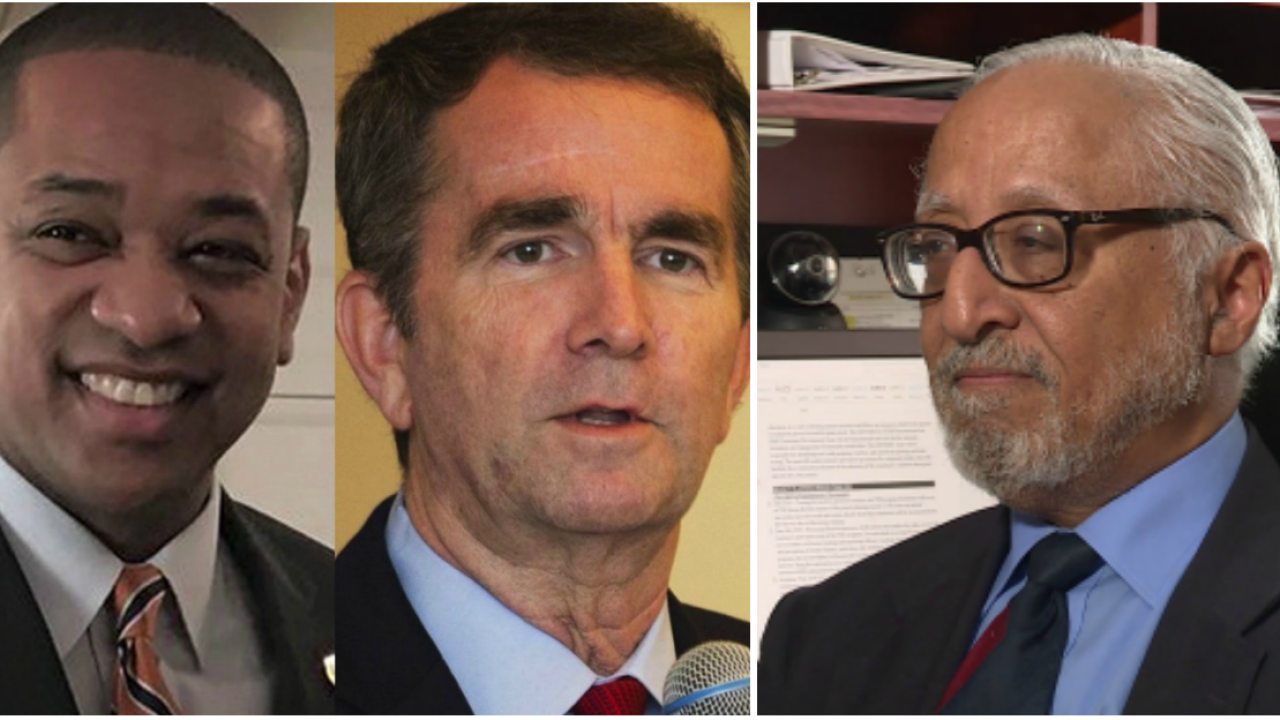 RICHMOND, Va. --  As the cloud of controversy covers Virginia's government, the question "what comes next?" may not have a clear answer politically.  Still, some community leaders say the scandals present an opportunity to have frank conversations about racial injustice and sexual consent.  The son of a Virginia civil rights icon thinks this moment in history is an opportunity to "delve into some of the shadier parts of the past of Virginia and see where we can go from here."

For more than a week, calls for resignations and impeachment and criminal investigations have echoed around Capitol Square in Richmond, as all three top elected in Virginia are on the hot seat.

Governor Ralph Northam and Attorney General Mark Herring have both admitted to wearing blackface in the early 1980's.  Lieutenant Governor Justin Fairfax has been accused of sexual assault by two women.

Northam and Herring have both apologized, and Fairfax has said both encounters were consensual.

While new developments seem to emerge every hour, one figure on Capitol Square stands still, a stoic presence in the midst of all the chaos.

Just yards away from the Executive Mansion, the Virginia Civil Rights Memorial includes a statute of Oliver Hill, a Richmond attorney who battled Jim Crow laws and fought to integrate schools.

Hill died in 2007 at the age of 100, but what would he have to say about the controversies rocking the Capitol in his hometown?

A local college professor can venture a very educated guess.  Dr. Oliver Hill Jr., the son of the civil right hero, is a psychology professor at Virginia State University.  Like his father, Dr. Hill is a respected voice in the community.

"I have thought about that a lot. . . [my father] was really big on history, and people understanding history," Dr. Hill said.

Dr. Hill said the situation at the Capitol was messy from the jump, but Northam and Fairfax made things worse when they attempted to clean things up.

"There was both this kind of denial and this wanting to absolve themselves of blame," Dr. Hill said.  "There’s a tone deafness that was exhibited."

Dr. Hill said he believes in second chances, but thinks Northam and Fairfax cannot effectively take part of that healing process while holding office.  Still, Dr. Hill said the 400th anniversary of enslaved Africans landing in Virginia creates a unique opportunity for honest conversations about history and the voices that have been excluded.

"For the most part you know Virginia has done some things moving in that direction, in terms of acknowledging its own history.  Things like the civil rights memorial on Capitol Square is an acknowledgement of a period, and I think a good first step, so we’ve kind of begun that process we just need to go a little bit deeper," Dr. Hill said.  "Having kind of an honest and open discussion of history from everybody’s vantage point, I mean, the vantage point of native people, the vantage point of African Americans, the vantage point of other immigrant groups that have come in."

Susheela Varky and Jonathan Yglesias have also been keeping a close eye on the unfolding scandals.  Both spend time at the General Assembly advocating on behalf of victims of sexual and domestic violence.

"I think the Me Too movement has done incredible work to kind of shed light on how this happens, when it happens, and who’s most vulnerable to victimization," said Yglesias, who works for the Virginia Sexual and Domestic Violence Action Alliance.

Some people, including the Lt. Governor, have questioned the timing of the allegations against Fairfax.  Dr. Vanessa Tyson came forward after media reports about her story surfaced on the internet and a few days after calls for Governor Northam's resignation began.

Varky and Yglesias said people questioning the timing of accusations of sexual assault should consider putting themselves in the survivor's shoes.

"I can understand where you’re coming from in thinking ‘why is this only coming forward now?’" Varky said.  "But if you can put yourself in the person’s shoes, maybe they didn’t feel like anyone would believe them? Maybe they felt like they were somehow culpable because they too were drinking, or they wanted the person to kiss them, but not necessarily the next thing that happened.”

Both advocates said they take issue with the public's knee-jerk response to allegations of sexual misconduct that typically includes rushing to one corner or the other.  They cautioned against automatically presuming the worst about someone.

"We can both believe survivors and respect the fact that a story is being share, and also agree that someone is not necessarily disposable of or that a judgment doesn’t need to be passed immediately," Yglesias said.

Often lost in the conversation surrounding sexual misconduct is discussion of consent, Varky said.  Both advocates said their hope for the moment is that families and friends take the opportunity to discuss the importance giving and receiving consent before a sexual encounter.

"I think what you’re talking about is exactly why we need to talk about what consent looks like.  How to vociferously express that I am consenting to something, and to say I hear you, I understand that, and now we can go to the next step," Varky said.

Sexual assaults happen more frequently than the number of reports to law enforcement, both advocates said.  They added that usually family and friends need to ready to compassionately discuss what a survivor needs and connect them with resources, if wanted.

Professionals are ready to help families and survivors at both the Virginia Sexual and Domestic Violence Action Alliance and the Virginia Poverty Law Center.  For help 24-hours a day, survivors can call 1-800-838-8238 or text 804-793-9999.

Jonathan Zur has been thinking about difficult conversations recently.  Zur is the President of the Virginia Center for Inclusive Communities.

“If this is 400 years in the making, it’s not going to be resolved in two weeks," Zur said.  "I think healing is work that take persistence.  It requires us to stay focused."

Zur is hopeful Virginians will take this moment to have uncomfortable and frank conversations about race.

“I think that I often will ask folks who are concerned about saying the wrong thing, what’s the worst thing that can happen if you say the wrong thing? They’ll say, well, someone might think I’m racist or I’ll feel badly if maybe I didn’t intend to say it that way, maybe a friendship will be ruined.  Then I’ll say, what’s the worst thing that will happen if you say nothing at all?  Generally, the response is nothing changes.  If those are the stakes, this is a moment where folks need to lean in, need to educate themselves, need to be part of the conversation, and need to be committed to action," Zur said.

Dr. Hill believes fully exploring, not matter how painful, is the best way to move forward.

"Right now there is a lot of national embarrassment, and so how can we turn that around?" Dr. Hill said.  "Looking into those dark corners isn’t dishonoring America."

Dr. Hill sees the scandals rocking Virginia as a teachable moment in history and thinks his father would have agreed.

"That would have been his take on it, I believe.  Let’s use this as an opportunity to delve into some of the shadier parts of the past of Virginia and see where we can go from here."