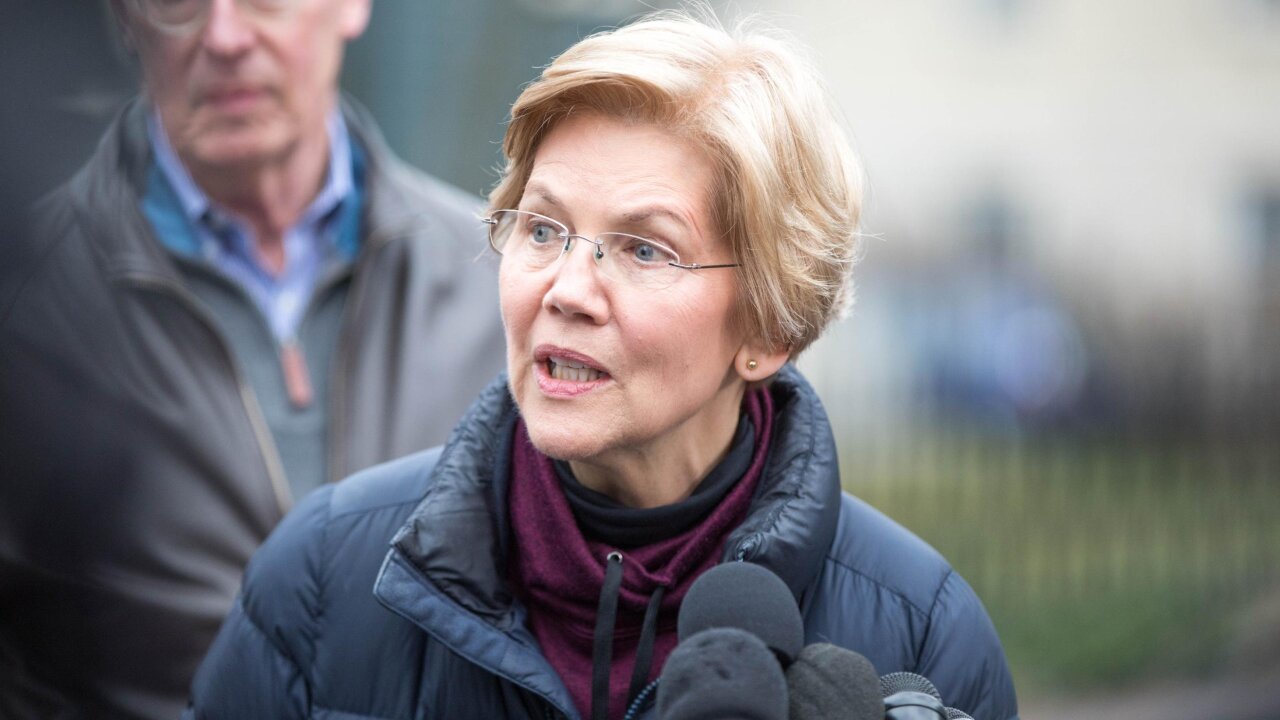 Sen. Elizabeth Warren (D-MA), addresses the media outside of her home after announcing she formed an exploratory committee for a 2020 Presidential run on December 31, 2018 in Cambridge, Massachusetts.

Senator Elizabeth Warren, at a rally outside a mill in Lawrence, Massachusetts, has officially announced she is running for the Democratic nomination for president.

Warren told the crowd on Saturday, “It won’t be enough to just undo the terrible acts of this administration. We can’t afford to just tinker around the edges — a tax credit here, a regulation there. Our fight is for big, structural change. This is the fight of our lives. The fight to build an America where dreams are possible, an America that works for everyone. I am in that fight all the way. And that is why I stand here today: to declare that I am a candidate for President of the United States of America.”

The formal start of Warren’s White House campaign comes as the Democratic primary intensifies by the day, with numerous candidates including Sens. Kamala Harris and Cory Booker already in the race, and others, like Sens. Bernie Sanders and Amy Klobuchar, expected to jump in soon.

Warren plans to unveil a new, high-profile backer in Rep. Joseph P. Kennedy III​ on Saturday, who will ​endorse his former professor at the outdoor event. According to multiple sources familiar with the plans, Kennedy will discuss why he believes ​Warren’s record on economic issues should set her apart from the rest of the​ ballooning 2020 presidential​ field.

In addition to Kennedy, other members of the Massachusetts delegation will also speak at the rally, sources told CNN, including Sen. Ed Markey, Rep. Lori Trahan, Lawrence Mayor Dan Rivera and Boston City Councilor Michelle Wu. All are expected to indicate their official support for Warren’s campaign.

The senator will be joined by family, including her husband, Bruce, and her two children. Some of her grandchildren are also expected to be in attendance.

​Kennedy’s decision to throw his support to his home state senator — and not his good friend, former Rep. Beto O’Rourke, who is considering a bid of his own — is a clear signal to fellow Democrats that she remains a serious primary contender despite a politically trying week.

In the days leading up to Saturday’s announcement, Warren has been weighed down by new questions over her past claims to Native American heritage. The Washington Post reported that Warren wrote in 1986 that her race was “American Indian” in a Texas state bar registration card, adding to the list of instances in which the senator self-identified this way.

The disclosure prompted yet another public apology from the senator, just days after she had expressed remorse to Cherokee leaders for using a DNA test last year to try to show her Native American ancestry.

A Monmouth University poll showed Warren get a boost in national support after she announced her exploratory campaign at the end of last year. But it’s not yet clear whether the revival of the Native American controversy on Wednesday could hurt public opinion of the senator.

Warren will again seek to turn the page on the controversy with Saturday’s announcement and a six-state tour to follow.

After Lawrence, Warren is set to travel north to campaign in New Hampshire before flying to Iowa for a three-stop tour across the state on Sunday — her second visit to the ​Hawkeye State since ​announcing the formation of an exploratory campaign on New Year’s Eve. Later in the week, Warren plans to ​visit South Carolina, Georgia, Nevada and California.

The campaign’s decision to stage the senator’s first campaign rally in Lawrence, a former industrial mill town, ​highlights the key constituency groups she hopes to appeal to in her campaign, including immigrants, women, working class families and union members.

​In 1912, textile workers in Lawrence​, many of them ​immigrant women, walked off the job and went on strike​ to protest wage cuts. In an email to supporters last week, the campaign wrote: “Underpaid, overworked, and flat-out exploited workers from more than 50 countries gave Lawrence the nickname ‘Immigrant City.'”

W​arren has been fiercely critical of the Trump administration’s immigration policy, particularly in light of the separation of migrant children from their families at the border.

“I think we need immigration laws that focus on people who pose a real threat and I don’t think moms and babies are the place that we should be spending our resources. Separating a momma from a baby does not make this country safer​,” Warren said in an interview with CNN last summer, a message she has returned to during her time on the campaign trail.

Two weeks ago, Warren added more meat to her platform, introducing a new “wealth tax” on Americans with assets ​valued at $50 million or more​.​

​The​ plan​, according to documents provided by the campaign,​ would impose a 2% tax on Americans whose net worth exceeds $50 million​. B​illionaires​ would pay an additional 1%​. Viewed alongside a new proposal from Sanders to hike the estate tax, Warren has positioned herself at the center of the progressive push to reduce corporate influence in Washington and economic inequality across the country​.​

​But even as Warren sharpens her policy positions and political message, ​​the specter of additional, previously undisclosed examples of Warren labeling herself Native American ​o​n professional forms​ looms in the background​. ​Warren did not address the potential for another distracting revelation when asked ​by reporters ​on Capitol Hill this week​.

Another unanswered question: whether the dust-ups will permanently undermine Warr​en’s campaign. Tribal activists, who were sharply critical over DNA test and earlier refusal to address the harm it might have done to their interests, have mostly welcomed her apologies.

And some Democrats in early voting states have seemed unfazed.

Collette Richard, an 18-year-old Des Moines resident and registered Democrat, reacted to the Washington Post story by saying she does not believe the issue should sway voters.

“I mean, your nationality or heritage shouldn’t have anything to do with it, it should be your political views and where you stand as an American citizen — that should pretty much lead you to make your decision,” Richard said.