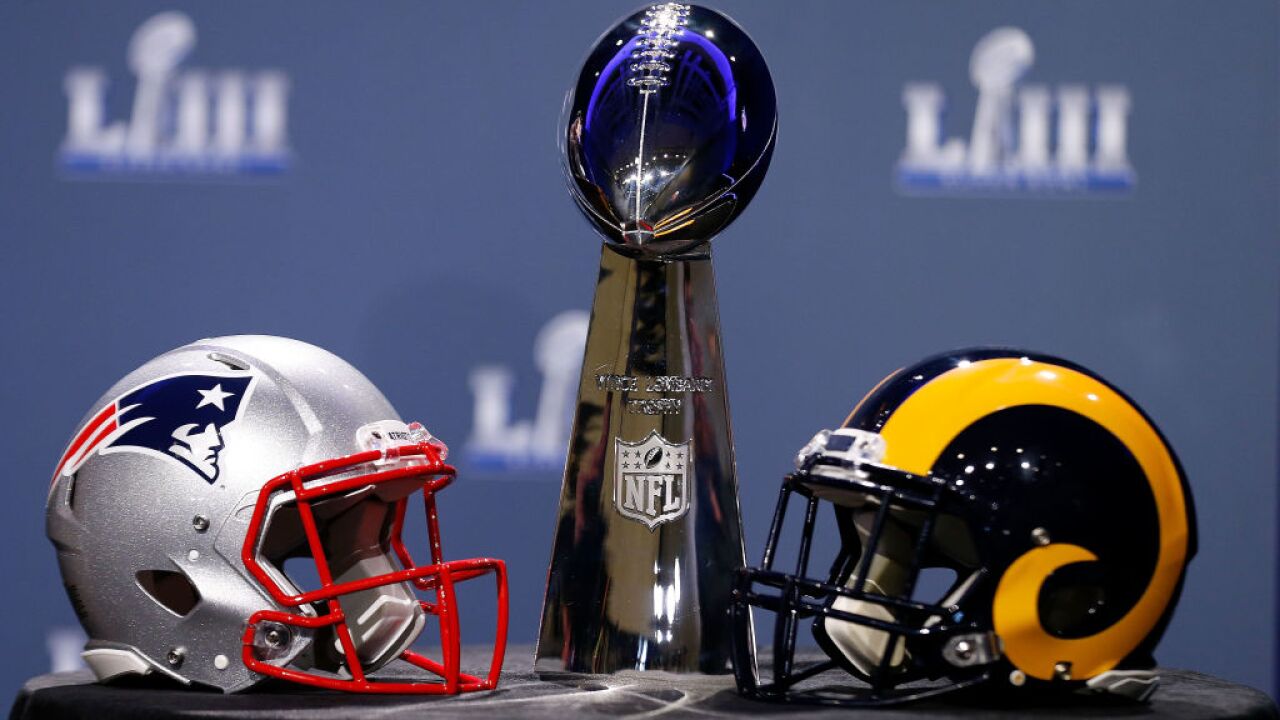 ATLANTA, GA – JANUARY 30: Detail of the Lombardi Trophy and the helmets of the New England Patriots (left) and the Los Angeles Rams prior to NFL Commissioner Roger Goodell speaking during a press conference during Super Bowl LIII Week at the NFL Media Center inside the Georgia World Congress Center on January 30, 2019 in Atlanta, Georgia. (Photo by Mike Zarrilli/Getty Images)

And you thought this Sunday was just the day for all Americans to do their patriotic duty to sit on their couches and eat and yell at the TV. But, no, not even the Super Bowl can avoid the political vortex.

President Donald Trump is set to appear on CBS’s pregame show. Expect him to brag again “about his love for owner Robert Kraft, coach Bill Belichick, quarterback Tom Brady,” wrote Atlanta sportswriter Terence Moore, “and nearly everybody else associated with an NFL franchise that more than a few folks beyond Boston Harbor can’t stand.”

“Go ahead, America,” Moore concluded. “You have my permission to pull like crazy Sunday for the Los Angeles Rams over the Patriots.”

Roxanne Jones says she will be cheering for another reason, too. The big game gets its first male cheerleaders this year — Quinton Peron and Napoleon Jinnies, on the Rams squad. The news reminded her of her childhood friend Trevonce, a boy “whose biggest dream was to be a high school cheerleader.” But that was forbidden for boys back then, and options for girls were narrow, too. She remembers having to “pick a side — girly-girl or tomboy.” “Good riddance,” she wrote, “to rigid rules of gender roles that betray the dreams of little girls and boys and rob them of their full humanity. Let’s tear them all down.”

Can’t stand football? How about puppies? Alice Driver directs you to the Puppy Bowl — before the game, on Animal Planet — which she said is more than just a frivolous distraction. “The Puppy Bowl, which puts every puppy who participates up for adoption, uses its platform to dare us to adopt instead, making the poignant case that adopting a pet is saving a life.”

Talk about spoiler alerts: This week Howard Schultz, the former Starbucks CEO, said he wanted to run for president, giving many Democrats cold-brew chills at the thought of a third-party billionaire splitting the vote and throwing the 2020 election to Donald Trump. “If Schultz’s goal is breaking free of the polarized politics of the Trump presidency, he should understand that his independent candidacy could wind up prolonging it,” commented Kevin Kruse and Julian Zelizer.

Cue the goading Trump tweet (“Howard Schultz doesn’t have the ‘guts’ to run for President!“), the Twitter ratioing and the outrage from the left. “I hope this guy wastes a lot of money and drops out by the end of the year,” tweeted Jamelle Bouie. And Bette Midler observed: “#HowardSchultz is a reminder of how wealthy, opinionated white guys are just like Starbucks: there’s one on every ****ing corner.”

Face it, wrote Marc Thiessen in The Washington Post. Progressives are just mad because “Schultz is calling Democrats out for how radical their party has become.”

Historian Jeremi Suri offered a word of caution. Historically, third-party candidates “did not play spoiler to particular candidates; they were reflections of the weaknesses of the main-party candidates from the start.” An independent like Schultz will deepen our debate as he shakes it up.

Sen. Cory Booker stepped into the presidential race Friday, the first day of Black History Month. Julian Zelizer paused to note the “stunning” diversity of Democrats lining up for 2020: four women, one African-American and another Hindu; one gay married man; a son of Taiwanese immigrants; a Latino who is the son of immigrants — and now Booker, an African-American former mayor of Newark, New Jersey. “This is not your grandfather’s Democratic Party anymore. In fact, it is Obama’s party.”

And what about Beto? Beto O’Rouke may look like he hails from your grandfather’s Democratic Party, but he is something altogether new, wrote David Axelrod. “Beto O’Rourke is driving the political class nuts.” O’Rourke’s ruminative road tripping could teach the presidential field about shattering political shibboleths, about genuine empathy and the need for an authentic narrative that can unite and lift a divided country, wrote Axelrod. “As his miles and word counts mount, they are beginning to add up to a powerful predicate for a presidential candidacy, should he decide to launch one.”

For the moment, though, it’s Sen. Kamala Harris’s race, insisted Jill Filipovic. At a CNN town hall with Jake Tapper on Monday, Harris “was fluid and engaging … and took solidly left positions on a slew of important topics.” Still, questions about her history as a prosecutor are shaping up as “a weakness for an otherwise resolutely progressive candidate.”

The threat that intelligence chiefs didn’t worry about

A day after Trump’s intelligence chiefs told the Senate Intelligence Committee that there was no national security crisis at the southern border, that North Korea was not abandoning nuclear weapons and Iran was not building them, Trump tweet-trashed them as “extremely passive and naïve.” But America should be reassured by their willingness to publicly contradict the President, wrote Josh Campbell, impressed that they “will not be bullied into shaping their views of the world to fit the political whims of a politician.”

English as an only language

Discussing immigration on “Meet the Press” on Sunday, Tom Brokaw put his pie in his boca. “The Hispanics should work harder at assimilation,” he said, and their kids should speak English. A similarly inclined Duke University professor, Megan Neely, sent an email urging Chinese students to speak English “100% of the time.”

It’s not that these two are racist, wrote Issac Bailey, they’re just wrong. He called out their “tradition bias” — the old, bad idea that “being white is the default right, true and wise way to live in America.”

But Rich Lowry, in the National Review, said that “what Brokaw was getting at — the importance of assimilation to cultural cohesion — should be uncontroversial.”

Brokaw himself was contrite, tweeting, “i feel terrible a part of my comments on Hispanics offended some members of that proud culture.”

Medicare for all: Could it happen?

Kamala Harris put it out there again this week — Medicare for All — and appeared to be floating the idea of eliminating private insurance. Political Twitter blew up. “There’s a reason (Democrats) haven’t gone there” before, tweeted Jonathan Chait. Howard Schultz slapped it down as “not American” and Michael Bloomberg suggested it “would bankrupt us for a very long time.”

Economist Dean Baker was not so sure. If France, Denmark and Canada can afford universal coverage, so can the US, wrote Baker. “The question is whether we have the political commitment to bring it about.”

What was Whitaker thinking?

Former prosecutor Elie Honig answered reader questions on the Mueller investigation this week, including: What was Acting Attorney General Matthew Whitaker thinking when he told reporters that the probe is “close to being completed”? Among other things, such an announcement signals to targets or witnesses “that a prosecutor is under time pressure to wrap up,” giving them “good strategic reason to slow-play, to drag their feet, to wait it out,” Honig wrote. He hoped Whitaker’s was just a “rookie-level” mistake, and “not something worse.”

Honig is answering reader questions on the Mueller probe and more. (Send your questions to: CNN.opinion@turner.com.)

Nearly half of American adults didn’t vote in the last presidential election, a turnout that placed the US 26th out of 32 developed countries. So it makes no sense, wrote law professor Joshua Douglas, that Senate Majority Leader Mitch McConnell would — from the Senate floor and also in a Washington Post op-ed — savage a Democratic bill to bring America’s elections into the 21st century. HR1, The For the People Act, would make Election Day a federal holiday, but that’s just one element, Douglas asserted. States and localities are already seeing success with many of the bill’s ideas to modernize elections and encourage voting. “Isn’t that something that all sides should want?”

Eight months ago, the Saudi women’s rights advocate Loujain Alhathloul was arrested in Saudi Arabia while she was setting up a domestic violence shelter there, her brother, Walid Alhathloul, wrote. Since then, he said, she has been whipped, beaten, electrocuted and threatened with sexual assault.

Mariah Carey was performing in Saudi Arabia last week, “a pathetic attempt to show that the country is becoming more tolerant toward women,” he said. “Now that I told you the story of my sister, will Mariah Carey call for her release on stage?” Carey did not.