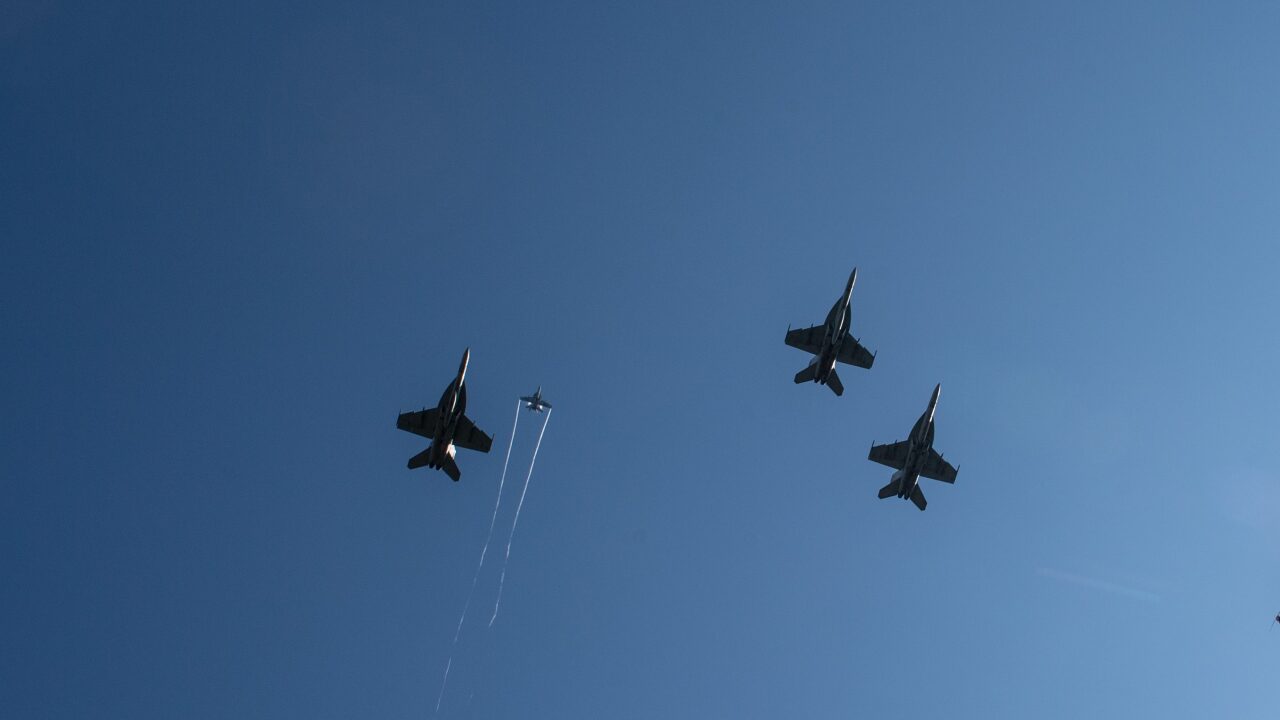 ANNAPOLIS, MD – SEPTEMBER 2: In this U.S. Navy handout, F/A-18 Super Hornets from Strike Fighter Squadrons (VFA) 31, VFA-32, VFA-87 and VFA-105 honor the late Sen. John McCain with a fly-over of the United States Naval Academy during his burial service, September 2, 2018 in Annapolis, Maryland. The aircraft were in missing man formation, which consists of four aircraft in a formation shape of a “V” with the right arm, from the pilots’ perspective, longer than the left. When the “V” passes over the ceremonial site, the aircraft in the “ring-finger” position pulls up and leaves the formation to signify a lost comrade in arms. (Photo by Mass Communication Specialist 2nd Class Nathan Burke/U.S. Navy via Getty Images)

NORFOLK, Va. — The U.S. Navy announced its first ever all-female flyover will be conducted to honor the life and legacy of a female pioneer in Naval aviation.

Officially referred to as a “Missing Man Flyover,” the tribute will be part of the funeral service for retired Navy Captain Rosemary Mariner, who passed away on January 24 following a long and brave fight with cancer.

Mariner completed flight training in 1974, where she was then designated a naval aviator and received her Wings of Gold to became the Navy’s first female jet pilot, flying the A-4E/L “Skyhawk” and the A-7E “Corsair II”.

She also was the first female military aviator to achieve command of an operational air squadron.

During her time with the Navy, Mariner was monumental during Operation Desert Storm. She also became one of the first women to serve aboard a U.S. Navy warship (USS Lexington) and qualify as a Surface Warfare Officer.

All of the aviators participating in the flyover are from squadrons based at Naval Air Station (NAS) Oceana and will be flying F/A-18E/F “Super Hornets,” the Navy said.

Here are the participants:

The flyover will take place on Saturday, February 2 in Maynardville, Tennessee.