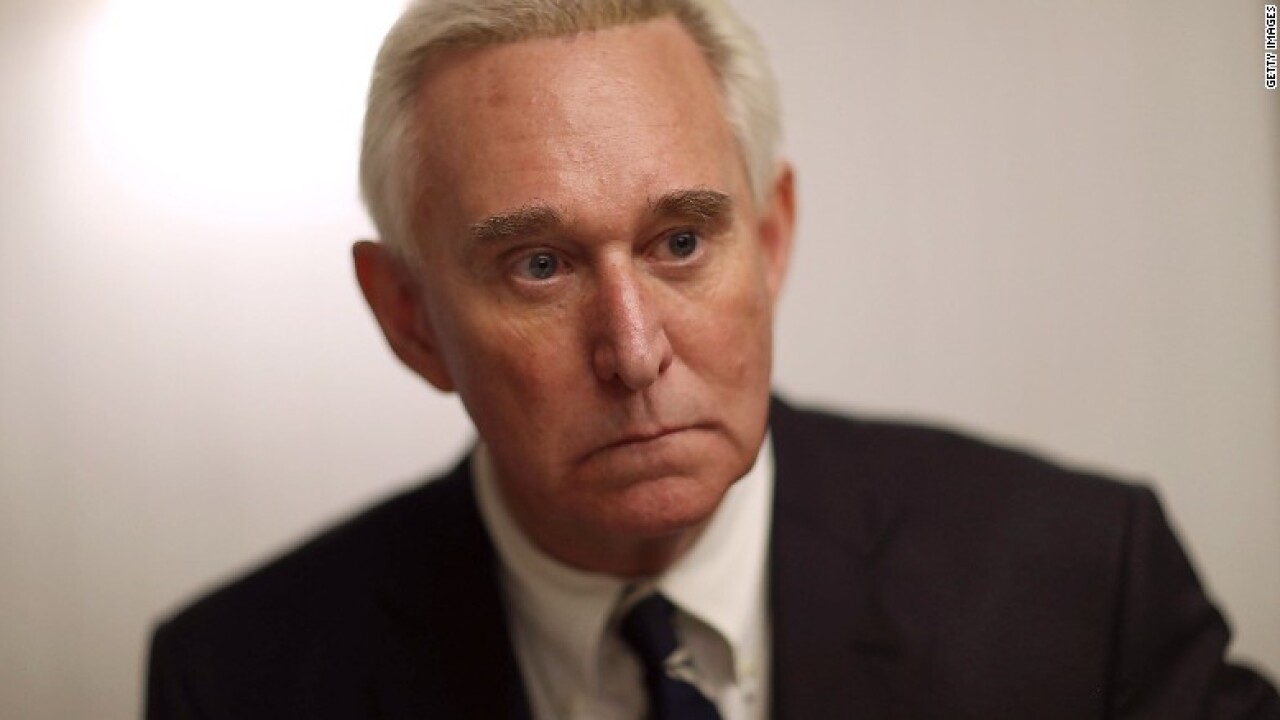 FORT LAUDERDALE, Fla. — Roger Stone has been indicted by a grand jury on charges brought by special counsel Robert Mueller, who alleges that the longtime Donald Trump associate sought stolen emails from WikiLeaks that could damage Trump’s opponents while in coordination with senior Trump campaign officials.

The indictment’s wording does not say who on the campaign knew about Stone’s quest, but makes clear it was multiple people. This is the first time prosecutors have alleged they know of additional people close to the President who worked with Stone as he sought out WikiLeaks founder Julian Assange.

Stone was arrested by the FBI Friday morning at his home in Florida, his lawyer tells CNN. He was indicted Thursday by a federal grand jury in the District of Columbia on seven counts, including one count of obstruction of an official proceeding, five counts of false statements, and one count of witness tampering.

The FBI also executed a search warrant at Stone’s New York residence, according to Kristin Davis who shares the duplex with Stone.

Stone’s attorney, Grant Smith, told CNN in a statement that Stone’s misstatements were due to forgetfulness and were “immaterial.” He also said Stone did not receive materials from WikiLeaks ahead of their public release.

“They found no Russian collusion or they would have charged him with it,” Smith said.

Jay Sekulow, an attorney for the President, told CNN in a statement: “The indictment today does not allege Russian collusion by Roger Stone or anyone else. Rather, the indictment focuses on alleged false statements Mr. Stone made to Congress.”

Stone appeared in federal court in Fort Lauderdale late Friday morning. He was released on a $250,000 signature bond.

On October 7, 2016, after WikiLeaks released its first set of then-Clinton campaign chairman John Podesta’s emails, prosecutors say Stone received a text message from “an associate of the high-ranking Trump campaign official” that said “well done,” signaling that the Trump campaign was looped in on Stone’s quest for dirt on Democrats.

The associate and the high-ranking campaign official are not named in the complaint, though the indictment describes how Stone told a reporter that what Assange had in the unreleased emails was good for the Trump campaign. Stone responded at the time, “I’d tell [the high-ranking Trump Campaign official] but he doesn’t call me back.”

An email matching that wording that was published by The New York Times shows that the official Stone referred to was Steve Bannon.

After the October 7 releases, Stone boasted to “senior Trump Campaign officials” that he had correctly predicted the data dump, prosecutors say.

However, the indictment doesn’t detail direct communication Stone or others may have had with Assange.

Stone has maintained publicly that he did not know in advance about what WikiLeaks would release. That alleged lie, which he also told to Congress, forms the basis for some of his other criminal charges in Friday’s indictment.

The indictment unsealed Friday after Stone’s arrest makes clear he communicated with multiple people about what Assange knew, and they were providing him updates from Assange and what Stone wanted to communicate with him. Prosecutors cite text messages and emails he exchanged with the people about what Assange had, and one sent a photo of himself standing outside the Ecaudorian embassy in London, where Assange has stayed for years.

The men passed on much of the information after WikiLeaks began speaking publicly about stolen documents it had but before all had been released.

According to previous reporting, those people included radio host Randy Credico and Jerome Corsi. They are unnamed in the indictment and have not been charged with crimes.

Stone also communicated with a “supporter involved with the Trump Campaign” via a text message about what else Assange had.

Stone was also indicted on a witness tampering charge for his alleged attempts to sway Credico’s story before he testified to Congress — even tapping into language from mob movies and citing disgraced President Richard Nixon, who Stone once worked for.

Credico is identified as “Person 2” in the indictment — one of the people who was communicating with Stone about what Assange knew — his lawyer, Martin Stolar, confirmed to CNN.

“Randy is a witness,” Stolar said, and will testify if needed in proceedings involving Stone.

Stone has claimed that Credico, a progressive New York political activist and radio host, served as his backchannel to WikiLeaks during the 2016 campaign. Credico has denied that he acted as an intermediary.

Over text message, Stone told Credico, “‘Stonewall it. Plead the fifth. Anything to save the plan’ … Richard Nixon,” prosecutors said. Stone warned Credico he would get “indicted for perjury” because he could contradict Stone’s testimony. “And if you turned over anything to the FBI you’re a fool,” Stone told Credico later via text.

Multiple times, Stone told him to do a “Frank Pentangeli,” a reference to a “The Godfather: Part II” character who was a former Corleone ally who later feigns innocence to Congress before killing himself.

He also called him “a rat” and a “stoolie,” prosecutors say. He threatened to take away Credico’s dog — a fluffy white therapy pet named Bianca who even later went with Credico into his grand jury appearance — and told him “Prepare to die [expletive],” prosecutors wrote.

Credico pleaded the Fifth Amendment and did not answer questions in a House Intelligence Committee interview.

Those communications led to a witness tampering charge against Stone.

About a dozen officers with heavy weapons and tactical vests fanned out across Stone’s lawn.

Law enforcement shined a flashlight into Stone’s front door before one officer rapped against it, shouting, “FBI. Open the door.”

A floor light turned on and moments later, Stone appeared in the front entryway. He confirmed who he was to law enforcement.

Sanders says Stone indictment has nothing to do with Trump

White House press secretary Sarah Sanders insisted Friday that the indictment of President Donald Trump’s longtime associate Roger Stone has nothing to with the President.

Sanders was asked several times by CNN on Friday if the President was the one who directed a senior campaign official to contact Stone.

She reiterated each time that the charges against Stone “have nothing to do with the President.”

“When you want to get into specific questions, you’ll have to talk to the President’s outside counsel on that,” she said, adding that she hadn’t read the indictment against Stone.

Sanders also told CNN that she was not aware of the White House receiving any notice from the Justice Department that the FBI would arrest Stone Friday morning.

When pointed to the fact that Stone is the sixth Trump associate charged in the Mueller investigation, Sanders said all the charges against each individual do not have anything to do with Trump.

“Just because they had some association with the President at some point doesn’t mean things that they did in their private lives and their personal lives that may or may not have been right or wrong, that doesn’t have anything to do with the President,” she said.

Trump’s former personal attorney Michael Cohen pleaded guilty and was sentenced to three years in prison for crimes that included two campaign finance violations tied to payments he made or helped arrange to silence two women who claimed to have had affairs with Trump.

Prosecutors said Cohen “acted in coordination with and at the direction of” Trump, who has denied the affairs and directing Cohen to break the law.