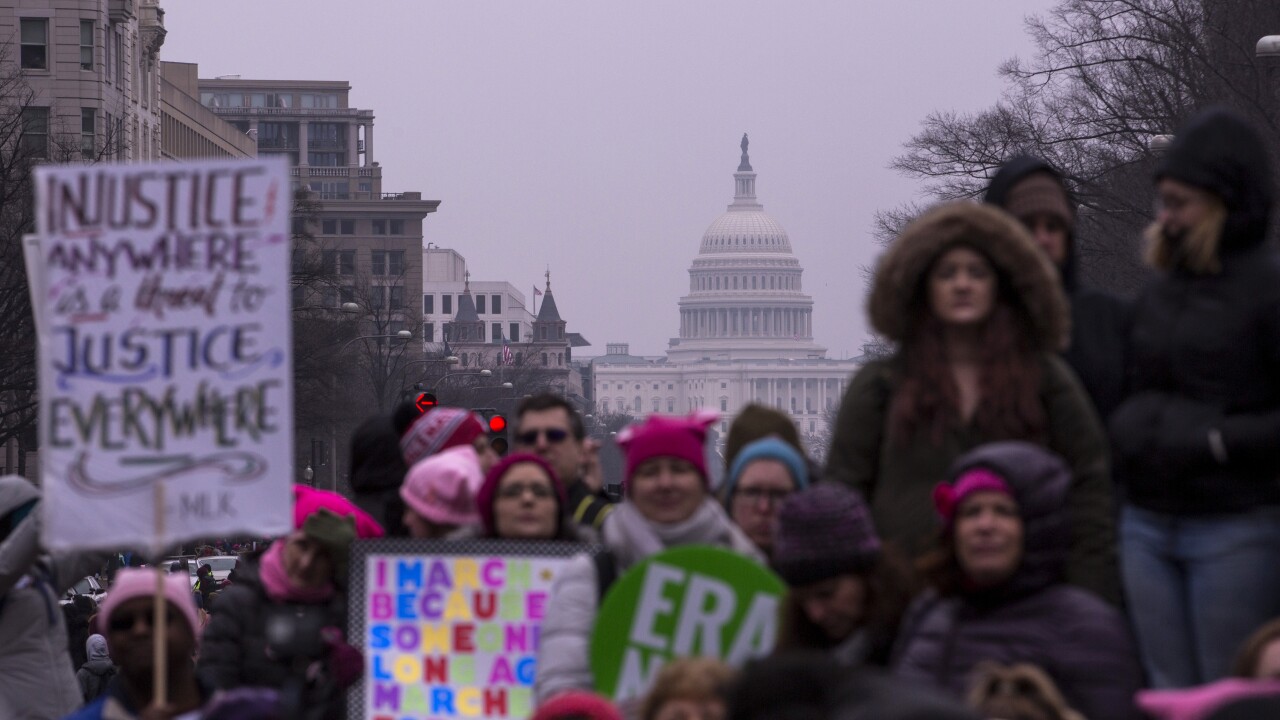 Demonstrators gather at Freedom Plaza during the 2019 Women’s March on January 19, 2019 in Washington, DC. Demonstrations are slated to take place in cities across the country in the third annual event aimed to highlight social change and celebrate women’s rights around the world. (Photo by Zach Gibson/Getty Images)

WASHINGTON — Thousands of demonstrators gathered Saturday for the Women’s March in Washington and related rallies across the country, with many looking to channel two years of momentum and common cause against President Donald Trump into progressive policies.

The marches come as allegations of anti-Semitism against the leaders of the national Women’s March Inc. and the main Washington march — which those leaders have denied — pushed some rally organizers in other cities to disassociate themselves from that group.

In Washington, leaders of the national group addressed the controversy on stage at Freedom Plaza.

Demonstrators gather at Freedom Plaza during the 2019 Women’s March on January 19, 2019 in Washington, DC. Demonstrations are slated to take place in cities across the country in the third annual event aimed to highlight social change and celebrate women’s rights around the world. (Photo by Zach Gibson/Getty Images)

“I vow to anyone who doubts their place in the Women’s March: You are welcome here. I vow to Jewish women: There is a place at the table for you.”

Now in their third year, the rallies appear less star-studded than in 2017 or 2018. But marchers still flocked to Washington, New York and elsewhere — with some of the events affiliated with Women’s March Inc. and others not.

Before the rally in Los Angeles, Yanti Palleschi sat at a table and joined others who were writing messages on placards.

“I come every year. I’m proud of the work (that) women have done in the last election, but we need more powerful women,” said Palleschi of Sherman Oaks, California, and a member of a nonprofit for women.

In Washington, Gina Lopez and her daughter Leah said they had booked their flights from Houston the day after Brett Kavanaugh’s Supreme Court confirmation hearings ended.

These marches stem from the ones that started in January 2017 as a display of resistance to Trump’s election. In 2018, the movement shifted to focus on midterm elections.

This year, organizers say, is about not only commemorating victories such as unprecedented wins for the Democratic Party by women of color in the midterms, but also agitating for progressive laws and positions they say will benefit women across race, class, sexual orientation and other identities.

That includes pushing for a policy document they call the “Women’s Agenda,” addressing issues including immigrant rights, violence against women, civil rights and liberties, and climate justice, among others.

“The agenda is specifically focused on legislative and policy actions that are achievable by 2020,” Women’s March Chief Operating Officer Rachel Carmona said earlier.

Jessica González-Rojas, executive director at the National Latina Institute for Reproductive Health, described the agenda as a policy tool that organizers in different cities can use to take on issues that matter to their communities.

What makes it unique is how it takes typically gender-neutral issues such as immigration and offers policy solutions that specifically benefit women and families, she said.

“It’s about looking at different identities among women and femmes and the policy solutions to address attacks on those identities,” she said.

At the Washington march Saturday, Perez pivoted toward the “Women’s Agenda” after addressing the bigotry allegations.

She congratulated listeners for helping to “elect hundreds of women” and told members of the crowd to keep their eyes on 2020.

“Women’s Agenda will give clear marching orders to every grassroots activist in this nation and establish a solid platform on which truly progressive candidates can run and win in 2020,” she said.

Ocasio-Cortez: Picking up ‘where the civil rights movement left off’

In New York, demonstrators gathered for at least two separate events, including one at Foley Square for a “Women’s Unit Rally.” Organizers there said they aim “to demand equal justice for black women, immigrant women, women of color, and gender nonconforming people.”

US Rep. Alexandria Ocasio-Cortez, the New York freshman whose following among progressives has made her one of the most high-profile House Democrats, attended both that event and a march near Central Park.

At Foley Square, the 29-year-old lawmaker said marchers are picking up “where the civil rights movement left off.”

Discussions of racial and social justice are being extended to economic and environmental justice, Ocasio-Cortez said.

“Last year we took the power to the polls, and this year we’re taking power to the policy, because we have taken back the House of Representatives– and that’s just step one.

“We’re going to keep pushing, because in 2018 we took the House of Representatives, and through 2020, we’re going to take the White House and the Senate, too.”

Concerns about diversity, inclusion and allegations of bigotry

The marches come as concerns about diversity and inclusion have rattled groups across the country. Allegations of bigotry against leaders of Women’s March Inc., the national group formed by organizers of the 2017 march, threaten to overshadow the work of grassroots activists.

One of the national group’s leaders, co-chair Tamika Mallory, has been criticized in particular for her association with the Nation of Islam leader Louis Farrakhan. Farrakhan, who has led the black nationalist group since 1977, is known for hyperbolic hate speech aimed at the Jewish community, and made remarks such as “the powerful Jews are my enemy” in February.

Then, an article last month in the Jewish online magazine Tablet, citing unnamed sources, accused Mallory and Perez of making anti-Semitic comments to a Jewish woman who invited them to organize the march.

The group has released numerous statements condemning anti-Semitism and vowing to learn from its missteps through training and discussions — pledges that people associated with the group say are underway.

In Washington, marcher Carmella Ormando told CNN the controversy gave her no reservations about participating.

“Because nothing is perfect,” the Arlington, Virginia, resident said, when asked why. “Because they have worked to solve some of their problems and use it as an opportunity to make some changes.

“And because we need to support each other, because the cause is much bigger.”

She and Marian Klymkowsky, also of Arlington, said they marched in 2017. Klymkowsky said they were back because they’re dissatisfied with the President.

“He’s not uniting the country. He has pat solutions for problems of his own making,” she said. “Why wouldn’t you be out here marching?”

Jarfa Ashrafi said she wanted to have her voice be heard on topics she is passionate about.

“I thought a women’s march, it would be a great first march for me to attend,” she said.