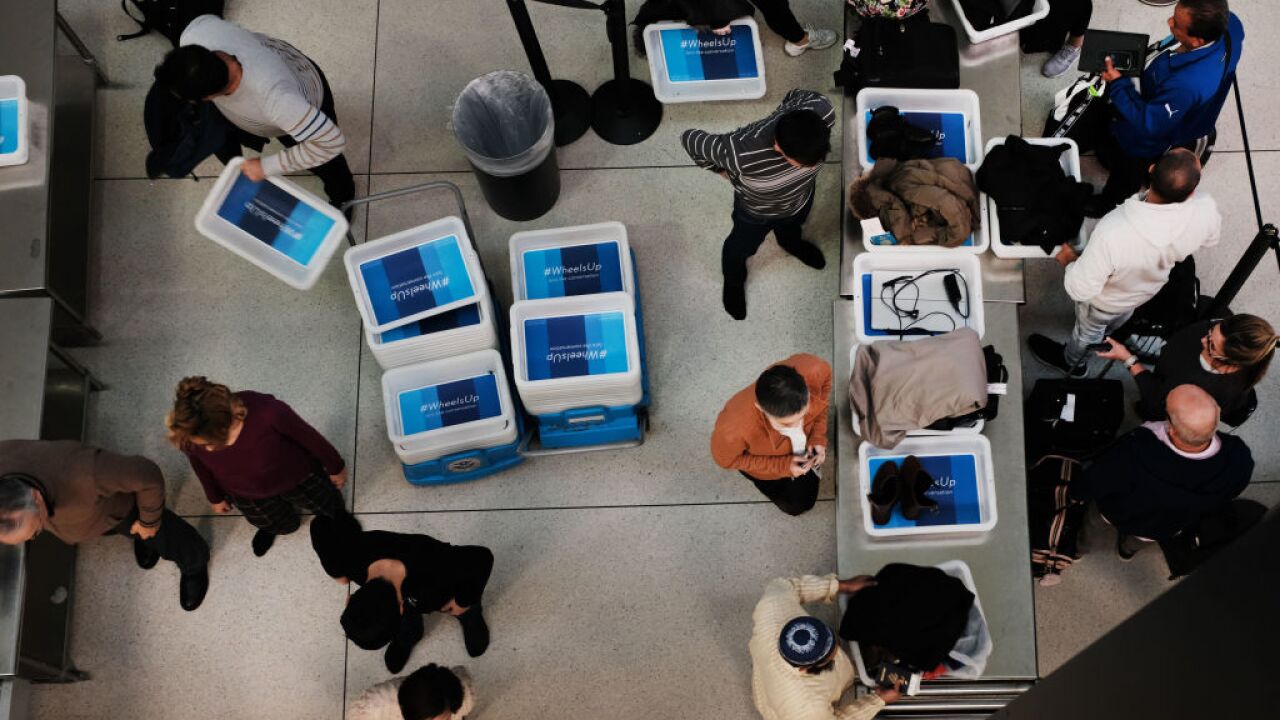 NEW YORK, NEW YORK – JANUARY 09: Passengers wait in a Transportation Security Administration line at JFK airport on January 09, 2019 in New York City. Its been reported that hundreds of TSA screeners and agents have called in sick from their shifts from a number of major airports as the partial government shutdown continues. Employees of the TSA, whose job it is to keep airlines safe, are being forced to work without knowing when their next paycheck is coming. (Photo by Spencer Platt/Getty Images)

Seeking to ease the pain of airport security agents working through the partial government shutdown, the Transportation Security Administration is compensating those on duty the day after the lapse in funding and awarding $500 bonuses for work during the holiday travel season.

TSA Administrator David Pekoske announced the compensation Friday on Twitter amid mounting concerns that the nation’s airports might not be able to provide the usual standard of security. Already, hundreds of TSA screeners from at least four major airports have called out from their shifts since the shutdown began three weeks ago.

Pekoske said all TSA employees who worked December 22 will receive pay for the day no later than Tuesday.

The $500 bonuses for uniformed screening officers who worked during the busy holiday travel season should arrive in the coming days, Pekoske tweeted.

The administrator said the pay was possible due to “unique authorities provided TSA in law.”

“While I realize this is not what you are owed for your hard work … and what you deserve, I hope these actions alleviate some of the financial hardship many of you are facing,” the TSA chief wrote.

On Saturday, Miami International Airport decided to shut down a concourse early for three days due to a shortage of TSA screeners, airport spokesman Greg Chin said. Concourse G was to close after 1 p.m. Saturday, Sunday and Monday, he said.

About 51,000 TSA agents are among the 800,000 government employees working without pay or on furlough. This week, they missed their first full paychecks since the shutdown.

TSA officers screen about 800 million passengers a year. Considered essential employees, the agents are among the 420,000 federal workers expected to continue to work without compensation.

Pekoske held a call Monday with TSA security directors from airports across the country to discuss the impact of the shutdown, including a growing number of agents refusing to work without pay.

The longest shutdown in US history started after President Donald Trump refused to back off a demand for $5.7 billion for his long-promised border wall. The figure remains a nonstarter for Democrats, leaving Congress at an impasse that triggered the partial shutdown — which has affected key parts of the federal government, including the departments of Homeland Security, Justice, Interior, State and Housing and Urban Development.