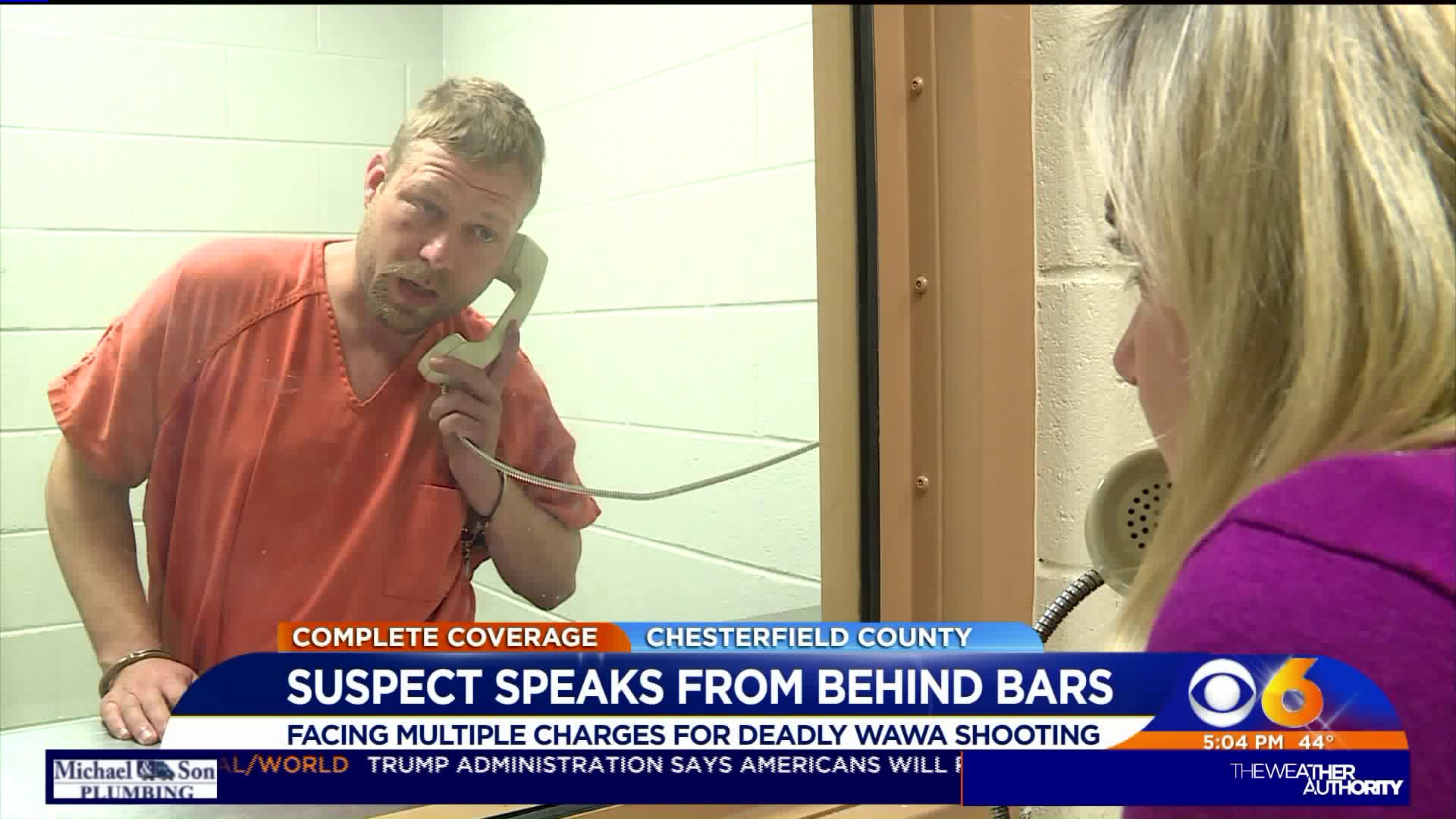 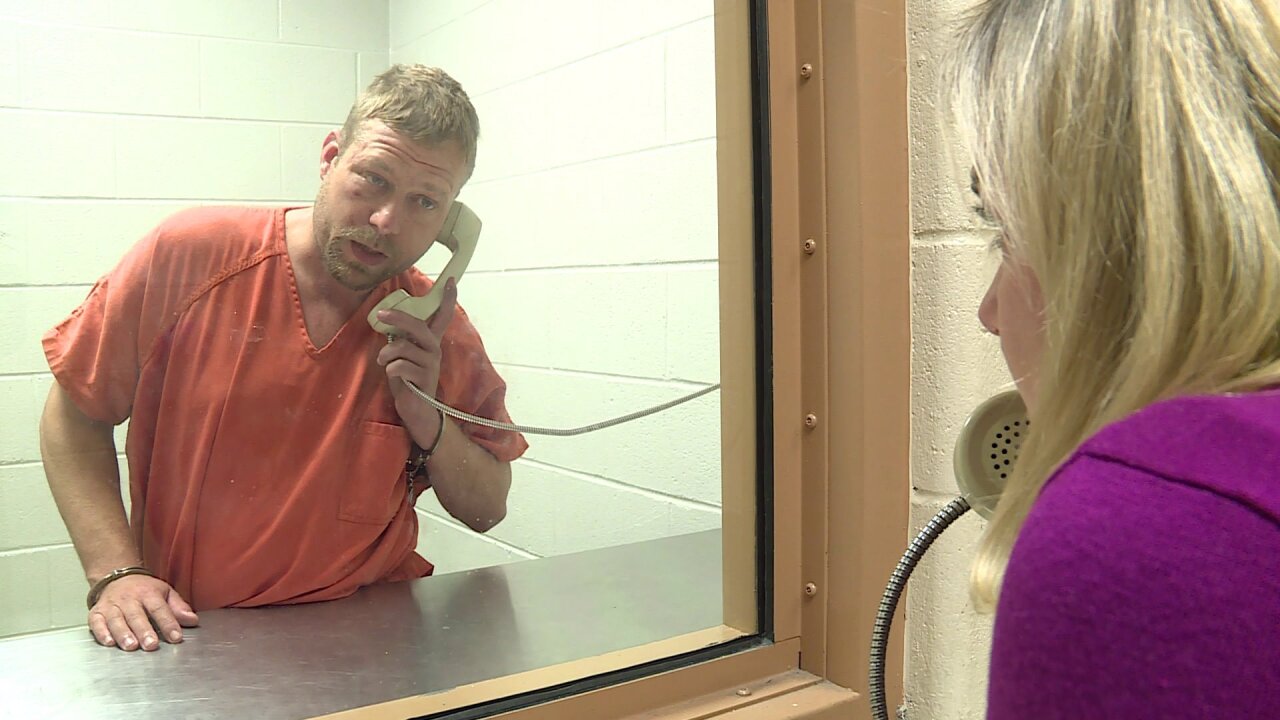 CHESTERFIELD COUNTY, Va. -- The man charged with fatally shooting a father of three at a Wawa gas station in Chesterfield County Tuesday night said from behind bars Wednesday that he felt "bad for the situation."

George Thomas Buschmann, 34, talked to reporter Melissa Hipolit from inside the Chesterfield County Jail about what he believed happened when he stopped at the Wawa to get gas as he looked for a place to sleep.

Court records show Buschmann, who graduated from Manchester High School, has lived at various addresses in Chesterfield and other parts of Central Virginia, but police said he currently has no permanent address. Buschmann's sister Ruth said that her brother had recently been living with her in Charlottesville, and that he has schizophrenia and it was not being treated.

While she has no idea what led to the events of Tuesday night, she did say he has a lot of paranoid thoughts.

Buschmann admitted to firing his gun outside the Wawa Tuesday night, but claimed he feared for his life.

“I feel bad for the situation, but I was trying to protect myself,” Buschmann said.

While he described in detail the reasons why he felt threatened in the parking lot, Chesterfield Police said their investigation indicated there was no communication between Buschmann and the victim -- Rob Gooch -- nor Gooch's teenage daughter.

As for the car he was driving, Buschmann said somebody gave it to him. Police, however, said that vehicle was stolen.

Buschmann was charged with first-degree murder, use of a firearm in the commission of a felony, grand larceny of a motor vehicle, felony eluding, possession of a firearm after being involuntarily committed and transporting a firearm while being subject to a protective order.

Police identified the man shot and killed Tuesday night in front of his daughter at the gas station on Otterdale Station Way as 34-year-old Robert S. Gooch IV of Chesterfield. Gooch, a father of three, was an Army Officer who survived several deployments to Afghanistan, Crime Insider sources told Jon Burkett.

"With the assistance of the public, the suspect was identified. After a brief vehicle pursuit on January 9, he was taken into custody without incident," a Chesterfield Police spokesperson said.

Henrico, Richmond, Chesterfield, and Virginia State Police were all involved in the pursuit, according to Crime Insider sources, which started when an officer attempted to pull Buschmann over for speeding in Powhatan County. Buschmann did not stop and led police on a chase that ended at the Hanover/Henrico line at Interstate 295 and Route 301.

Buschmann was involved in a justifiable homicide in 2012, sources told tell CBS 6 News. Those sources said on December 19, 2012, Richmond Police responded to the 2400 block of Brady Street for a report of a person down.

Upon arrival, officers found a male victim dead from a gunshot wound.

Witnesses told officers that it happened during an armed robbery attempt and that the dead man had actually tried to rob another man, but the victim pulled out his own gun and shot him, the sources said.

Buschmann voluntarily surrendered his weapon. An investigation determined that Buschmann had acted in self-defense.

Police were called to the Wawa gas station, along the 16000 block of Otterdale Station Way, at about 7:13 p.m. Tuesday for the shooting.

Gooch, according to Crime Insider sources, was standing outside a Wawa entrance door when he was shot.

He carried himself inside the store where frightened employees and customers tried to help him.

"All of a sudden we heard a lot of noise and then the window shattered. We heard gunshots," witness Tracea Bolin said. "It's the scariest thing ever. I just thank God I'm alive. That's the main thing, I'm just so thankful because it's a scary feeling knowing a gunman might be running around."

Bolin also said this all unfolded in front of Gooch's daughter.

"He has a little daughter there with him and she was there praying for her dad, hoping he made it," said Bolin. "And he was there laying on the ground."

So far the investigation indicated Buschmann and Gooch did not know each other, a Chesterfield Police spokesperson said.

Police continue to investigate this incident and urge anyone with information to contact the Chesterfield County Police Department at 804-748-1251 or Crime Solvers at 804-748-0660 or through the P3 app.