Trump: ‘May declare a national emergency’ to build wall 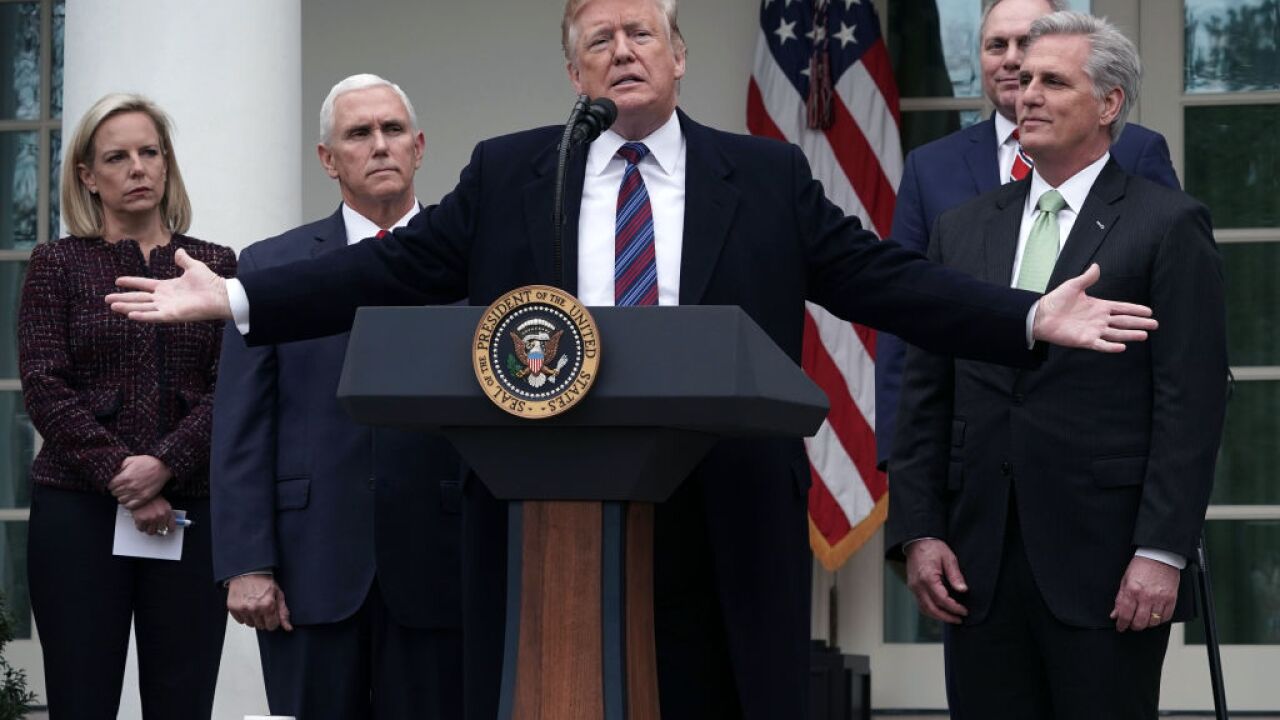 President Donald Trump said Sunday that he might declare a national emergency imminently to secure money for his border wall.

“I may declare a national emergency dependent on what’s going to happen over the next few days,” Trump told reporters as he left the White House for Camp David.

A White House official told CNN on Saturday that Trump was leaning towards declaring a national emergency to use military funding for his wall. Trump has demanded Congress appropriate money for the wall, and his dispute with Democrats over the issue pushed the government into an ongoing partial shutdown.

Vice President Mike Pence held a meeting with congressional leadership staff on Sunday afternoon, but after the meeting’s conclusion, there was little indication they were getting close to a deal to reopen the government.

Two congressional sources told CNN ahead of the meeting that aides were expecting to be given the White House’s budget justification for about $5.7 billion for the border wall. A Republican aide told CNN after the conclusion of that meeting that Democrats had been given “a detailed, breakdown list of the administration’s proposals for border security that include the wall and other border protection measures.”

The aide said Democrats did not come back with a “reasonable” counteroffer to the administration’s requests.

A source in the meeting said the weekend talks were good only in the sense that they got a more precise sense of what the administration wanted. The source said Democrats reiterated that an agreement would take too long and that they should enact some appropriations bills this week, adding that there was no real discussion about a dollar amount they could agree to.

A Democratic aide said Sunday’s meeting started about 45 minutes late, and despite the delay they still did not receive a full budget justification. The source said Democratic staff repeatedly urged the administration and Republicans to reopen the government, but their requests were rejected.

Trump, however, tweeted late Sunday afternoon that the meeting was productive.

“V.P. Mike Pence and group had a productive meeting with the Schumer/Pelosi representatives today,” Trump wrote. “Many details of Border Security were discussed. We are now planning a Steel Barrier rather than concrete. It is both stronger & less obtrusive. Good solution, and made in the U.S.A.”

Trump told reporters on Sunday morning that he was considering declaring a national emergency, and he said he planned to call the head of US Steel and other steel manufacturers to ask them to design a steel barrier for the southern border.

Trump spoke to reporters again on Sunday afternoon and offered few details, but he reiterated he was “looking at a national emergency,” adding, “We’ll be letting you know fairly soon.”

Trump said that he would consider a deal that involved protections for Deferred Action for Childhood Arrivals program recipients, but indicated that he preferred to wait until the Supreme Court ruled on the issue.

“I would rather have the Supreme Court rule and then work with the Democrats on DACA,” Trump said.

Trump said on Friday he “may” attempt to invoke emergency powers to build the wall, although such a move would be expected to face legal action.

The idea has met pushback from some, including California Democratic Rep. Adam Schiff, who said Sunday on CNN’s “State of the Union” that he did not think Trump would be able to use emergency powers to build a wall at the southern border.

“Look, if Harry Truman couldn’t nationalize the steel industry during wartime, this President doesn’t have the power to declare an emergency and build a multibillion dollar wall on the border,” Schiff said. “So that’s a non-starter.”

Schiff said the burden remained on Trump to move and reopen the government, saying Trump had painted himself into a corner and needed to “figure out how he unpaints himself from that corner.”

The congressman also said that if Democrats give into Trump’s demand, it would incentivize the President to attempt further shutdowns in order to extract concessions.

“We just can’t afford to do business that way,” Schiff said.

Acting White House chief of staff Mick Mulvaney said in a separate interview on the same program that talks on Saturday to reopen the government “did not make much progress.”

Trump, in his comments to reporters Sunday morning, said he and Pence did not “expect to have anything happen” at further shutdown talks between Pence and congressional leadership staff Sunday afternoon.

Trump said, however, that he expected “very serious talks” early this week and that he “can relate” to federal workers affected by the shutdown.

“I am sure that the people that are on the receiving end will make adjustment, they always do,” Trump said.