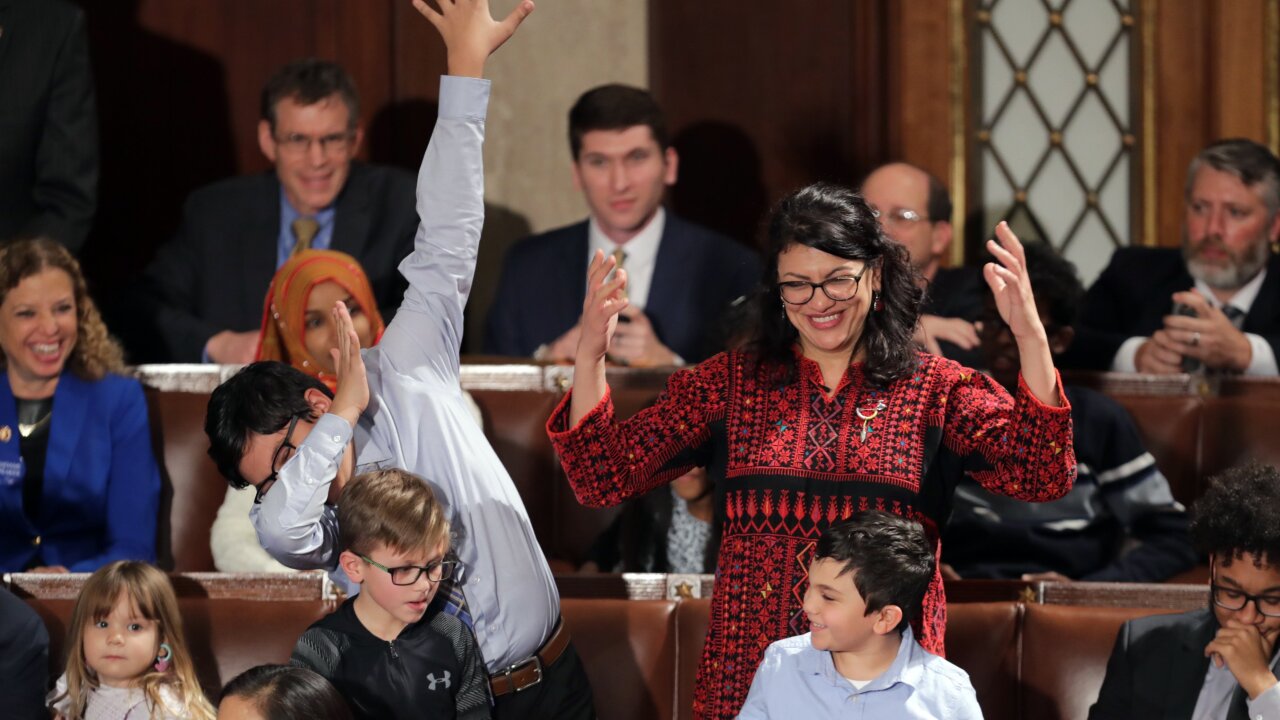 Hours after she was sworn in to Congress, Michigan Democratic Rep. Rashida Tlaib used an expletive Thursday in pushing for impeaching President Donald Trump.

Hours after she was sworn in to Congress, Michigan Democratic Rep. Rashida Tlaib used an expletive Thursday in pushing for impeaching President Donald Trump.

Speaking to a crowd at an event sponsored by the progressive group MoveOn, Tlaib recalled the moment she won her election in November.

“And when your son looks at you and says, ‘Mama look, you won. Bullies don’t win,’ and I said, ‘Baby, they don’t,’ because we’re gonna go in there and we’re going to impeach the motherf****r,” Tlaib said Thursday, speaking of Trump, according to a video posted on Twitter by Nestor Ruiz, an activist with United We Dream.

Tlaib did not seem remorseful about her choice of words on Friday.

“I will always speak truth to power. #unapologeticallyMe,” she wrote on Twitter.

Her office also released a statement Friday, saying, “The Congresswoman absolutely believes he needs to be impeached.”

“She ran and won by making this very clear to the voters in her district,” the statement said. “Donald Trump’s actions have harmed the 13th Congressional District and this country, and Congresswoman Tlaib will not stay silent while this happens.”

Tlaib also penned an op-ed Thursday arguing that “the time for impeachment proceedings is now.”

“President Donald Trump is a direct and serious threat to our country,” she wrote in the op-ed published in the Detroit Free Press with John Bonifaz, co-founder of the nonprofit Free Speech For People. “On an almost daily basis, he attacks our Constitution, our democracy, the rule of law and the people who are in this country. His conduct has created a constitutional crisis that we must confront now.”

During her campaign, Tlaib made clear that once in Congress she was going to push for impeachment against Trump.

“Why am I running? Because this is about electing the jury to impeach (POTUS) and I will make a heck of juror,” she wrote on Twitter in March.

More than a year before she ran for Congress, Tlaib made headlines for being thrown out of an event in Michigan where Trump was speaking. She had interrupted the then-Republican presidential nominee to ask if he had ever read the Constitution.

Tlaib is one of few Democratic lawmakers to call for Trump’s removal from office, however House Speaker Nancy Pelosi and other House Democratic leaders have tread more carefully around the topic of impeachment.

In an interview with NBC News this week, Pelosi didn’t rule out pursuing impeachment against Trump, but said Democrats would wait until special counsel Robert Mueller’s investigation concludes.

On Friday morning, Trump reacted to the talk of impeachment by questioning why House Democrats would do such a thing. He also blamed a volatile stock market on Democrats taking control of the lower chamber.

“As I have stated many times, if the Democrats take over the House or Senate, there will be disruption to the Financial Markets. We won the Senate, they won the House. Things will settle down. They only want to impeach me because they know they can’t win in 2020, too much success!” Trump said on Twitter.

He added, “How do you impeach a president who has won perhaps the greatest election of all time, done nothing wrong (no Collusion with Russia, it was the Dems that Colluded), had the most successful first two years of any president, and is the most popular Republican in party history 93%?”

Friday afternoon, Trump called Tlaib’s comments “disgraceful” when he was asked to respond to them.

Trump said Pelosi told him Friday, “‘We’re not looking to impeach you.'”

A spokesman for Pelosi told CNN that Trump did bring up impeachment during a meeting between with congressional leaders about the partial government shutdown.

“Speaker Pelosi made clear that today’s meeting was about re-opening government, not impeachment,” Drew Hammill said in a statement.