Teacher, Henrico native unable to return home after being struck with paralysis in Thailand 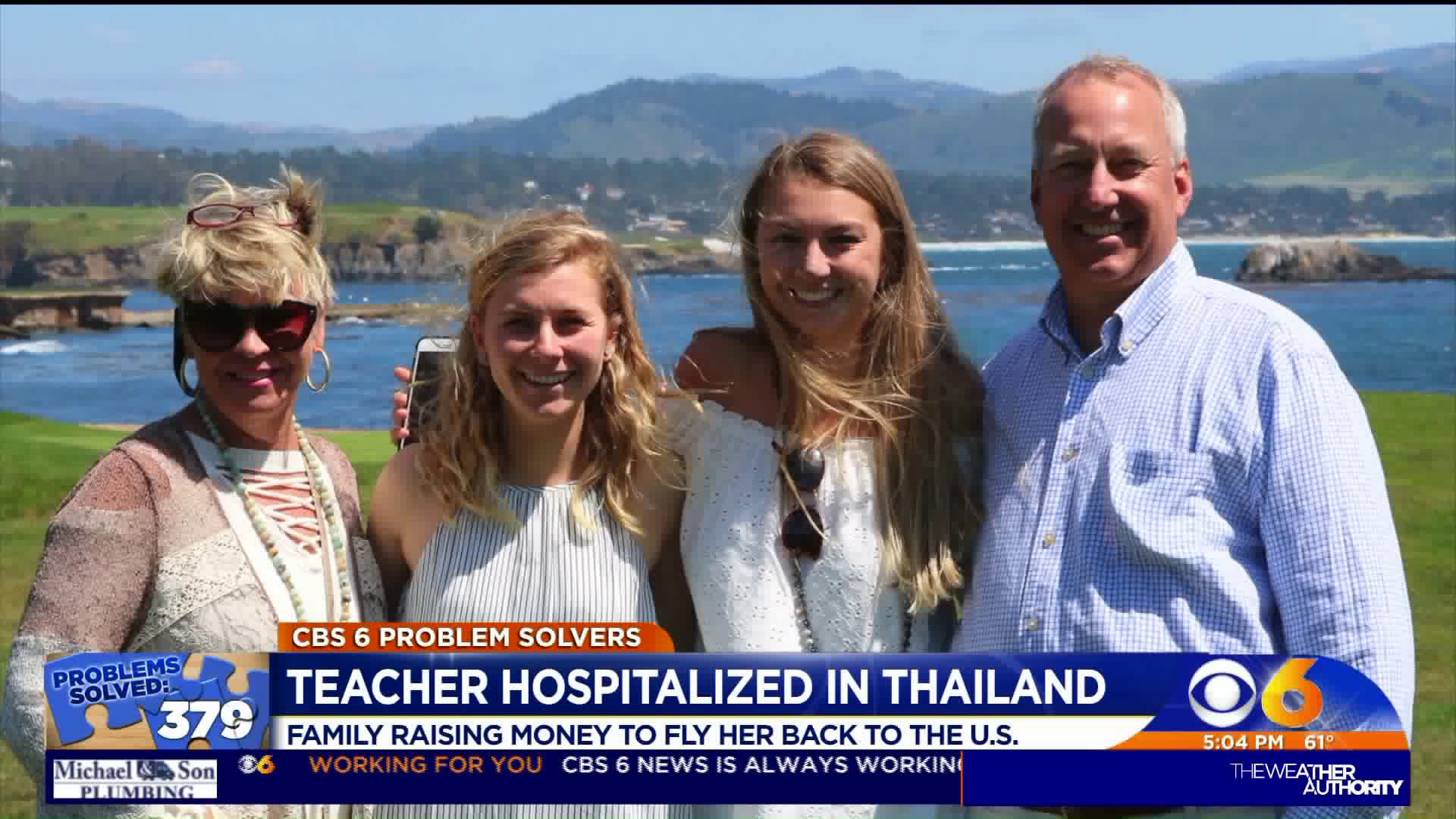 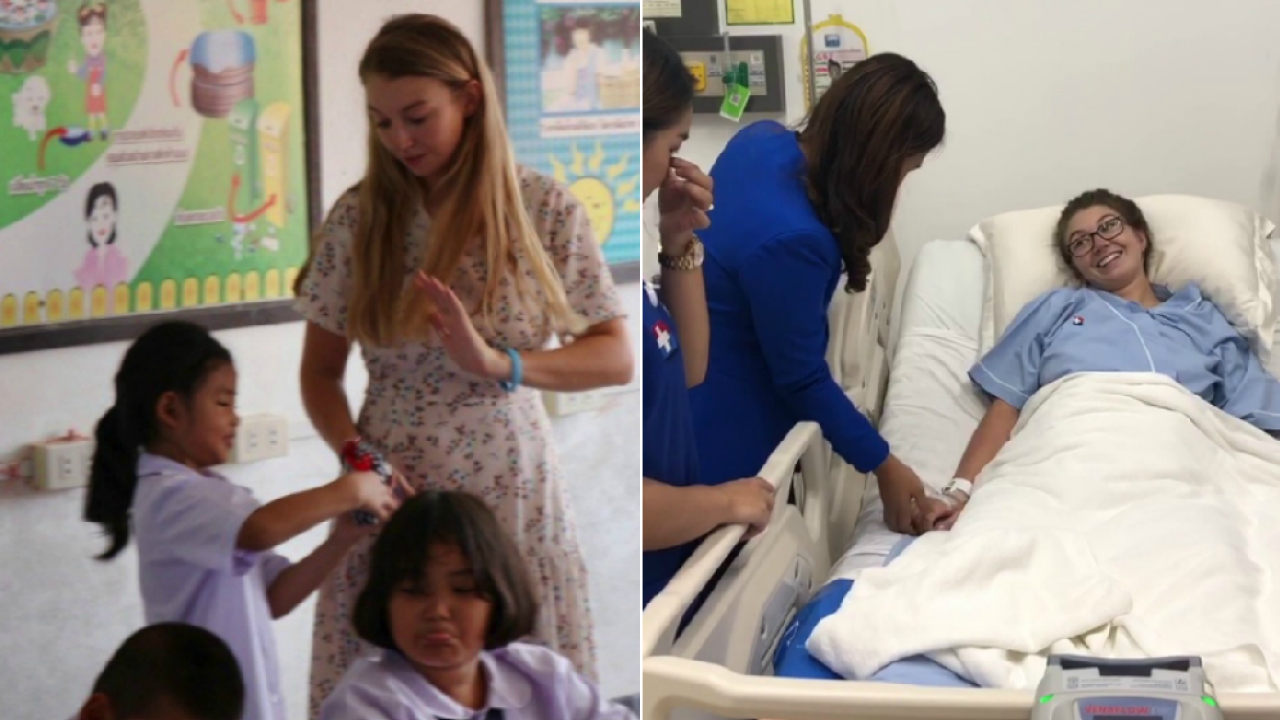 RICHMOND, Va. -- A family in Henrico is working feverishly to try and get their loved one back home to the United States after a sudden illness left her paralyzed.

They asked the CBS 6 Problem Solvers to share the story of 22-year-old Caroline Bradner. The Douglas Freeman High and University of Mississippi grad has been in Thailand for two months following her dream of teaching abroad.

Dad, Jim Bradner says his daughter graduated and then waited tables for a few months so she could save up money for her trip.

Caroline applied to teach through a program called Xplore Asia. She left in October and made her home in a tiny town about eight hours from Bangkok.

Bradner says the career move was no surprise to the family. “She has that tenacious spirit. That she wants to go out there and try something new.”

That tenacious spirit is what prompted Caroline to hop on a plane and follow her dreams nearly nine thousand miles away.

She has spent the past two months teaching English to children there. “It was it inspiring to me that she wanted to do this. But, it was scary too because she’s exactly on the other side of the globe” dad said.

He says Caroline fell in love with the children and the feeling was mutual. No one was prepared for a tragic twist in her new adventure.

Days before Christmas, Caroline woke up and was unable to move. Thankfully a friend in the program, who also happens to be from the Richmond area was there to get her to a hospital.

Bradner says he is extremely grateful to the young lady who stayed by Caroline’s side during this ordeal, until Caroline’s mother flew to Thailand to be with her.

He says his daughter was diagnosed with an autoimmune disease called Guillain-Barre Syndrome. It has temporarily paralyzed her from the neck down.

In the past few days, however, Bradner says his daughter has been able to move her shoulders and has felt some tingling in her fingers.

Her spirits are good too, he said. That brings loved ones some comfort, but they are still desperate to get Caroline home. Her sister Pierce who lives in California had literally just landed and was on her way to her parents’ University Heights home in the west end of Henrico when she found out the news about Caroline.

She can’t stop worrying about her younger sister. “She’s scared because she can’t move. But, she is really strong and really brave. She’s a great person, the best sister,” Pierce added.

Neighbor Lori Horton is a close friend of the Bradner family. She’s also a nurse. When she found out about Caroline’s situation, she jumped in to help. Horton spoke with the family about the disease, telling them that the paralysis does reverse itself.

She and the family just don’t have an idea of how long that could take. Her recovery could take months, even years.

“The key to healing has a psychological component that you can’t replace by being so far away. This is very stressful for mom and Caroline to be so far away,” Horton added.

To complicate matters, dad says their insurance company denied a request to transport Caroline back to the United States.

She’s unable to just get on a regular commercial flight because of her fragile physical condition. The family says she would need to be flown back with her mom and a nurse to look after her.

Pierce created a Go Fund Me page called “Help Bring My Sister with Paralysis Back to U.S.” In one day it has already raised more than forty-seven thousand dollars.

Family, friends, and strangers have contributed to raise the funds needed for the return trip home and the long road to recovery.

“The hospital there has put out bids to get us costs and we should know something in the next two to three days,” Bradner added.

He says a doctor must clear Caroline to make the twenty-six-hour flight home from Thailand. They must also raise the money to cover the trip for Caroline, his wife, and a nurse.

Mr. Bradner says he is especially grateful that Caroline had a friend with her at the time she fell ill.

He wants to give a special thanks to that friend, Tess, also a teacher. She became fast friends with Caroline a few months ago when the two met through the Xplore Asia program.

The family says Caroline is just seventeen days away from her twenty-third birthday. They would love nothing more than to have her back in the United States, and close to home getting the extensive treatment necessary to get her on the road to recovery.

“People have been generous and I’m thankful. I want continued prayers and thoughts. We do want financial donations because we need to get Caroline home. She needs to get well,” Horton added.

“We just appreciate everybody’s help and outpouring. All the support and prayers. Caroline has a lot of family and friends in her corner. They are pulling for her and want to get her home ASAP, so she can get the care she needs,” Bradner said.