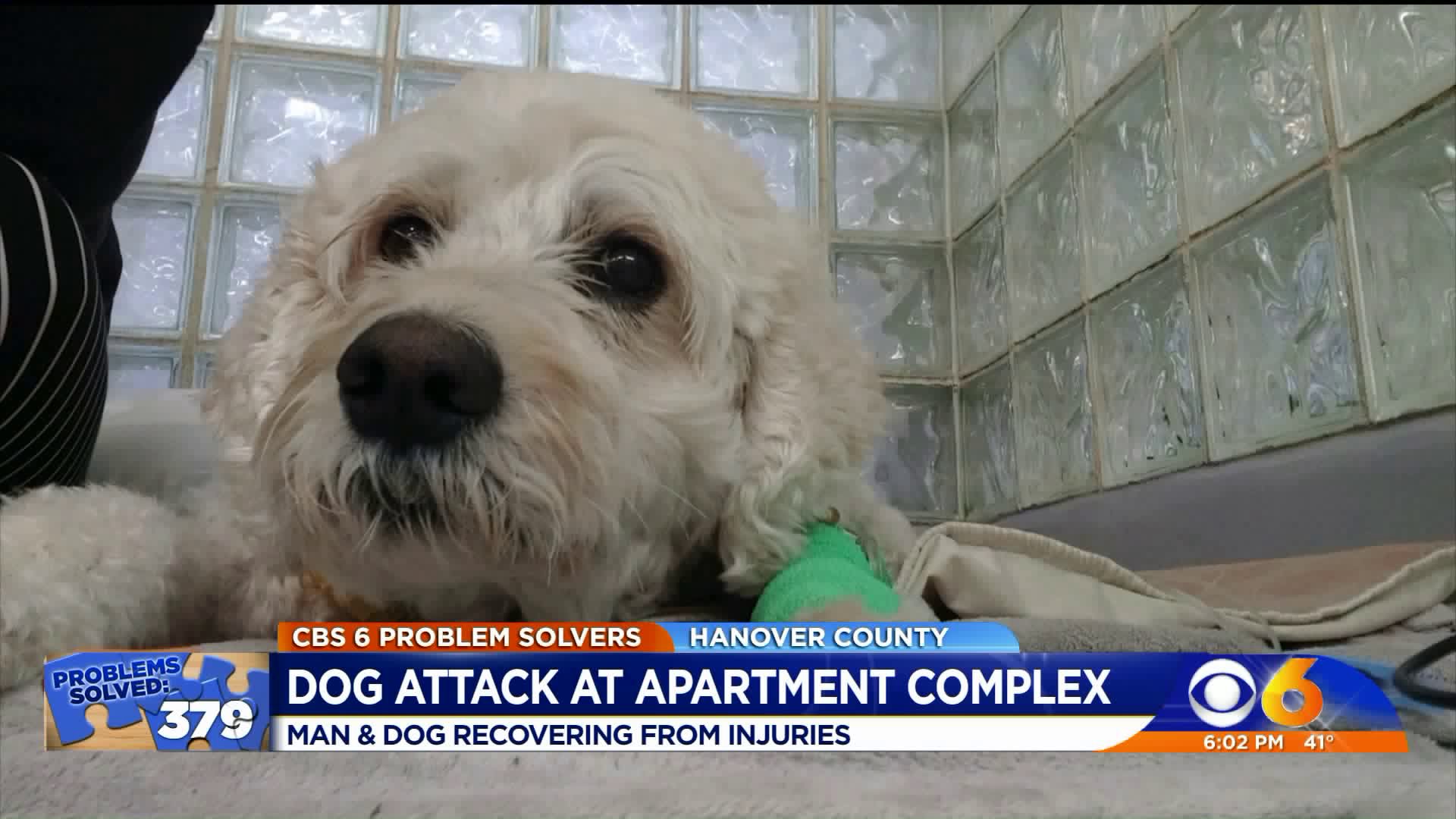 MECHANICSVILLE COUNTY, Va. -- A Mechanicsville man and his dog are recovering after being attacked outside the apartment complex they were living in earlier this month.

It happened while on a walk December 3, at the Hanover Crossing Apartments.

“This dog, pit bull just saw us,” said Brett Massimino. “For some reason didn’t like us gave off a couple barks that were very aggressive and pushed its way through the screen door.”

“The dog just went straight after mine. My dog was on his back just basically being mauled at that point,” said Massimino. “I had to fend off the dog to get him off of mine so that was a fairly violent process.”

The dog, that animal control identified as a pit bull then turned on his owner.

All of them ended up in emergency rooms.

“A lot of muscle damage soft tissue, worried about internal organs so they had to open him all up,” said Massimino. “The wounds were so large that some of the sutures weren’t taking.”

Massimino, who was recovering from back surgery at the time of the attack, suffered lacerations to his finger and loss of feeling.

The family is out thousands of dollars in vet bills alone.

The Massiminos reached out to the CBS 6 Problem Solvers when they say the pit bull’s owners did not respond to their communications.

CBS 6 did successfully reach the family who provided us with the following statement,

“We did respond to The (sic) Massimino family. I believe it may have been a miscommunication issue of some sort. We have The family in our prayers and have thought about their dog everyday. It was an accident that could happen to anyone and it's an eye opener for us. We had to make a tough but responsible decision to have our family dog of 10 years euthanized. The incident that occurred was very unfortunate and devastating to us all. We do accept responsibility and have all intentions in helping this family with this financial burden. We give our deepest sincere apologizes (sic). I have reached out to the family agian (sic) today and I hope that we can resolve this issue peacefully. Thank you for reaching out to us for comment.”

The Massimino learned that the pit bull owners’ renter’s insurance plan, which is mandatory under the complex’s lease agreement, had lapsed.

“The ultimate outcome is raising awareness of the issue,” said Massimino. “Making sure people have the right coverage when they own a pet, make sure property management groups enforce their lease agreements.”

The Massiminos were informed by the property management firm Drucker + Falk that that this was a civil matter between the Massiminos and the owners of the pit bull. The firm said they are not liable.

“We contacted several people and it all fell on deaf ears we waited two weeks and basically said they aren’t liable for any of these damages,” said Massimino.

CBS 6 reached out to Drucker + Falk for comment and have not yet received a response.

George is expected to get his sutures out in a week. The family is hoping he will not have to undergo a third surgery.

“There’s no winners in this whole thing,” said Massimino.