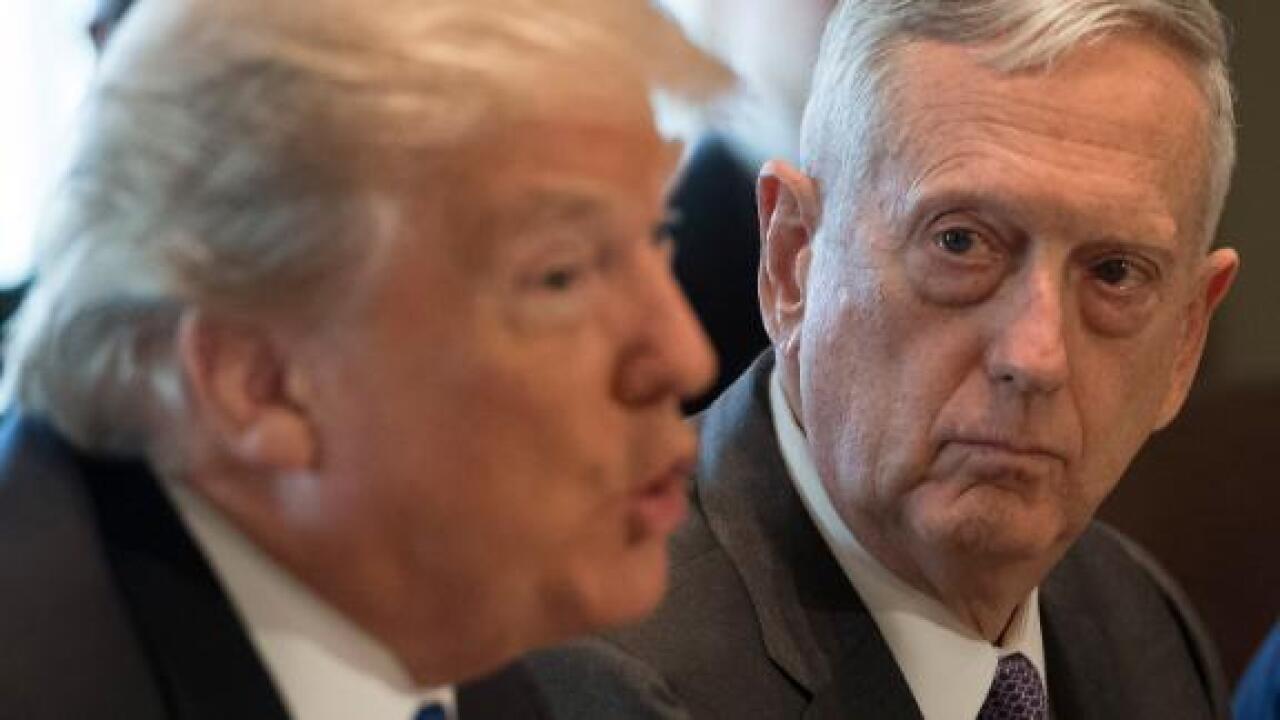 “I am pleased to announce that our very talented Deputy Secretary of Defense, Patrick Shanahan, will assume the title of Acting Secretary of Defense starting January 1, 2019. Patrick has a long list of accomplishments while serving as Deputy, & previously Boeing. He will be great!” Trump tweeted.

Mattis announced his resignation on Thursday with a letter saying his views were not aligned with Trump, who said Mattis would retire at the end of February.

Mattis’ last day is expected to be Jan. 1, according to a source familiar with the matter. He is not expected to have a big, public farewell ceremony to try to prevent further exacerbating tensions between himself and Trump, the source said.

In his resignation letter, Mattis cited posture hearings on Capitol Hill where he would have faced questions on Trump’s decision to pull out of Syria and Afghanistan and a NATO ministerial conference as reasons for his staying on until the end of February.

A senior administration official briefed a handful of reporters on the decision, which Secretary of State Mike Pompeo notified Mattis about Sunday morning.

The official said the idea is to help ensure a smooth transition to the new secretary, whose nomination is expected “shortly.”

“It is just untenable to have someone stretch out over a long period of time when everyone knows they are a lame duck,” the official said, adding that in order to ensure the smoothest transition with Congress, administration and allies, “there shouldn’t be any ambiguity that the person in charge is following the president’s policies. ”

The official said that Shanahan had been essentially “running the building” while Mattis worked on policy and outreach to military and allies.

A source familiar with the matter said Trump was mad at the extensive coverage given to Mattis’ resignation and therefore was forcing him to leave earlier than he originally planned.

Pentagon spokesman Col. Rob Manning said in a statement that “the secretary of defense serves at the pleasure of the President. The department remains focused on national security.”

The Pentagon updated its statement later Sunday, with chief Pentagon spokeswoman Dana White tweeting, “The Secretary of Defense serves at the pleasure of the President. #SecDef Mattis will work with Deputy Shanahan and department leadership to ensure the #DOD remains focused on the defense of the nation during this transition.”

Mattis’ retirement announcement on Thursday led much of Washington, including key Republicans, to express alarm about the change in leadership at the Pentagon. The announcement itself followed Trump’s decision to call for a full withdrawal of troops from Syria and consideration of a drawdown in Afghanistan.

Trump did not immediately realize how critical Mattis’ resignation letter was until some time after the two men ended their Oval Office meeting last week.

Aides said the President was relatively relaxed in the aftermath and seemed fine with Mattis’ decision to depart. But after Trump announced Mattis’ retirement and the Pentagon released Mattis’ letter, Trump began watching the coverage and realized the former general was leaving in protest of him — and not quietly, either.

The stream of praise that followed from Democrats and Republicans alike irked Trump. He remarked that Mattis was only being portrayed as the smartest guy in the world because he was leaving the Trump administration.

A source close to the White House told CNN’s Jim Acosta on Friday that Trump was angry about Mattis’ resignation letter. The source said Trump “hates the letter,” but “hates the coverage more.”

The source compared the Mattis situation to that of former top White House economic adviser Gary Cohn, who reportedly sought to circumvent the President at times when Trump was seen as going overboard. But “(Mattis and Cohn) didn’t garner the votes” in the 2016 election, the source said, Trump did.

Mattis’ No. 2 to lead Pentagon

Shanahan, Trump’s choice to replace Mattis on an interim basis, was confirmed as Mattis’ No. 2 in the Pentagon last year by an overwhelming margin that came after a confirmation process that included a clash with the late Arizona GOP Sen. John McCain.

Shanahan’s portfolio at the Department of Defense has been narrow; he has almost exclusively handled budget issues, internal reform and the Space Force.

His official biography from the Defense Department notes Shanahan joined Boeing in 1986 and stayed with the major defense contractor for more than three decades. He received an undergraduate degree in mechanical engineering from the University of Washington and two higher degrees from the Massachusetts Institute of Technology, according to his biography.

South Carolina GOP Sen. Lindsey Graham, who has called for hearings on Afghanistan and Syria, praised both Mattis and Shanahan via Twitter after Trump’s announcement.

“I think I speak for millions of Americans in thanking Secretary Mattis for a lifetime of exceptional and dedicated service to our nation. I know he will continue to contribute to our national security for many years to come,” Graham tweeted.