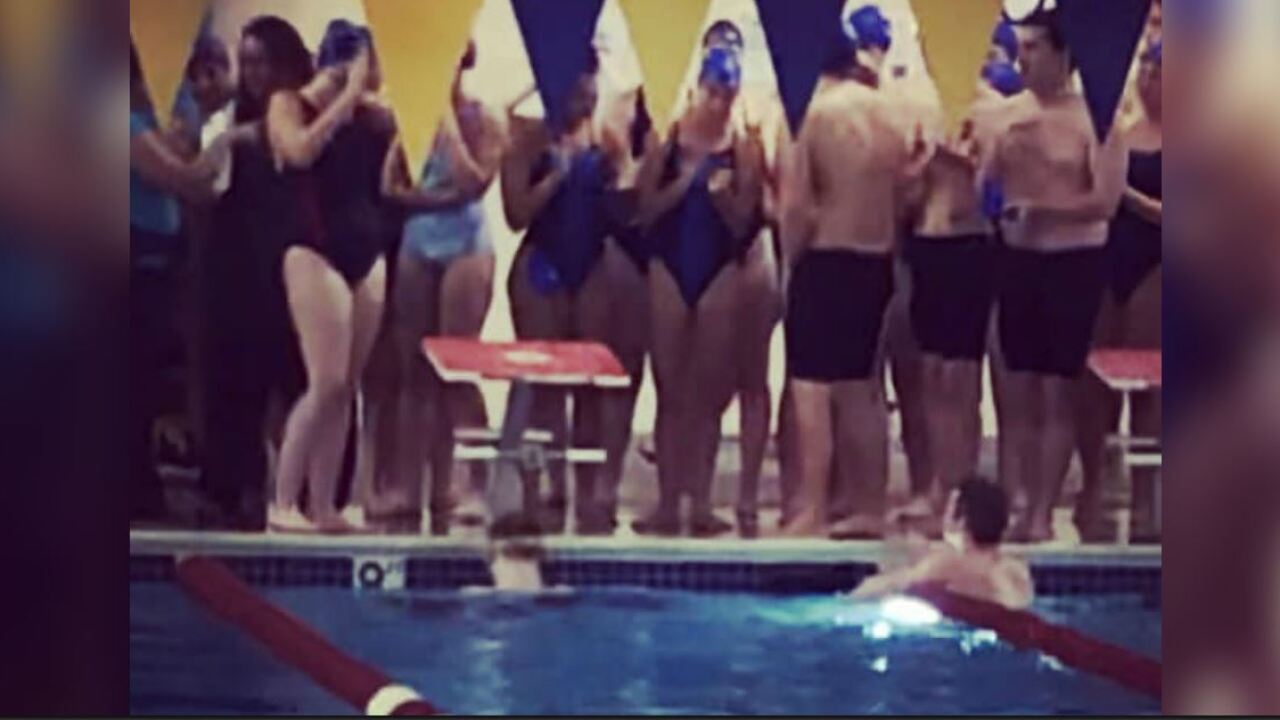 “I usually don’t post stuff about students/swimmers, but I felt that the hope that I found in the meet should be shared,” Wright said. “With so much negativity these days, it seemed like sharing a story with such positivity and optimism seemed like the right thing to do.”

The post detailed the events of Friday, December 7 at the King George YMCA.

“My swimmers and I had prepared ourselves to lose by a massive amount of points and we had talked about not focusing on the other team at all, just in our own growth and improvement,” she said. “What we weren’t prepared for was the unwavering support that we got from the King George swimmers. Instead of feeling awful about how behind we were, they made us feel like we were amazing. Instead of harping in how ahead they were, they made my swimmers feel like their effort and improvement were worth more than their own first place wins. In my 25 years of coaching, I have never seen anything like it.

“They had. Every right to gloat. But instead of gloating, they lifted us up and made us feel like equals.”

The Caroline HS swim team is a small team.  Eighty percent of my swimmers have never been on a swim team before.

A month ago they had never heard of “freestyle” or “butterfly,” and some of them didn’t even know how to swim.

By the time their swimmers finished their 100-meter swim, many of my swimmers were still on their first 50.

And you know what they did?

They moved from the end of their lanes to the ends of our lanes and screamed and yelled “let’s go! You got this! Almost there! You own this!.”

For MY swimmers. The other team.

I also have a swimmer with a disability.

He lacks the use of his legs and his hand movements are limited.

Yet he courageously begins each race and, without hesitation, swims whatever distance lies before him.

And you know what the KGHS swim team did?

They encouraged him. High fives and fist bumps before the race.

And boy did they scream and cheer for him.

The other swimmers who had finished their race waited for several minutes for him to finish.

Then they showered him with complements while the rest of their team erupted in claps and yells. For HIM. For the OTHER team.

They did this tirelessly, race after race. My team joined and started cheering for their swimmers.

At times it seemed like there was only one team in the pool.

My swimmers swam their races and I glowed as I watched them give their all to achieve their personal goals.

None of them ever gave up- no matter how behind they were or how out of breath they felt. And they had an entire pool deck, mostly comprised of the other coaches, swimmers, and parents, cheering them on.

I was proud and honored to be a coach tonight.

Whatever doubt I may have had about the civility and compassion that exists in this next generation is extinguished.

My team barely scored any points, but by the way they treated us and shook our hands, you would have thought it was a close match.

Thank you, King George High School, for reminding me that a team is only as good as the attitude of their swimmers. And by that standard, you all are the best around.