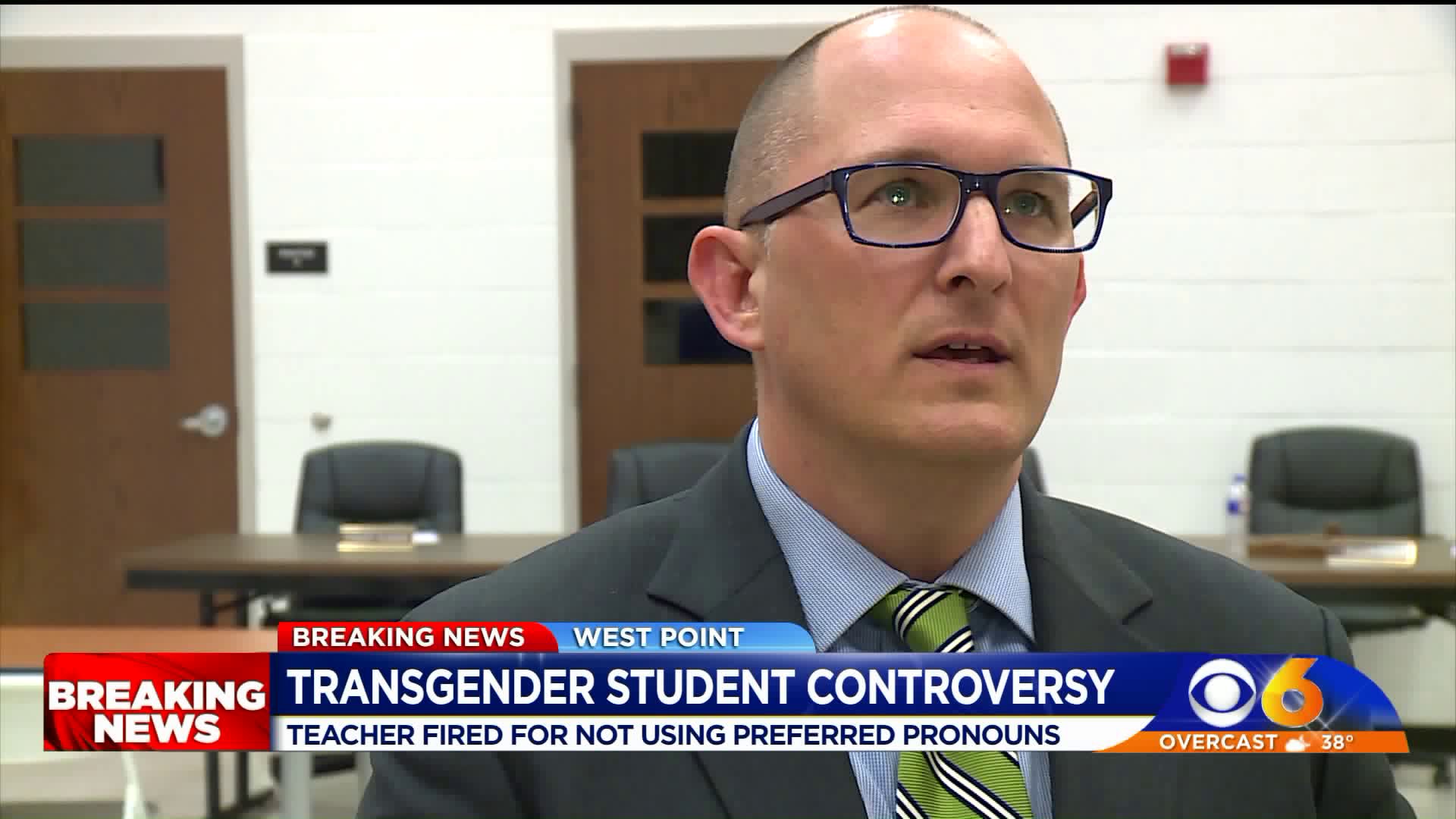 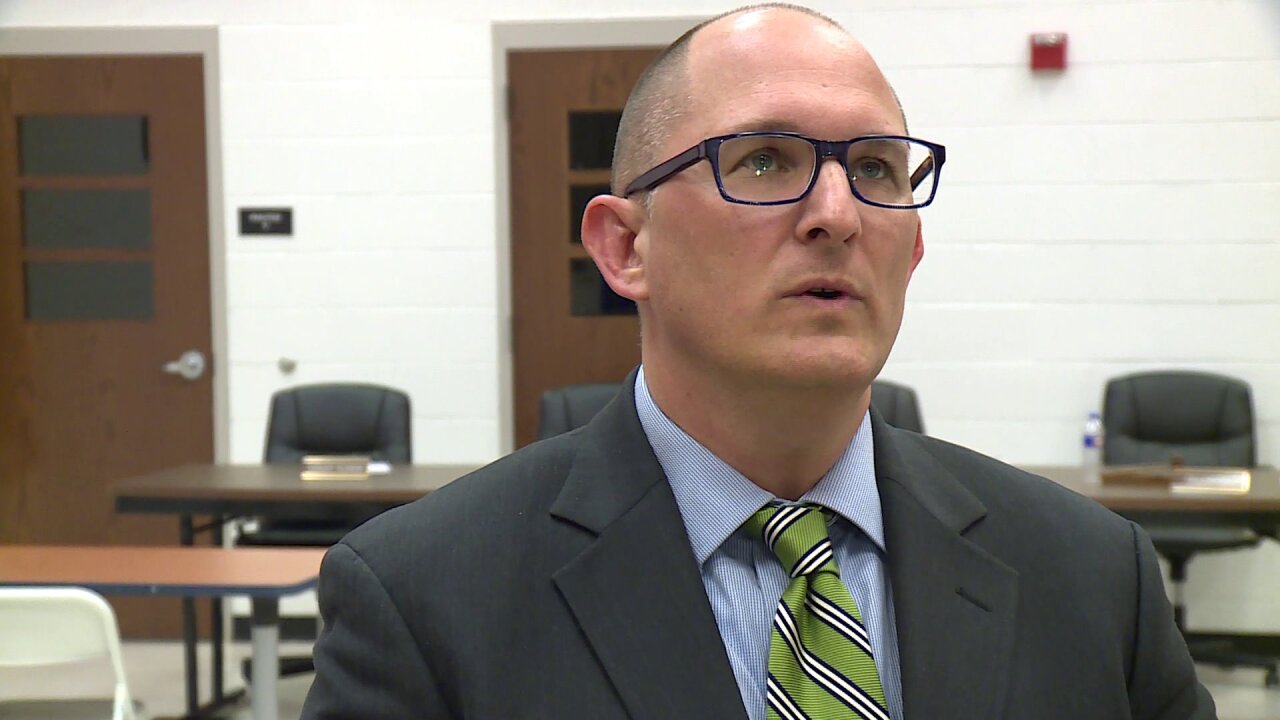 WEST POINT, Va. -- In a unanimous decision, the West Point Public School Board voted to terminate a teacher who refused to call a male transgender student by their preferred pronouns.

The original complaint stemmed from a rising-9th-grade student who had transitioned and requested to be called by the male pronouns "he" and "him."

Principal Jonathan Hochman told the School Board that Vlaming refused to use the male pronouns to refer to the student because he considered it a "lie."

"[He told me] I’ve had a slip-up and he went on to describe what happened," Hochman described. "He goes, 'the student was participating in an activity, almost walked into a wall and yelled out stop her.'"

Vlaming said he agreed to only refer to the student by his new name citing his devout Christian faith.

"We are here today because a specific worldview is being imposed on me," Vlaming read from a prepared statement. "Even higher than my family ranks my faith."

Superintendent Laura Abel told the School Board that administrators ordered Vlaming on numerous occasions to refer to the student by male pronouns. When the teacher refused, she recommended termination.

"By failing to follow the directive he was therefore discriminating and creating a hostile environment," Abel stated.

Vlaming's lawyer, Shawn Voyles, argued that his client cannot be forced to say something that violates his conscience.

The school system's attorney, Stacy Haney, said Vlaming had made a "conscious decision by a teacher to treat a student who is transgender different than other students. That's by definition discrimination."

The School Board voted 5-0 to terminate the teacher after an hour of closed session.

Vlaming was a bus driver, the school's first girls soccer coach and in the process of earning a Master's degree. He's a husband and the sole wage provider to his family including four young children, according to Voyles.

About a hundred students and parents were left outside of the hearing that had accommodations for 60 members of the public. At times, the hearing was contentious which had a court-like setting where witnesses were sworn-in.

When CBS 6's Brendan King asked Vlaming if his defiance of administrator's orders was worth it, he replied: "there are some hills that are worth dying on."

Superintendent Abel sent the following statement after the hearing:

The School Board has policies that prohibit discrimination on the basis of gender identity. As detailed during the course of the public hearing, Mr. Vlaming was recommended for termination due to his insubordination and repeated refusal to comply with directives made to him by multiple WPPS administrators. As superintendent, it is my responsibility to enforce board policy, and due to Mr. Vlaming's non-compliance I therefore recommended termination.

Given the potential for further litigation, we will limit any additional comments to what was presented at the hearing.

The school board later released the following statement:

Thursday night, the School Board made a difficult decision after thoughtful consideration. It is the Board’s responsibility to adopt and uphold policy, and we unanimously voted to affirm the superintendent’s recommendation to terminate Mr. Vlaming.

West Point Public Schools has the responsibility to ensure all students have a safe and supportive school environment where they can learn and thrive. We do not and cannot tolerate discrimination in any form, or actions that create a hostile environment for any member of our school family. Mr. Vlaming was asked repeatedly, over several weeks and by multiple administrators, to address a student by the pronouns with which this student identifies. The issue before us was not one mistaken slip of the tongue. Mr. Vlaming consistently refused to comply going forward -- including in a statement made at the hearing -- a willful violation of school board policy.

While we understand that some do not agree with our decision, we hope to have discussions that help West Point Public Schools move forward, maintain our focus on excellence and instruction, and make a positive impact on the lives of our community’s children.

-- The Town of West Point School Board

Vlaming's biography on the school website, which was taken down shortly after the vote, read: "Native of Chicago, I finished my bachelor's degree in French at La Sorbonne through the University of Illinois. I lived in France for a total of 11 years, where I worked, earned a theological degree, and met my wife, Nathalie. We live in Williamsburg with our 4 children."

Voyles stated they had 10 days to appeal the Board's decision to the Circuit Court and may seek a federal lawsuit.