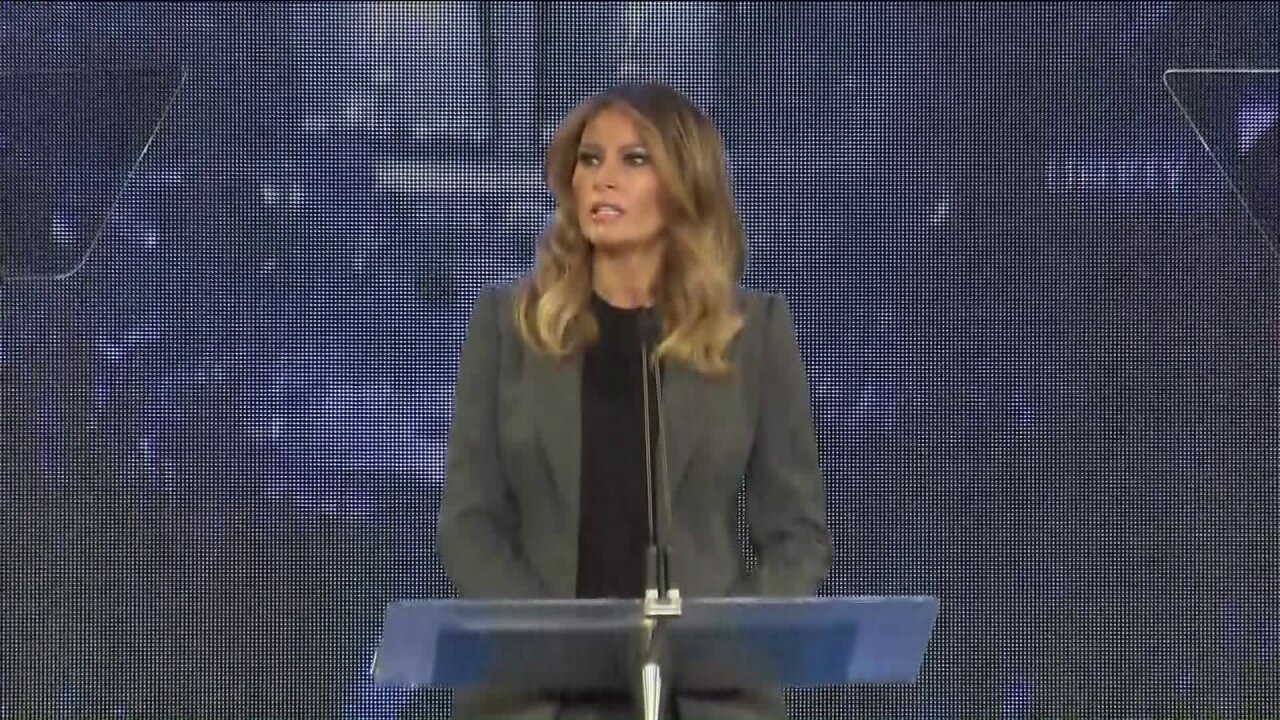 LYNCHBURG, Va. — Melania Trump on Wednesday continued her stated mission to discuss the ongoing opioid crisis with young people by participating in a town hall with college students at Liberty University, a faith-based college in Lynchburg, Virginia.

“When I took on opioid abuse as one of the pillars of my initiative ‘Be Best,’ I did it with the goal of helping children of all ages. I have visited several hospitals and facilities that are dedicated to helping all who have been affected by this disease — including people who are addicted, babies born addicted and families coping with addiction of a loved one,” she said Wednesday.

“What has struck me with each visit is how this epidemic has touched so many people — whether it is because of personal use, or that of family members, friends, coworkers or neighbors — opioid addiction is an illness that has truly taken hold of our country,” she said.

Trump then joined conservative television personality Eric Bolling for a panel discussion and took a few questions from the audience.

Trump emphasized the importance of being “respectful and kind” on social media, part of her platform as first lady, but added: “And also sometimes you need to fight back, I’m sorry,” hinting at support for her husband’s bullying tactics on Twitter.

She also spoke about making time with the President.

“In the evenings, we try to get together, have dinner,” she said, but, “when you’re first lady, you have no free time.”

Asked by Bolling if she ever has time to “make a casserole or something,” she laughed.

“Not really … we can do that maybe in the future when I’m a little less busy,” she said.

She also weighed in on those red berry Christmas trees unveiled at the White House earlier this week, which have sparked comparisons to blood.

“We are in 21st century and everybody has different taste. I think they look fantastic. I hope everybody will come over and visit it. In real life, they look even more beautiful and you are all very welcome to visit the White House, the People’s House,” she said.

Trump was invited to speak at the event by the wife of Liberty’s president Jerry Falwell, Jr., who told the school’s newspaper that Becki Falwell is close with Trump.

“My wife is good friends with the first lady so she texted her and invited her to come. She figured the worst that could happen is that she says ‘no.’ And she said ‘yes,’ so she fit it into her schedule,” Falwell told the Liberty Champion.

Trump was part of a panel of speakers, which includes Department of Homeland Security Secretary Kirstjen Nielsen and Secretary of Health and Human Services Alex Azar, both of whom flew with Trump on her government jet from Andrews Air Force Base in Maryland to attend the event. Eric Bolling, the former Fox News personality whose son died in 2017 of an accidental drug overdose, is hosting the panel, titled “Battling the Opioid Crisis.”

Also participating is Dianna Hart, whose daughter, Demi Lovato, has been vocal about her struggle with addiction.

Trump included the opioid crisis and how it affects children as one part of her three-pronged platform, “Be Best,” which she launched in May. The other two areas of focus are the health and well-being of children, and avoiding the pitfalls of social media, including cyberbullying and negativity online.

At the Lynchburg event, Trump made remarks about what she has seen in her time as first lady thus far, learning about the ongoing drug epidemic in America, and how she hopes to help prevent young people from becoming addicted to opioids.

After listing the startling statistics on the reality of the epidemic, Trump struck a hopeful tone.

“I also believe you have the capacity to not think of this in terms of statistics, but to think of this as a human story and an opportunity to save lives,” she said.

“While you may never personally become addicted, the chances of you knowing someone who struggles with it are very high,” she said. “And if you, or someone you know needs help, you need to be brave enough to ask, or strong enough to stand with them as they fight through the disease.”

She will later take questions from the town hall audience of Liberty University students, her spokesperson Stephanie Grisham told CNN.