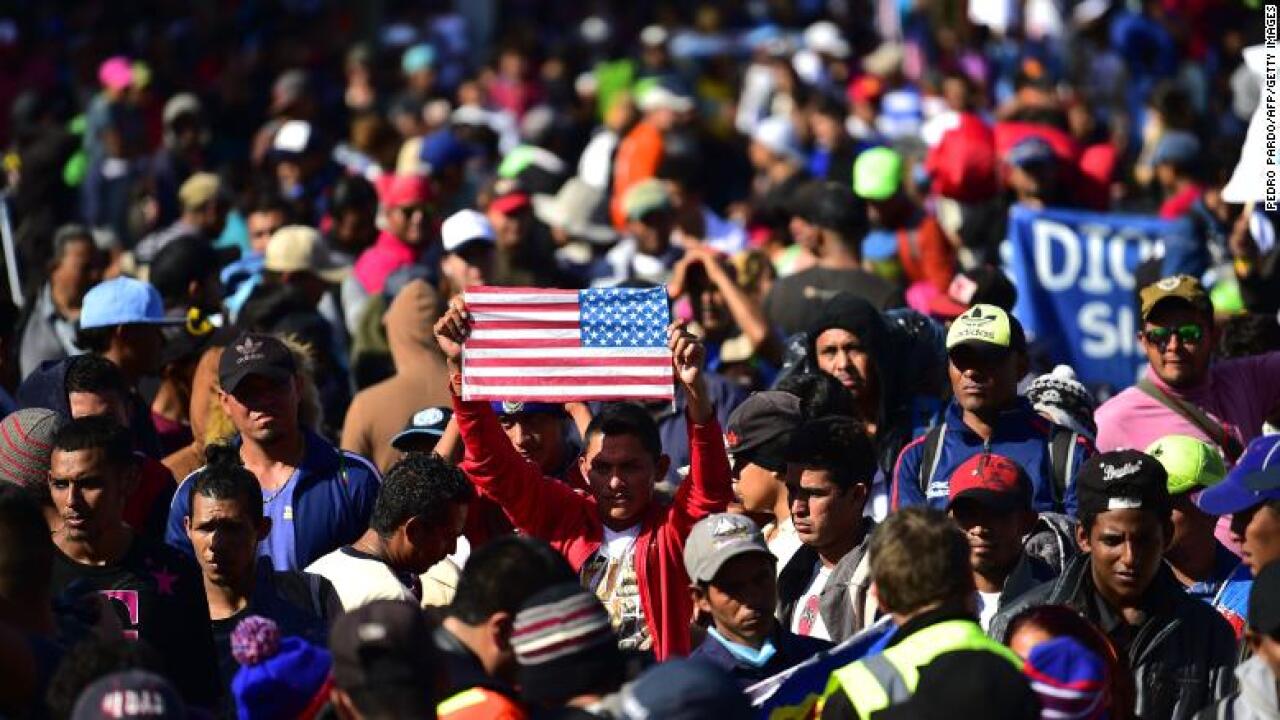 Some migrants who attempted to cross the border illegally from Tijuana into the United States were dispersed by tear gas launched by US authorities, journalists at the scene said.

Two journalists at the scene in Tijuana on Sunday told CNN that after Mexican federal and local police blocked a group of migrants from marching toward the US-Mexico border, some migrants went around the police and tried to cross the border near the San Ysidro Port of Entry.

Authorities on the US side used tear gas to disperse the would-be crossers, the journalists told CNN. Video footage from Reuters shows a cloud of tear gas near the border and people running away.

CNN reached out to Customs and Border Protection about the alleged use of tear gas.

The melee left what is known as the busiest land port of entry in the Western Hemisphere quiet for several hours as CBP temporarily closed off vehicle and pedestrian traffic at San Ysidro. By Sunday afternoon, CBP reopened crossing lanes in both directions to pedestrians, CBP representative Jackie Wasiluk said.

The closures came after about 500 migrants overwhelmed police blockades at another crossing nearby and rushed toward the border, said freelance reporter Alfredo Alvarez, who was in the crowd. The crowds were made up of men, women and children, he said.

CBP deployed additional personnel to San Ysidro on Sunday in anticipation of demonstrations on both sides of the border.

Some of the migrants are believed to have been participating in the protest on the Mexican side. The demonstration began at the sports complex where thousands of migrants are staying while they attempt to gain entry to the United States.

As they reached the border area, some protesters split off toward multiple locations, CBP said.

Some attempted to enter through San Ysidro, Secretary of Homeland Security Kirstjen Nielsen said in a statement.

“After being prevented from entering the port of entry, some of these migrants attempted to breach legacy fence infrastructure along the border and sought to harm CBP personnel by throwing projectiles at them,” Nielsen said.

“DHS will not tolerate this type of lawlessness and will not hesitate to shut down ports of entry for security and public safety reasons. We will also seek to prosecute to the fullest extent of the law anyone who destroys federal property, endangers our front-line operators, or violates our nation’s sovereignty.”

Groups of Central American migrants have been converging on the Mexican border city for days in their quest to gain entry to the United States. Their presence has drawn Mexican troops, protesters and threats from President Donald Trump to close the US-Mexico border to migrants.

The mayor of Tijuana said on Sunday that he would not let the migrants’ actions damage the city’s relationship with its neighbors across the border. Residents of Tijuana work, study and visit the United States each day, and the border closures affect them, too, Juan Manuel Gastélum Buenrostro said on Twitter on Sunday.

The mayor previously said he will not commit city resources to the migrants, including money or public services. He called on the Mexican government — specifically, President Enrique Peña Nieto and his secretary of domestic affairs — to provide assistance.

“The people of Tijuana will not pay for the stay of these migrants. I will not send Tijuana into debt, just like I have been able to avoid the last two years,” he said in a November 22 Facebook post.

“We are dealing with a humanitarian crisis and the federal government must step up to its responsibility!!!”