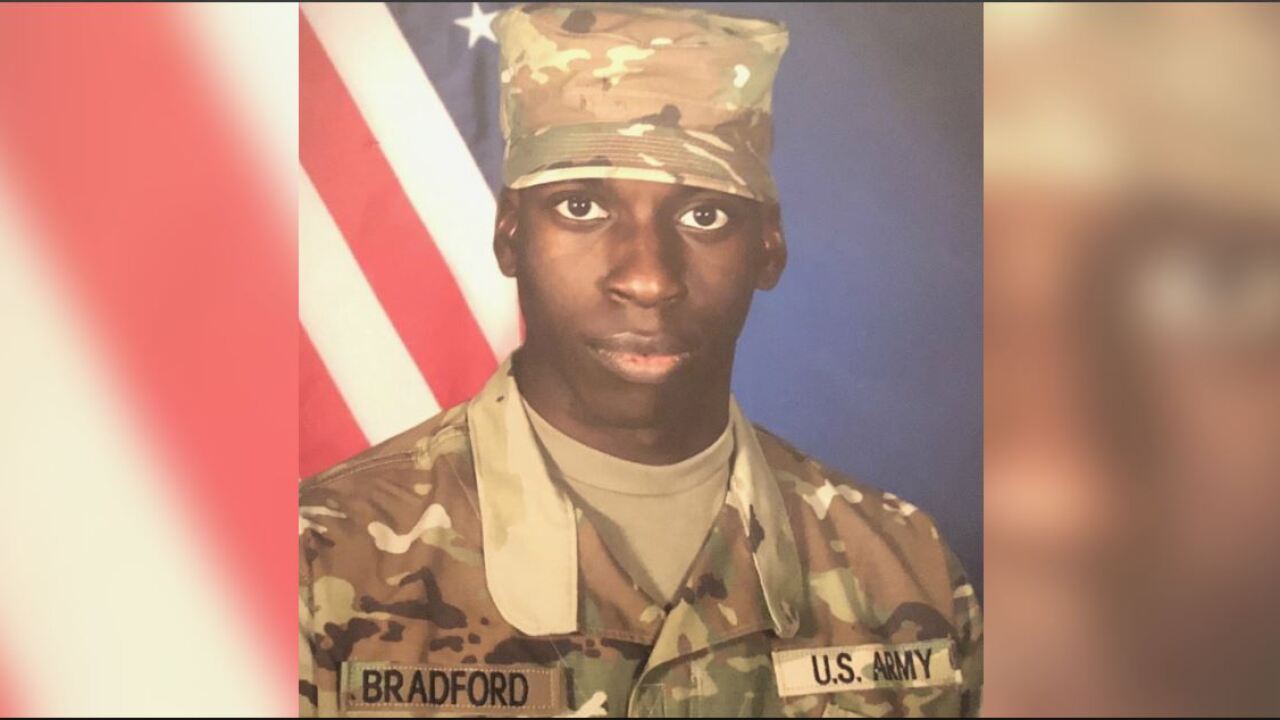 Emantic Fitzgerald Bradford Jr., known as E.J., dressed in basic training Army fatigues. The photo was released by the family attorney, Benjamin L. Crump. Bradford Jr. said on his Facebook page he was a US Army combat engineer. An Army spokesman told CNN he never completed advanced individual training and did not officially serve in the Army.

HOOVER, Ala. — As civil rights attorney Benjamin Crump blasted police on Sunday for the fatal shooting of a black man at an Alabama mall, a relative holding photos of the man collapsed, wailing.

Family members helped her up and consoled her. She repeated a detail that Crump had just offered reporters: Emantic Bradford Jr. had been shot in the face.

Crump and family members accused the Hoover Police Department officer who shot Bradford of rushing to judgment, failing to provide a warning before shooting, and declining to provide medical assistance to the 21-year-old they knew as EJ.

“He saw a black man with a gun and he made his determination that he must be a criminal,” Crump said, flanked by about two dozen of Bradford’s relatives. “They concluded their investigation while EJ was (lying) on the mall floor, bleeding out, dying. … There’s a murderer on the loose largely because police rushed to judgment.”

Police initially said Bradford had shot and injured two people, before saying he was probably not the shooter. Police have not identified the suspect, who is at large.

Bradford’s family slammed the inaccurate report and demanded that investigators immediately release all video of the incident. They also claimed Hoover police never contacted them before the initial report or after correcting it, leaving them to glean details from social media and other police agencies.

“Not only did they assassinate his person, but they truly assassinated his character,” Crump said.

In an appearance later on CNN, Bradford’s father, who spent 25 years as a correctional officer, said he was frustrated with the response from Hoover police.

“I feel like you should’ve reached out to me and his mother, but nobody did,” Bradford said. “That’s not protocol for you just to do something, kill my child and not respond when we’re calling you.”

His son knew members of the Hoover Police Department, according to Crump.

“He considers law enforcement to be family, but they are not treating him like family,” Crump said of the senior Bradford. “They haven’t offered him the courtesy of letting him know anything.”

Crump said Bradford’s parents “knew the child they had raised,” wasn’t the shooter.

“They knew it wasn’t true even before the police retracted their statement,” Crump said.

The officer killed Bradford about 10 p.m. Thursday at the Riverchase Galleria in Hoover, a Birmingham suburb.

Police said he got into an altercation at the mall and opened fire, injuring two people, 12 and 18.

An officer encountered an armed Bradford fleeing the scene and shot him, police said.

After conducting forensic tests and talking to witnesses, investigators said Bradford might have been involved in the altercation but likely did not fire the rounds that injured the victims.

Hoover police referred CNN’s questions to the Alabama Law Enforcement Agency, which has taken the lead role in the investigation. The agency said it would have an update Sunday afternoon.

“No justice, no peace,” they shouted. “No racist police.”

They called for the officer who shot Bradford to be arrested for murder.

The officer is on administrative leave during an investigation, police said. Hoover police also will conduct an internal investigation, Capt. Gregg Rector said.

Relatives have demanded answers but say police haven’t provided any. Bradford’s uncle, Anthony Thomas, told reporters he would not stop fighting until he saw justice.

“My son was a loving — very loving — young man. He would give any of you the shirt off his back,” his mother, April Pipkins, told reporters Sunday. “He loved people, period. He was not a killer.”

Bradford had no criminal record, Crump said. He was a caretaker for his father, who is battling cancer, worked full time and helped his mother financially. He had a concealed weapon permit for the gun he was carrying that day, Crump said.

“EJ was a devoted son and brother, who dedicated his life to serving his country and always doing the right thing,” his family said in a statement.

“As we continue to grieve, rest assured that we are working diligently with our legal team to determine exactly what happened and why this police officer killed our son. We will never forget EJ, and ask for your continued prayers during this incredibly difficult time.”

“They killed him for no reason at all. He wasn’t the shooter,” his aunt, Catherine Jewell, told reporters. “He was a great guy. He was very respectable. … They did him wrong.”

Though Bradford’s Facebook page says he was a US Army engineer, he did not complete advanced individual training and did not serve, said Army spokesman Lt. Col. Manny Ortiz. Crump told reporters he was honorably discharged.

Emantic Fitzgerald Bradford Jr., known as E.J., dressed in basic training Army fatigues. The photo was released by the family attorney, Benjamin L. Crump. Bradford Jr. said on his Facebook page he was a US Army combat engineer. An Army spokesman told CNN he never completed advanced individual training and did not officially serve in the Army.

Witnesses to the shooting at Alabama’s largest enclosed mall described chaos, with customers screaming and staff working to help people escape or hide.

“They (put) us in supply closets and locked the doors. And then we sat there for five to 10 minutes, all freaking out,” Lexie Joyner told CNN affiliate WBRC. “And then they opened the escape-route doors, and we escaped.”

That police would so quickly rescind their account is unusual, CNN senior law enforcement analyst Tom Fuentes said Saturday. But because new information pointed to a gunman on the loose, they had to do so for the public’s sake, he said.