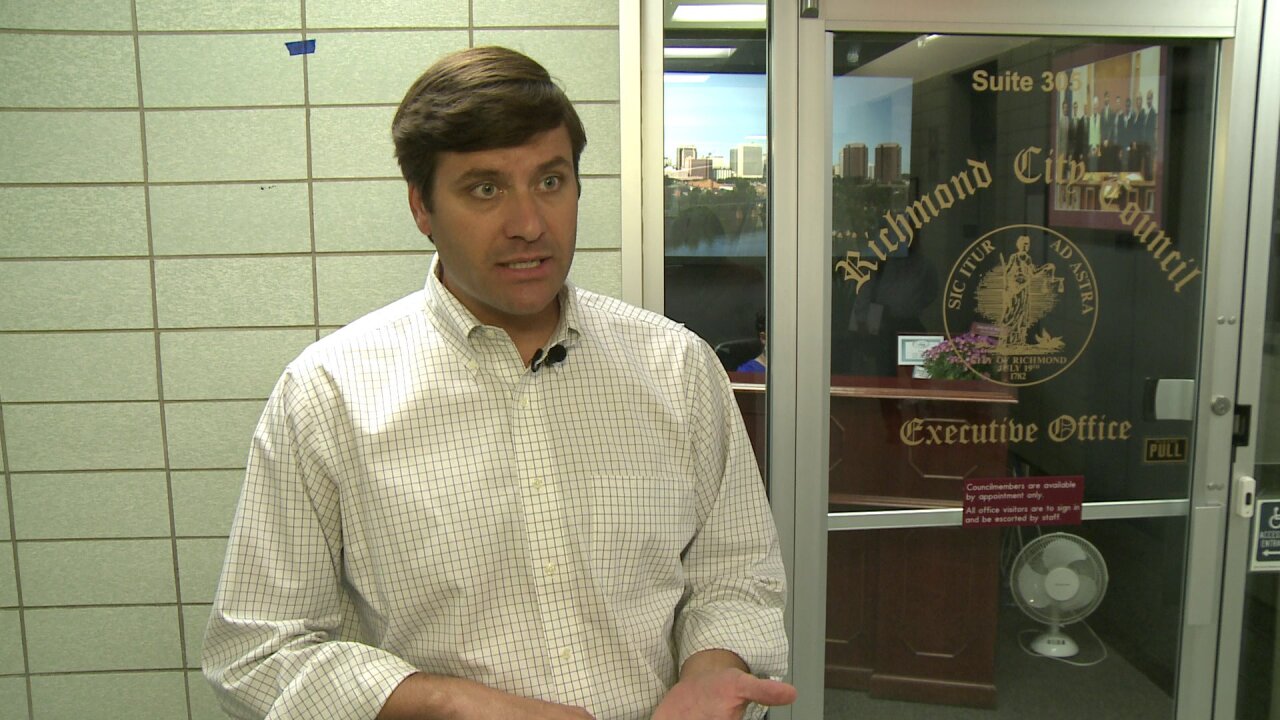 Agelasto said once his remaining two years on council are up, he will focus on family life. He and his wife are expecting a second child in March.

“It is only right that I be more present to provide for my children in these formative early years. Every elected official or public servant knows that they sacrifice greatly and personally to fulfill their duties. I and my family are no different,” Agelasto said. “I also believe in term limits and allowing new voices to be heard and opportunities for new leaders to emerge. I look forward to working with this next generation, whomever that may be, to advance the principles of the 5th District and to continue making our City great.”

Agelasto was first elected to represent the 5th District in 2012.

The 5th District is known as the Richmond Central District and encompasses neighborhood both north and south of the James River from Main Street to Hull Street.

Since 2012 when I was first elected to represent the 5th District on Richmond City Council, I have had the greatest privilege to bring voice to the most diverse constituency in the city. It has truly been my honor to serve. We have celebrated our uniqueness and found common causes to fight for and against. In the six years that I have served, spanning two different administrations, I have helped craft major improvements to our neighborhoods and positively impacted the lives of many individuals that call them home. We have seen crime and the number of blighted properties go down and funding for schools and enhanced public infrastructure go up.

I think about the highs and lows of this time. My first weekend after being sworn into office there was a homicide off Lawson Street. I remember the sadness I felt for the family as we stood at a candlelight vigil reflecting on the life that was gone. I remember the personal failure I felt in 2014 when learning that Traymont Burton had killed his 2-year old son, Keytrell Kelly, the mother of his son Michelle Kelly, and Michelle’s friend Adreena Gary in a triple murder / suicide. I had met Traymont on his block of E. Roanoke Street and talked at length about his future and exchanged emails following up on his job prospects. Sadly domestic violence remains a silent killer that cannot be easily apprehended. Fortunately, we have the Carol Adams Foundation partnering with Riverview Baptist Church to help victims and work to combat this issue.

To address the most murderous place in the 5th District, I have been part of a team that has met monthly for the past 6 years to go over crime reports from Midlothian Village, now known as The Belt Atlantic, and strategize on ways to improve safety and bring needed resources and opportunities to residents. I am proud that it appears the new owner is making good on their commitments to provide quality housing for some of the region’s lowest income earners and make it safer for them.

I remember the night that I also comforted residents as they were evacuated from the burning Stonewall Place senior apartments operated by Richmond Redevelopment and Housing Authority. I remember the marches with Senator Henry Marsh and then Lt. Governor Ralph Northam in support of the Equal Rights Amendment. I remember advancing legislation to provide benefits to city employees of same-sax marriages and to establish the Human Rights Commission. I remember our monthly community clean-ups that rotated to every neighborhood in the 5th District. We’ve evolved from bulk and brush collection in alleys and general litter pick up to now planting trees and covering graffiti. I remember scraping weeds out of the street gutters in Randolph and some of the elder residents stopping in the rain to thank me for working so hard at their doorstep.

I remember of the hard votes on Richmond City Council, particularly related to budgets for schools and capital projects. Since 2012 when the City contributed $124 million to Richmond Public Schools annual operating budget, City Council has increased appropriations every year to now $169 million. That’s a growth of nearly $45 million. And while my proposed cigarette tax failed to be adopted and generate nearly $5 million annually in cash funding for school maintenance, I voted to increase the meals tax to invest in school construction. I have also been a faithful participant of the Education Compact.

I remember tightening the City’s tax abatement program to prevent abuse from developers. I remember working with communities on every Special Use Permit that came to City Council to ensure that the residents had a say at the beginning of the discussion. Even on by-right development, I convened meetings and presentations to inform the public. We have welcomed substantial development in the 5th District including the largest housing project in the City – the Gladdings Residence Hall with 1,500 beds. We have honored our past by creating five historic districts including the Carillon neighborhood to celebrate its role in the Civil Rights Movement in resisting redlining and fighting blockbusting. I remember working to establish the Maggie Walker Community Land Trust to help ensure housing affordability in perpetuity and working to have more than a dozen of the vacant RRHA scattered site properties in Randolph and Maymont rehabilitated and placed with the Trust. From Hull Street to Cary Street, our work to make the 5th District a desirable place to live and grow a business has attracted more than $250 million in investment over the past few years. What was once blighted, vacant properties are now alive with activity.

“A Worker Not Just a Talker” was my first campaign slogan. I have committed myself 100% to serving the 5th District on Richmond City Council and continue to demonstrate the same determination and persistence that drove my ambition to collect 170 signatures from registered voters in the district with less than 48 hours before the initial filing deadline. With 14 civic associations, service on many Council committees and boards, such as Maymont, Richmond Region Tourism, Richmond Regional Planning District Commission, and Richmond Regional Transportation Planning Organization, it is easy to see my day filled with meetings and criss-crossing the city to reach stakeholders and to find solutions. My collaborative approach and efforts to reach “yes” and not simply respond “no” often have obtained better results for the City.

In the past six years, I have also married and have begun to raise a family. My wife, Katherine, and I have a daughter Kate who will be 2 years old in December and we are expecting a son in March of next year. As someone said to me recently, we are going to be playing man-to-man coverage and can no longer rely on zone defense with two children. It is only right that I be more present to provide for my children in these formative early years. Every elected official or public servant knows that they sacrifice greatly and personally to fulfill their duties. I and my family are no different. I thank Katherine for her support while I serve the 5th District on City Council. In order to be the best husband and father, however, we have decided that I will not seek reelection in 2020.

I also believe in term limits and allowing new voices to be heard and opportunities for new leaders to emerge. I look forward to working with this next generation, whomever that may be, to advance the principles of the 5th District and to continue making our City great. I thank all of the many wonderful people at City Hall who have assisted us over these past six years in responding to constituent concerns and addressing them timely. I also thank Ida Jones and Amy Robins for their unwavering commitment to our office and all of the constituents of the 5th District. Much of the credit is shared with these women.

I will continue to faithfully serve the 5th District and interests of our many stakeholders in making the City in the vision that we have for its future. I look forward to what’s to come over the next 2 years in completing my second term.