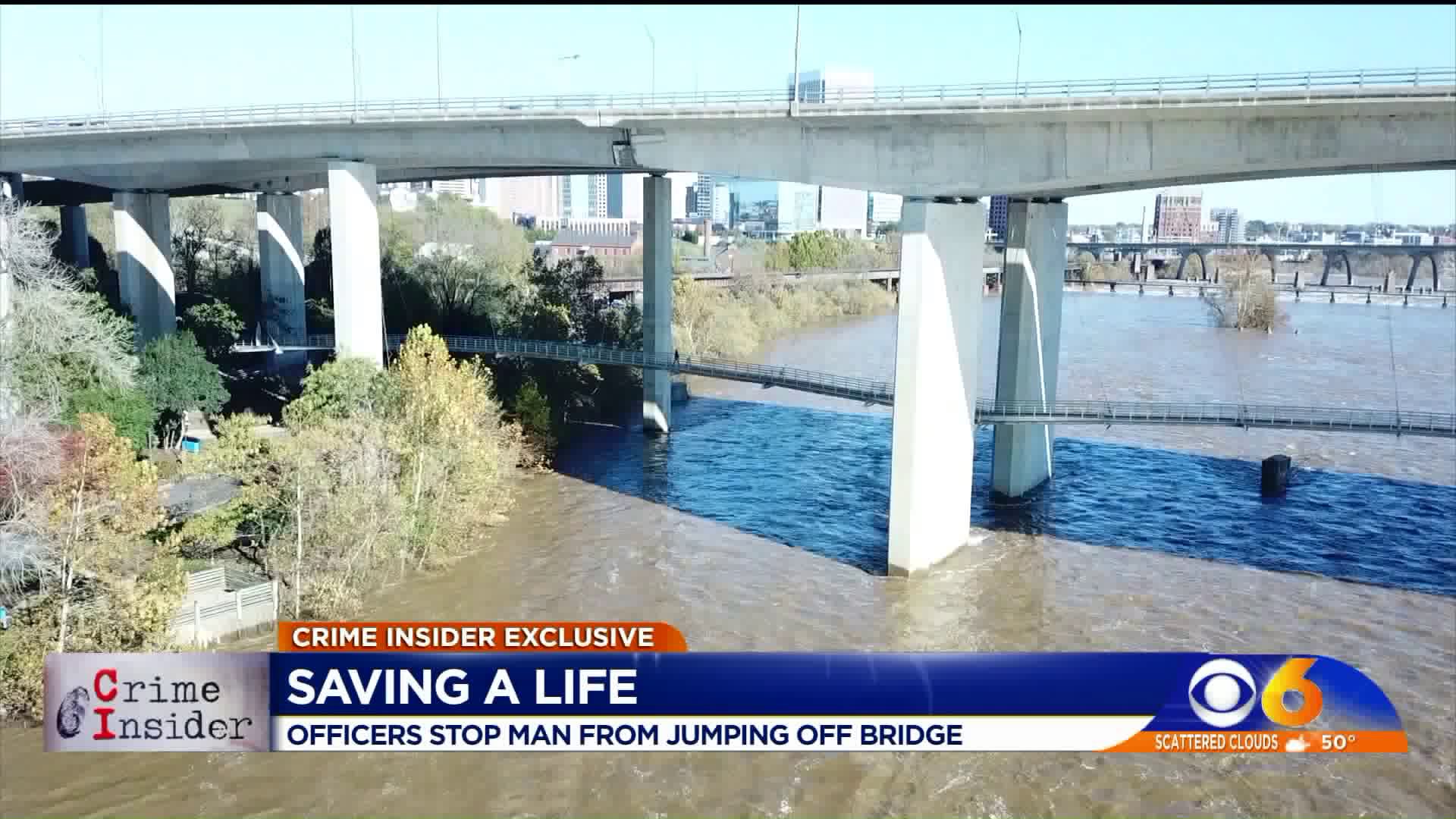 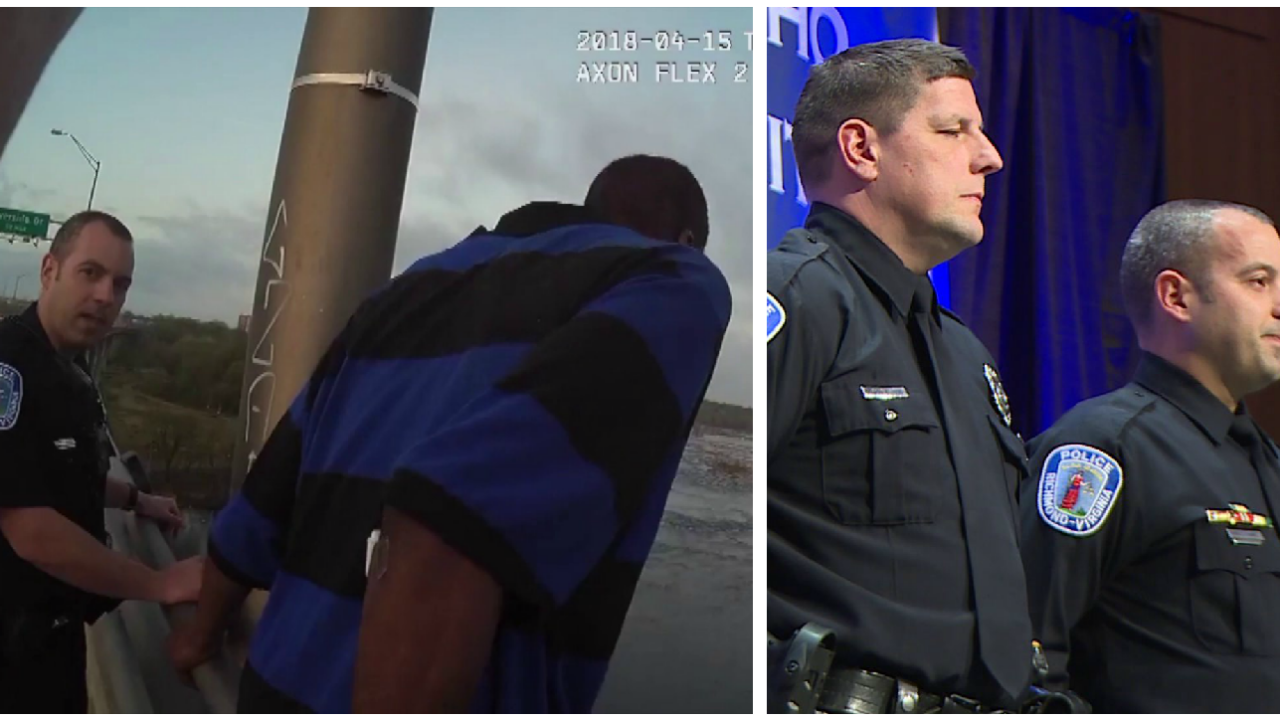 RICHMOND, Va. -- Their day started out the same as many other days. On April 15, 2018,  Richmond Police Officers Daniel Raines and Aaron Henning began their patrol at about 5 a.m.

“It was a Sunday, so we thought it was going to be kind of a slow day,” said Henning.

But things sped up just an hour later.

“A call came in for a possible jumper on the bridge,” recalled Raines.

That bridge is the Robert E. Lee Bridge, six lanes of concrete connecting downtown Richmond to the southside.

Whether you’re high above or down below, the Lee Bridge can provide spectacular views of the James River.

But the bridge also has a dark side.

Over the years the bridge has attracted people with thoughts of suicide. It happened again this past spring.

An off-duty firefighter was driving home when he spotted a man who looked like he was preparing to jump.

Raines and Henning were sent to the scene.

The officers shut down the lanes to traffic and walked towards the man.

“You could definitely tell he was in distress, crying, visibly upset,” said Raines.

“He allowed us to get pretty close,” Raines recalled.

When the officers started talking to him, they learned he was suffering. not just emotionally, but physically as well.

“He stated that he had just walked out of MCV and walked right to the bridge… had suffered from seizures all his life,” said Raines. “I think his grandmother or his mother had passed away... Nobody pretty much there for him anymore.”

To the officers, it was clear the man had made up his mind.

“This guy’s like being on the opposite side of the railing, that's the furthest I’ve seen somebody,” said Raines.

“That was definitely the 'oh crap' moment,” said Henning.

They knew a jump would almost certainly be fatal.

“It was probably maybe two foot of water, or so because you could see the rocks,” said Raines. “I mean, it’s a good long drop, and he’s not going to walk away from that.”

So, they decided to act even though they knew they were putting their own safety at risk.

“Our priority was to save this guy’s life,” said Henning.

“You’re not thinking about yourself at that point,” Raines added.

In the body-camera video, you can see officer Henning silently orchestrate the rescue plan, motioning with his hands to both officer Raines and the firefighter as to how they are going to grab the man.

“I looked at both of them, we’re like, the conversation ain’t going nowhere, made a nod," recalled Henning. "Sure enough, in sync all three of us, the firefighter grabbed him from behind, me and him both put our arms out and pulled him over."

"We gotcha buddy, we gotcha okay," the officer can be heard saying on the body-cam video.

In just two and a half minutes, it was all over.

“It was just, that quick,” said Henning.

The officers took the man to Richmond Community Hospital, where he was voluntarily committed.

After that, it was back to work.

“We literally were at the hospital for maybe like four hours or so and we literally came right back and started running calls… Again... So yeah, it’s just another day, another call, and calls never stop,” said Raines.

The memories of that day haven’t stopped either.

“I don't think about it, really, like, what could have happened until after, then that’s when it hits you,” said Raines.

Fortunately, the officers have a lot of support, both on the job and at home.

“My wife’s a therapist. So it allows me to decompress and I can tell her pretty much anything,” said Raines.

And a sense of humor keeps the bond between these partners strong, especially during tough times.

“My wife’s not a therapist, so I talk to his wife,” Henning said with a laugh.

Because of their bravery, Raines and Henning were recognized at this year’s Valor Awards, a ceremony that honors the heroism of police and first responders.

Each received a bronze award for going above and beyond the call of duty that day. High above the James River, they gave a second chance to a man who had almost hit rock bottom.

Both officers said they're appreciative of the awards, but they don't do their jobs to get recognized.

"There’s a lot of officers that do things on a daily basis that are just as good if not better than what we did that day, and the public will never know about it,” said Henning and Raines.

That day on the bridge, the officers said they relied heavily on the Crisis Intervention Training they have received. That focuses on de-escalating encounters with people suffering from mental health emergencies.

CBS 6 has not been able to identify the man who tried to jump. Henning and Raines said they haven’t seen him since, but hope he is doing better.