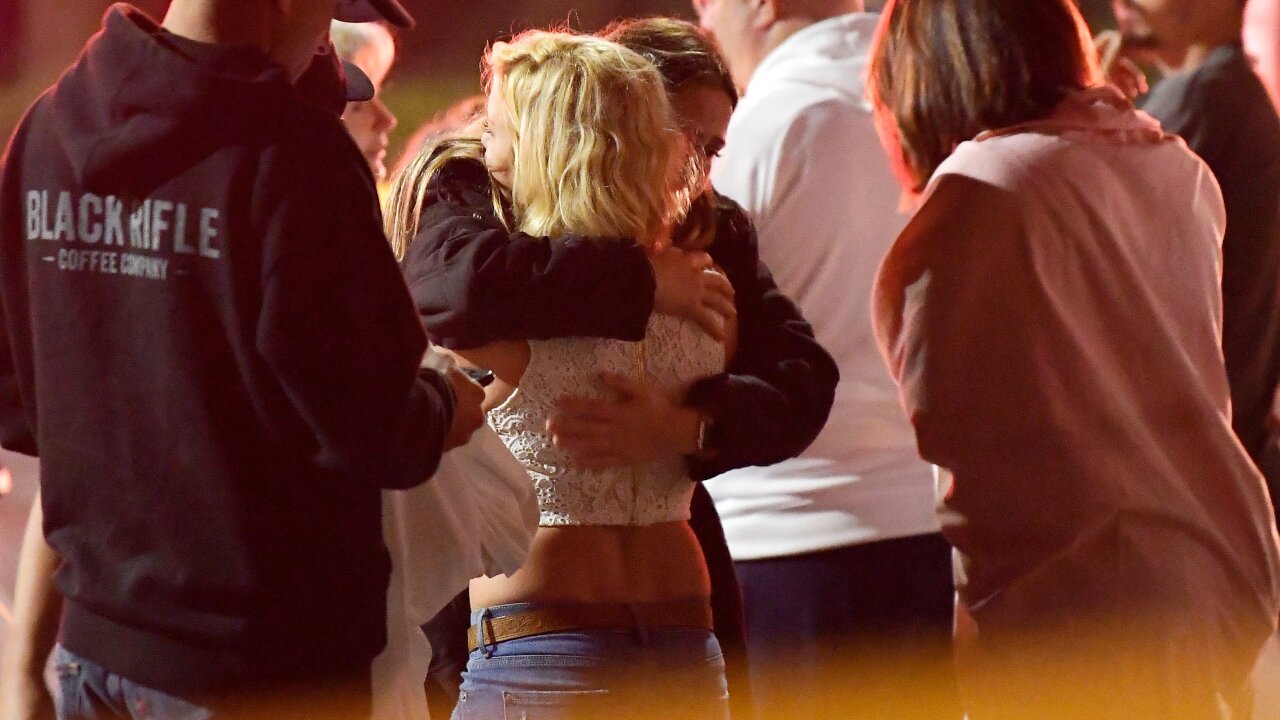 People comfort each other near the scene Thursday in Thousand Oaks, Calif.

Authorities found the gunman dead inside an office adjacent to the bar’s entryway, Dean said. “We believe he shot himself.”

The gunman used a Glock 21 .45-caliber handgun designed to hold 10 rounds plus one in the chamber, but the gun had an extended magazine, the sheriff said. Investigators didn’t immediately know how many rounds the magazine could hold, he said.

Long was a US Marine Corps veteran, Dean said.

“We have no idea what the motive was at this point.”

Deputies are at Long’s home, seeking to serve a search warrant, Dean said.

Investigators believe Long arrived Wednesday night at the bar in a car, shot a security guard who was standing outside and then stepped inside. It appears that Long then shot other security workers and employees inside and opened fire further inside the club, Dean said.

Law enforcement had several previous contacts with Long, including in April, when officers were called to a disturbance at his home, the sheriff said.

“He was somewhat irate, acting a little irrationally,” Dean said. Mental health specialists talked to him and didn’t feel he qualified to be detained under the state’s “5150” mental health detention law, Dean said.

Long also had been a victim of battery at a different Thousand Oaks bar in January 2015, the sheriff said.

‘He was shooting everything’

Holden Harrah, who was at the bar, told CNN the gunman walked in and opened fire within seconds.

“This guy just came out of nowhere and came out with a gun and shot people in Thousand Oaks, California,” Harrah said. “And that’s what’s really blowing my mind, it’s a really safe area.”

The gunfire started during line dancing, witnesses said. People dancing dropped to the floor and hid behind bar stools in stunned silence. Others jumped over chairs and broke windows to get out.

“He was shooting everything, from the speakers to anything,” Kayla Simmons said.

When deputies arrived at the scene, shots were still being fired, Ventura County Sheriff’s Office Capt. Garo Kuredjian said at a news conference.

It was college night at the bar

The bar is a few miles from California Lutheran University, and is a popular spot for students on such nights. The western-style bar hosts theme nights such as country, salsa and swing dancing.

On Wednesday night, students gathered for college country night held between 9 p.m. and 2 a.m., according to the bar’s website.

“I heard a gunshot, I turned around and I saw him shoot a couple more times,” student Teylor Whittler, 19, told CNN affiliate KABC.

“Within a split second, everybody yelled ‘get down’,” she said.

People “dog-piled on top of each other” trying to hide in silence, she said. Some men ran toward them and said the gunman was coming. As they escaped through the bar’s back door, she heard a second round of shots.

There was no screaming, she said. Just gunfire and stampeding crowds.

“I think everyone was in so much of a shock that it was sheer panic,” Whittler said.

Nick Steinwender, who is part of the university’s student government, said his friends were inside the bar when the shooting started. He described what they told him to the affiliate.

“It was chaos, people jumping out of windows, hopping over gates and just trying to get out,” he said. “From what I heard, the gunman started shooting at the front desk. … Students were hiding in the attics, bathrooms and stuff like that.”

Thousand Oaks is in Ventura County, about 40 miles from downtown Los Angeles.