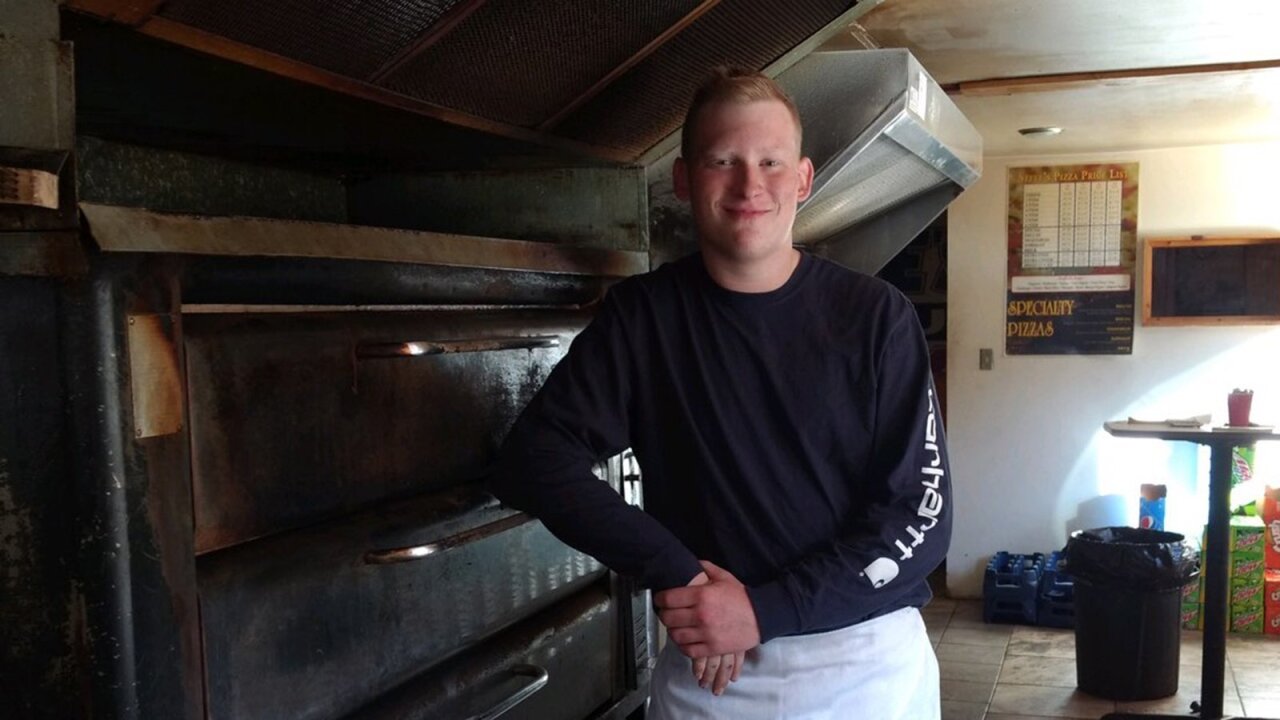 Dalton Shaffer of Steve’s Pizza: “I just want people to think about the family and pray for them.”

When Julie Morgan and her husband, Rich, lived in Battle Creek, Michigan, they would stop by Steve’s Pizza for dinner every payday.

That was 25 years ago. To celebrate her birthday this year, the couple — who now live in Indianapolis — wanted to take a trip to their favorite pizza place.

Instead, they ended up in the ER, where Rich Morgan was told his cancer had worsened and that he had weeks — maybe days — to live. He was placed in hospice care.

Steve’s Pizza doesn’t deliver. But when a manager at the store heard the couple’s story, he decided to take two pies to them himself — even though they were 225 miles away.

It all began with a phone call

During the course of their marriage, the Morgans moved around several times. But for them, Steve’s has always been the benchmark by which all pizzas were measured.

“I can’t possibly describe how delicious this pizza is — but several moves and all these years later, it is still the gold standard and we’ve never found a better pizza yet,” Julie Morgan wrote on Facebook.

When her dad, David Dalke, found out about their birthday plan — and how Rich’s sudden diagnosis dashed it — he called Steve’s Pizza hoping they might send a note to the couple.

“I said ‘I know you’re busy.’ I explained the situation and said, ‘If you ever make it happen, just a text message to Rich and Julie that you’re sorry they couldn’t make the trip,'” Dalke told CNN.

That’s all he was hoping for: a note.

“About five minutes later he called me and he said, ‘I want to know what kind of pizza they like,” Dalke said.

It was an unusual request, but Dalke told him anyway: Pepperoni and mushroom.

On the other end of the line was Dalton Shaffer — the 18-year-old grandson of Steve, original owner of the pizzeria. Shaffer told Dalke it was near the end of the night, and as soon as he closed the store, he’d head to the house with their two favorite pizzas.

“I said, ‘Wait a minute, did you understand that I am in Indianapolis? I’m not next door?'” Dalke said.

It’s about a three-and-a-half-hour drive between the two cities. But Shaffer said he didn’t have to think twice and got on the highway without telling anyone from his family or the store.

“It was kind of a spontaneous reaction,” Shaffer told CNN. “I’m happy I did it, and on the trip down I was happy doing it.”

Dalke kept the lights on and waited until 2 a.m., when Shaffer pulled into their driveway.

Shaffer handed Dalke the two pizzas, and got ready to drive back to Michigan — another three-and-a-half-hour drive.

“I told him to come in, have something to eat, drink. I asked if he wanted me to put him up for the night,” Dalke said. “But he said ‘I’ve got to get up because I’ve got to go to work the next day.'”

Dalke said what the world needs is “more Daltons.”

“There’s so much goodness in people — and there are people in this world that will stretch out, and care and not think twice about it,” he said. “We’re going through grief but, by golly, there’s something good that’s happening.”

And that’s the message Shaffer hopes to spread with his act of kindness.

“I have already gotten a ton of phone calls from people saying they were inspired in the future to help other people and to be able to do things like that. To me, that right there is what I want,” he said.

“I just want people to think about the family and pray for them.”