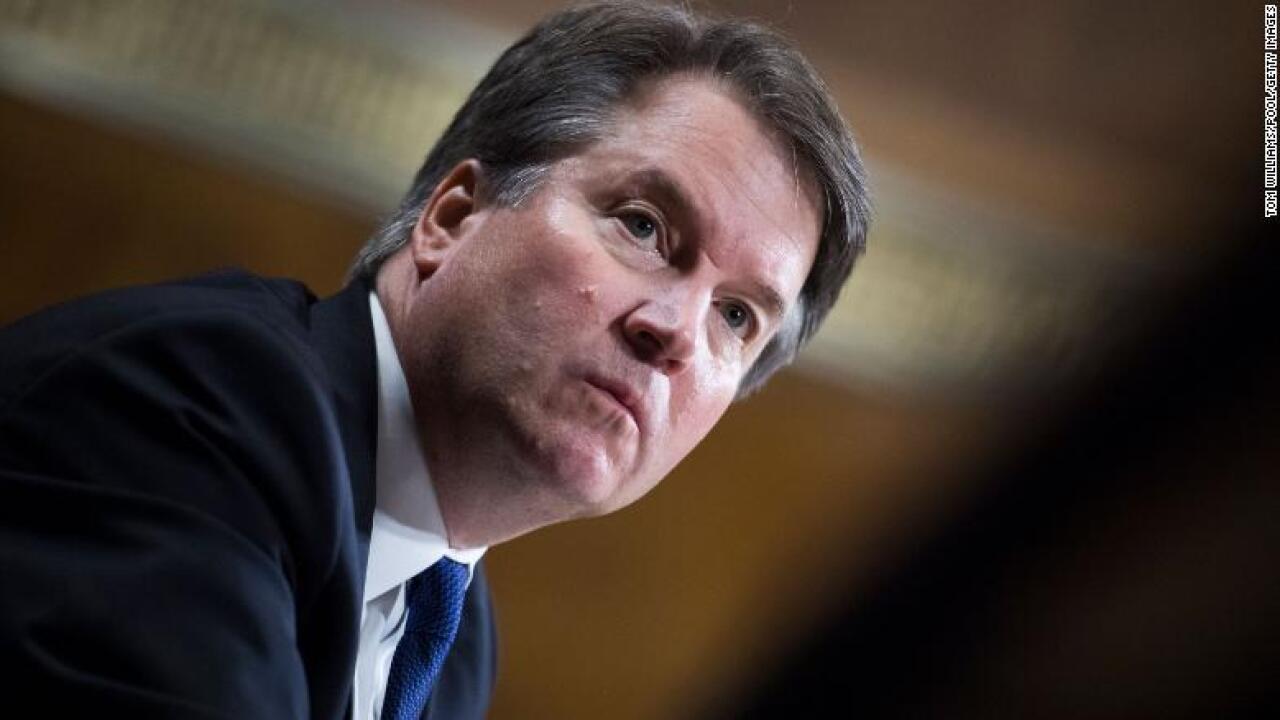 UNITED STATES – SEPTEMBER 27: Judge Brett Kavanaugh testifies during the Senate Judiciary Committee hearing on his nomination be an associate justice of the Supreme Court of the United States, focusing on allegations of sexual assault by Kavanaugh against Christine Blasey Ford in the early 1980s. (Photo By Tom Williams/CQ Roll Call)

The Senate confirmed Brett Kavanaugh to the Supreme Court Saturday afternoon, likely cementing a conservative majority on the court for a generation and bringing to an end months of bitter partisan feuding marked by shocking allegations of sexual assault and vehement and angry denials from the nominee.

The final vote was interrupted several times by protesters as senators sat silent at their desks for the formal roll call vote.

“I do not consent, where’s my representation,” one yelled.

The confirmation marks a major victory for President Donald Trump, who will soon be able to take credit for appointing two conservative justices to the Supreme Court during his relatively brief time in office.

Democrats railed against the nomination in Senate floor speeches Friday night and Saturday morning, and protests opposing Kavanaugh are expected throughout the day on Saturday. But the GOP has the votes to successfully confirm Kavanaugh.

Large groups of protesters gathered outside the Capitol building and across the street at the Supreme Court ahead of the final vote on Saturday. People on the steps of the Capitol chanted “vote them out!” and “the whole world is watching,” messages that at times met with jeers and boos from others in the crowd.

In a sign of the tense mood at the Capitol, Republican Majority Whip John Cornyn of Texas was interrupted twice by yelling from protesters in the Senate gallery, which is open to visitors. Earlier in the day, Cornyn told a group of reporters that this has “not been the Senate’s finest hour,” and said that “a better path forward” is needed.

Senate Judiciary Chairman Chuck Grassley offered up some words of praise for protesters ahead of the vote. The Iowa Republican told reporters that his message to protesters would be, “thank god that you’re willing to exercise your First Amendment rights of association and free speech. Keep it up, because it’s going to make America stronger.”

Shortly before the vote, Trump said Kavanaugh “will be a great justice of the Supreme Court.”

“He’s just an extraordinary person… and I think he’s going to make us all very proud,” Trump added.

Senate Minority Leader Chuck Schumer called the nomination “one of the saddest moments in the history of the Senate,” and said, “this chapter will be a flashing red warning light of what to avoid.”

Republicans “conducted one of the least transparent, least fair, most biased processes in Senate history, slanting the table from the very beginning to produce their desired result,” he added.

Majority Leader Mitch McConnell, who helped push through Kavanaugh’s nomination despite moments where it looked like it could fail, effusively praised Kavanaugh.

“The President nominated a jurist who has been described by legal peers of all political stripes as a superstar,” McConnell said, later adding that “Judge Brett Kavanaugh is among the very best our nation has to offer.”

Friday morning began with uncertainty over whether Senate Republicans had the support necessary to push the nomination across the finish line, but the day ended with confirmation all but assured after Republican Sen. Jeff Flake of Arizona, followed by Republican Sen. Susan Collins of Maine and red state Democratic Sen. Joe Manchin of West Virginia, announced they, too, would support Kavanaugh.

It was not clear that Kavanaugh would have the votes for confirmation until Collins said in a Senate floor speech that she would support his nomination.

In outlining her argument, Collins argued that while she believes that Christine Blasey Ford, who testified last month before the Senate Judiciary Committee that Kavanaugh sexually assaulted her in the early 1980s, “is a survivor of a sexual assault,” she does not believe that the allegation was corroborated.

“I do not believe that these charges can fairly prevent Judge Kavanaugh from serving on the court,” Collins said. Kavanaugh has denied the allegation.

The lone Republican to oppose the nomination was Sen. Lisa Murkowski of Alaska, who told reporters that while she believes Kavanaugh is “a good man,” she also felt the confirmation process had become about something “bigger than a nominee.”

In a floor speech later on Friday, Murkowski expressed sympathy for both Ford and Kavanaugh. She said, however, that she sets a high bar for nominees to win confirmation and talked about the importance of selecting judges who will act at all times in a manner that promotes “public confidence” in the judiciary.

“In my conscience … I could not conclude that he is the right person for the court at this time,” the senator said.

Despite her opposition to Kavanaugh, Murkowski said she plans to ultimately vote “present” in the final vote as a gesture of goodwill toward her Republican colleague, Sen. Steve Daines of Montana, who supports Kavanaugh, but will be in Montana to walk his daughter down the aisle at her wedding. The move will not impact the overall outcome of the vote, but it will allow for the margin to be the same as it would have been if Daines had been there to participate and prevent a situation where Daines would have to fly back Saturday to cast a vote to ensure the result.

“I do hope it reminds us that we can take very small steps to be gracious with one another and maybe those small, gracious steps can lead to more,” Murkowski said.