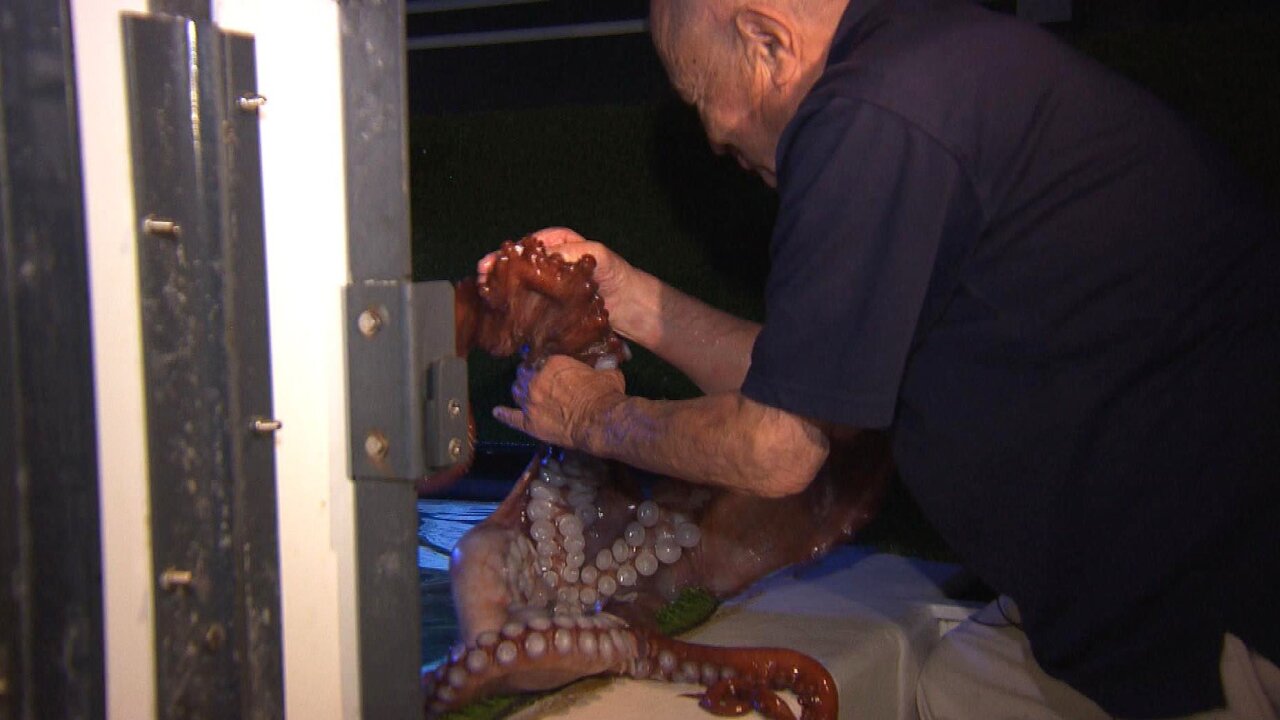 **EMBARGO: Boston, MA** An 84-year-old volunteer known as the “octopus whisperer” was honored at the New England Aquarium.

They call him the “octopus whisperer,” and for nearly 25 years this 84-year-old has volunteered to work with the eight armed creatures at the New England Aquarium. On Thursday night, he and hundreds of other aquarium volunteers will be honored for their time and commitment. But he’ll tell you, getting to know these fascinating sea animals is reward enough.

“As you can see, she’s getting playful,” says Wilson Menashi, super volunteer at the NE Aquarium as he interacts with Freya, a three year old octopus.

She and Wilson are as close as a human and a sea creature with eight arms can be.

“I’m comfortable with them, and they feel it,” Wilson says. He started volunteering at the aquarium after retiring from his engineering career, and immediately got interested in octopus.

“When we first started with the octopus about 23, 24 years ago, nobody dared touched them,” he remembers. Wilson became the first volunteer to do that, getting used to the suckers on each tentacle.

“You get a lot of hickeys on your hand. How do you explain a whole armful of hickeys to your wife, but she understood,” he says.

And Wilson quickly learned something important.

“They definitely all had entirely different personalities. They’re very intelligent. They will react with you and they want something to do,” he says.

So Wilson designed several boxes with latches. A crab is placed inside as an incentive, and the octopus figures out how to open them.

“Just to challenge them a little bit. See what they could do,” he says.

Marine biologist Bill Murphy studies the creatures. “Wilson really enjoys their intelligence and interacting with them. And it’s very different from octopus to octopus, so it always keeps it new and interesting,” Murphy says.

And Wilson plans to keep on, “As long as I can,” he says.

The Aquarium has about 1,000 volunteers essential to the operation. At the dinner to honor them, Wilson will be front and center.