This 94-year-old hands out chocolate bars to strangers. And people love it 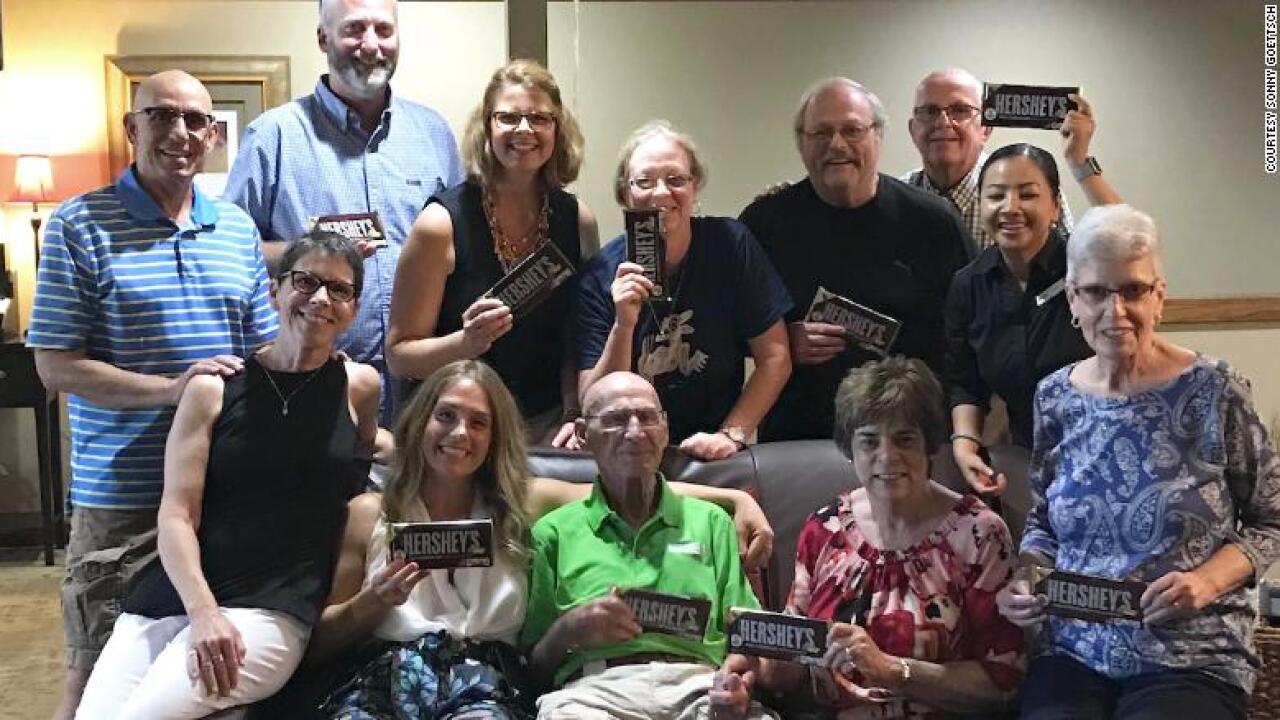 On his 94th birthday, Williams brought chocolate bars as gifts for his friends — and the staff and customers in the restaurant where they ate.

Bob Williams hands out Hershey’s bars outside a Dollar General store near his home.

Every Saturday, Bob Williams walks into a Dollar General store in Long Grove, Iowa, and buys a box of Hershey’s milk chocolate bars. Williams hands two to the cashiers, a third to the person behind him in line and then sets off around town handing the rest out to anyone he sees.

The World War II vet, retired teacher and high school football coach, 94, has been melting hearts this way around Long Grove, Iowa, for more than 10 years — during which time he’s given out nearly 6,000 chocolate bars.

Williams is showing that sometimes taking candy from a stranger might be a good idea. And Hershey’s, inspired by his example, is spotlighting him in a new marketing campaign.

Bob Williams keeps hundreds of chocolate bars in his freezer so that he can give them out to people each day.

Williams’ random acts of kindness don’t just start in the Dollar General checkout line. He keeps his own stash at home in a freezer, which is always stuffed to the top with hundreds of chocolate bars.

Before leaving the house, he often takes a couple with him to hand out to folks around town.

“It puts a smile on their face,” Williams says in a video Hershey’s made about his generous exploits. “It just makes me feel good.”

Jan Hartwig-Heggen, one of Williams’ close friends, told CNN that the “Candy Man,” often clad in a yellow slicker or the gear of his beloved Iowa Hawkeyes, is a popular guy around their town of 800 people. “People love to honk at him when they drive by.”

Over the years she estimates Williams has given her “two or three hundred” candy bars. Oftentimes, he leaves one at her front door.

“That’s his signature,” she said. “You always know when Bob has been there.”

Williams has become a grandfatherly figure to people like Darla Fay, who lost her own grandfathers before she got to know them.

One frigid February morning not long after they met, he paid her a visit, sheepishly asked the much younger — and married — Fay, “Will you be my Valentine?” and handed her an extra-large Hershey’s bar.

“Needless to say, I got a chocolate bar and Bob got a great big hug!” Fay told CNN.

He’s been visiting her almost every day since, often with a candy bar.

Fay says his chocolate bars evoke the same feelings she got as a kid with “the first glimpse of all the gifts Santa left under the tree. Those are the moments in life that you remember.”

On his 94th birthday, Williams brought chocolate bars as gifts for his friends — and the staff and customers in the restaurant where they ate.

Last year, Williams’ neighbors reached out to an editor of the local Quad-City Times, who drove out to interview him and wrote a column. Williams told the editor how he regularly brings 18 chocolate bars to his doctor’s office and recited the names of everyone working there. “There are two Lisas, a Mary Beth, and a Cindy,” he said.

And he described his daily visit to a bench he purchased in memory of his late wife.

“She gives me orders for the day,” he told the newspaper.

Earlier this year, a small magazine called “Our Iowa” did a feature on Williams. A local woman sent the article to her son, who worked in Hershey’s corporate strategy department.

Williams retired from the classroom decades ago. But he’s continuing to educate others in a different way.

“He’s teaching all of us how to pay it forward,” one woman says in the Hershey’s video.

In honor of founder Milton Hershey’s 161st birthday last Thursday, the chocolate giant sent its employees out to mirror Williams’ example, handing out chocolate bars as part of its #heartwarmingtheworld initiative.

Gas station attendants in Rock Hill, South Carolina, handed out chocolate bars this week to those grappling with the effects of Hurricane Florence.

Rock Hill, SC getting ready for hurricane Florence by getting and giving. #HeartwarmingTheWorld pic.twitter.com/pVwI9t2zUk

And Hershey’s will keep doing its part to keep Williams’ efforts going. The company says it’ll keep sending him “all the bars he’ll ever need.”