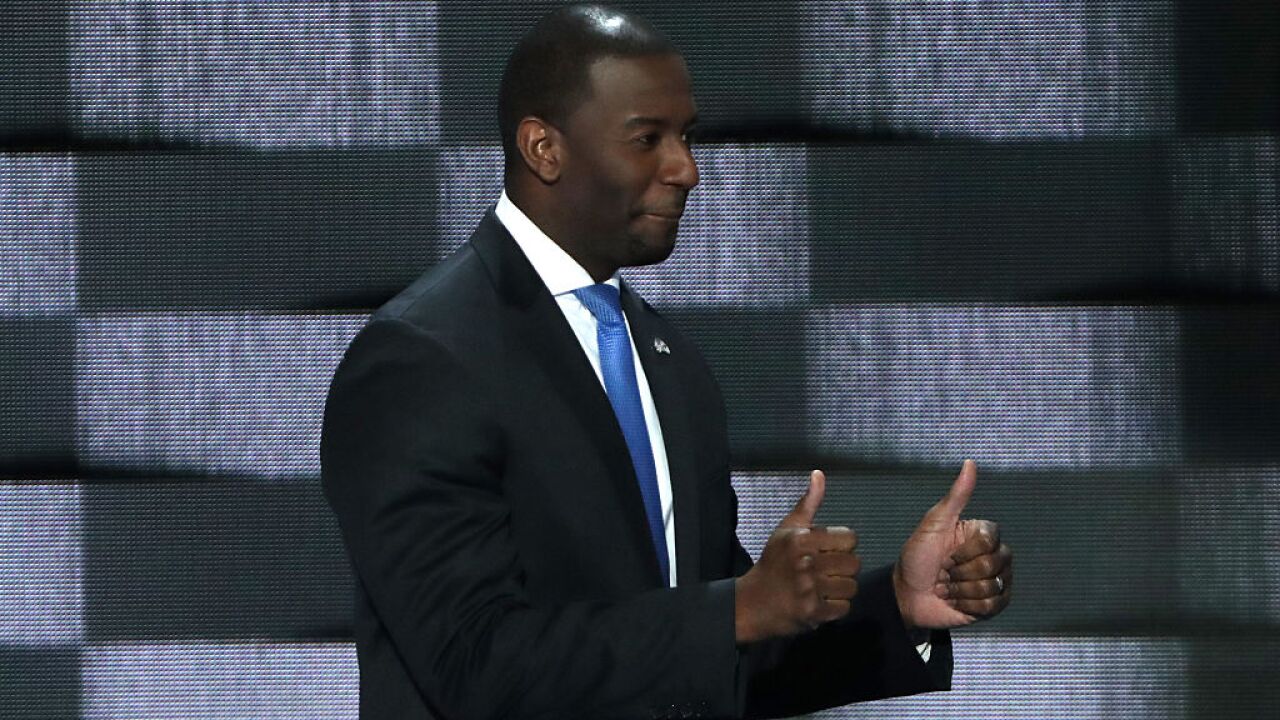 Tallahassee Mayor Andrew Gillum will win the Democratic nomination for governor of Florida, CNN projects, scoring a major victory for the party’s progressive wing while taking another step toward becoming the state’s first black chief executive.

Backed by Vermont Sen. Bernie Sanders and a coalition of progressive groups, Gillum upset former Rep. Gwen Graham, who led in the polls for most of the campaign. He led a field of five competitive candidates in which he was the only non-millionaire — and only supporter of “Medicare for all” single-payer health care. Gillum is the first black candidate to win a major-party gubernatorial nomination in Florida.

His victory sets Florida, the biggest swing state in presidential elections, up as a major test of the political atmosphere this fall. Gillum will face Rep. Ron DeSantis, a Trump-endorsed Republican, in a race that pits two 39-year-olds, who in many ways mirror their parties’ national moods, against each other.

DeSantis defeated Adam Putnam, the state agriculture commissioner, CNN projects. His win was expected — but Putnam entered the race as the establishment favorite and raised more money than DeSantis. His victory proved the power of Trump’s endorsement in swaying GOP primary voters.

Gillum’s victory, though, came as a stunner in a wide-open contest. Democrats in the race, including billionaire Jeff Greene and wealthy former Miami Beach Mayor Philip Levine, spent more than $100 million for the chance to wrest back control of the governor’s mansion, which has been in Republican hands for two decades. Gillum got a late boost when liberal megadonors Tom Steyer and George Soros led a group that donated $650,000 to his affiliated political action committee.

The governor’s race is one of two major statewide contests in Florida in November’s midterm elections.

CNN also projects that Florida Gov. Rick Scott will win the Republican Senate primary to face incumbent Democratic Sen. Bill Nelson for a seat Democrats must hold if they hope to have a shot at the Senate majority.

Polls have closed in Arizona, Florida and Oklahoma.

In Arizona, the day before the state begins memorializing Sen. John McCain, Republicans will make a major statement about the future of the party of McCain and Trump.

McSally distanced herself from McCain during the campaign while Ward and Arpaio openly attacked him. All three candidates are embracing Trump in a sign of the President’s power over Republican voters.

Trump infamously attacked McCain’s service during the 2016 presidential campaign, and McCain was vocal in his opposition to Trump on several issues.

The race is the headliner on a day in which Arizona, Florida and Oklahoma are selecting their nominees in governor’s races and Arizona and Florida will also pick their candidates for Senate contests.

In Arizona, Republican Gov. Doug Ducey is up for re-election. Democratic state Sen. Steve Farley, Arizona State University education professor David Garcia and Kelly Fryer, the CEO of the YWCA Southern Arizona, face off to challenge Ducey in a traditionally red state that has shifted to the left in recent years: Hillary Clinton lost there by just 4 percentage points.

The primary comes days before Ducey faces a major decision: Who to appoint to fill McCain’s seat. He’ll have to choose between a Trump-like Republican and someone in the McCain mold — or could try to bridge the gap, potentially with a placeholder pick.

And in Oklahoma, Democratic state attorney general Drew Edmondson will face the winner of a GOP battle between Tulsa businessman Kevin Stitt and Oklahoma City Mayor Mick Cornett for the seat being vacated by term-limited Gov. Mary Fallin.

Arizona and Florida also each have several primaries for House seats that are expected to be competitive in November’s midterm elections.

The Arizona Senate contest is for the seat of retiring Sen. Jeff Flake — not McCain, whose replacement will be appointed by Ducey. Democratic Rep. Kyrsten Sinema is the heavy favorite to take on the Republican primary winner.

Trump hasn’t endorsed a candidate. But the race has underscored how the Republican Party in Arizona has shifted from one where McCain, the 2008 GOP presidential nominee, reigned supreme, to one where Trump is the dominant force.

All three GOP candidates cozied up to the President. McSally, in particular, dropped her 2016 campaign criticism of Trump and aligned herself closely with the President — particularly on immigration issues.

The race’s outcome could already be decided. More than 437,000 Republican early votes had been mailed in by Friday. And if 2018’s primary follows Arizona’s trend of high early voting numbers, about 75% of the state’s primary voters have already cast their ballots.

Polls have shown Arpaio in third place — but Republican strategists say he is competing for the same group of die-hard conservative voters as Ward, meaning that his presence in the race has cut directly into her support.

A McSally win in the last competitive primary on 2018’s Senate battleground map would be a major relief for Republicans who have watched her all-but-certain opponent Sinema spend millions of dollars on TV ads branding herself as a centrist who would “end the partisan nonsense and protect Arizonans” on issues like health care.

It’s why Colorado Sen. Cory Gardner, the chairman of the National Republican Senatorial Committee, urged Trump to endorse McSally in a recent phone call, a source familiar with the call said.

Trump didn’t endorse, but he gave McSally a shout-out at a recent event at Fort Drum in New York. He noted that McSally is “not only an Air Force veteran, but the first woman ever to fly a fighter jet in combat in US history.”

“And I got to know her very well, and she is terrific: Congresswoman Martha McSally,” Trump said.

National Republicans see the Arizona Senate race as crucial to keeping their majority, and think McSally is the only candidate that gives them a chance to win the race. Until recent weeks, they’d been frustrated she had not put the primary away.

How McSally won over the right

McSally’s primary campaign has been a case study in how an establishment Republican — one who had sharply criticized Trump in the wake of the “Access Hollywood” video in 2016 — could win in the Trump era.

She aired an ad featuring Trump calling her the “real deal.” She withdrew her co-sponsorship of a bill that offered “Dreamers” a path to citizenship, mimicked Trump’s attacks on “chain migration.” She became a fixture on Fox News, where she aligned herself with Trump and heaped praise on the President.

And she cast Ward — who’d launched her campaign as a strident critic of Flake and McCain, a Trump opponent, with the backing of then-White House chief strategist Steve Bannon — as a Trump critic.

“McSally did a masterful job capitalizing on Ward’s ‘phonyisms,'” said Robert Graham, a former Arizona Republican Party chairman and a Trump ally. “The religious right freaked and abandoned her and the immigration people consider her soft.”

Another key moment came in a late-July editorial board meeting at The Arizona Republic — the only time McSally and Ward would debate, with Arpaio declining the invitation — on the topic of abortion. Both said they want Roe v. Wade repealed, but Ward called for a “more incremental” approach, including a ban on abortions after 24 weeks, while McSally said she favors banning abortion in all cases except rape, incest and when the life of the mother is in jeopardy.

Ward also said abortion is debated “in a fashion that was designed to raise money for people on both sides of the issue.”

The comments alienated anti-abortion activists who were a key part of the conservative constituency a McSally challenger would have needed.

Then, late in the campaign, Ward courted controversy when she invited Mike Cernovich — a far-right commentator who promoted the infamous “Pizzagate” conspiracy theory — on her bus tour, and then told NBC News that “attaching those things to me is ridiculous.”

Explaining her decision to invite Cernovich, Ward said: “We need to have a hook to get you guys interested in seeing the bus tour.”

Ward courted controversy late in the race, too. She apologized Monday for a Facebook comment suggesting an announcement by McCain’s family that he would end his cancer treatment was designed to hurt her campaign, saying her comment had been misinterpreted.

Arpaio, meanwhile, watched his campaign descend into chaos. The Federal Election Commission laid out a host of problems with his first-quarter campaign finance report in a letter to Arpaio’s campaign. And long-time consultant Chad Willems, who until recently was Arpaio’s campaign manager, was receiving the vast majority of the $1.3 million raised for the campaign. His campaign ended in a fizzle, as Ward attracted headlines as the anti-establishment candidate.

“McSally proved to voters for months that she has the ability to laser-focus in on Sinema’s weaknesses in a way that highlights her own strengths, even while facing competitors in a primary,” said Brian Anderson, an Arizona GOP strategist and former aide to Ducey.

“Kelli Ward continued to remind everyone,” Anderson said, “that she’s a ticking time bomb who can’t talk her way through a question about Pizzagate — let alone face an opponent like Sinema.”