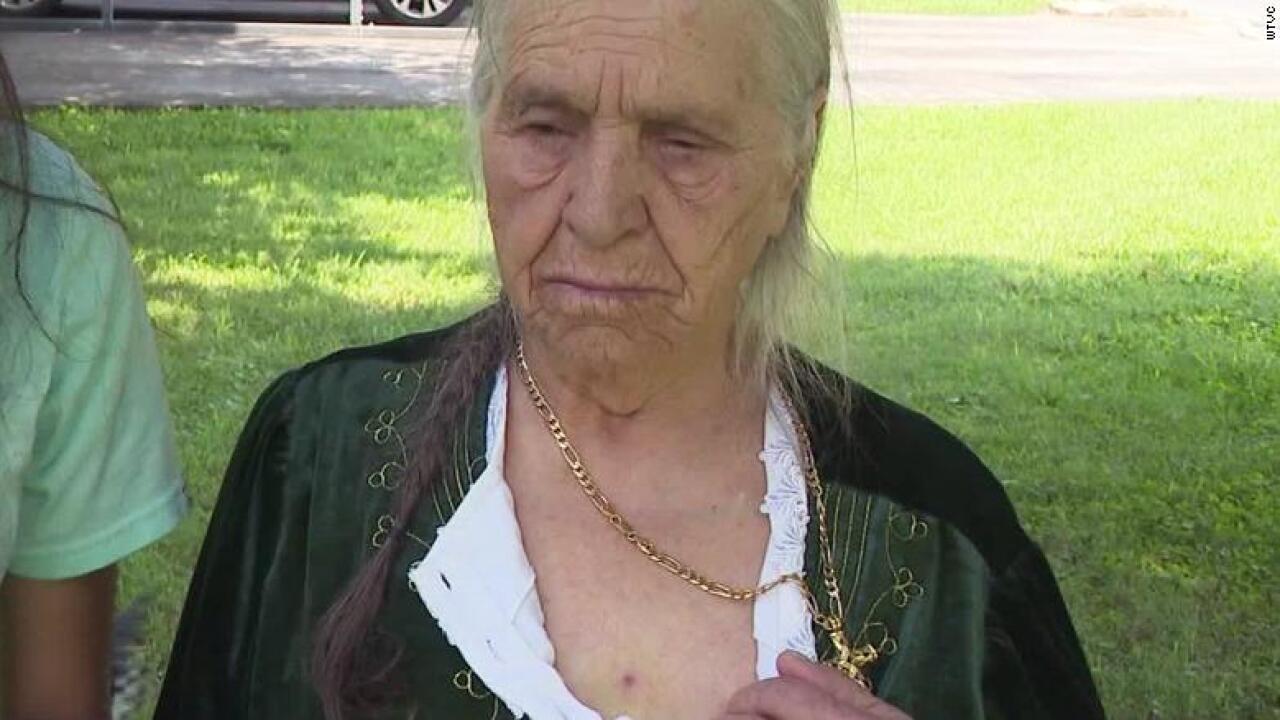 An 87-year-old grandmother using a knife to cut dandelions in the woods near her rural Georgia home last week was taken down by a police Taser and arrested, according a police report.

Martha Al-Bishara was arrested for criminal trespass and obstruction of a police officer, according to the report. Chatsworth Police said Al-Bishara did not drop a steak knife despite several commands and a demonstration by officers. At one point, she walked toward officers with the knife, police said.

Police had gone to a wooded area near a Boys and Girls Club last Friday after an employee called 911 to report that an elderly woman was walking around with a knife in the community, around 80 miles north of Atlanta.

“There’s a lady walking on the bike trails, she has a knife and she won’t leave,” the caller told a dispatcher. “She told me she doesn’t speak English, and she’s walking up the trail with a knife towards me.”

“It looks like she’s walking around looking for something, vegetation to cut down or something. She has a bag too,” the caller said.

The Boys and Girls Club employee told the dispatcher that the woman did not seem to be a threat. “But she came at you with a knife, though, right?” the dispatcher asked. “No, she just brought the knife onto the property in her hand, she didn’t try and attack anybody or anything,” the caller said.

Two Chatsworth officers along with Police Chief Josh Etheridge arrived at the scene, and repeatedly asked Al-Bishara, to drop the knife, according to the police report. “Her demeanor was calm, even when we had our guns out,” an officer noted in the police report.

Officers began making hand gestures to indicate dropping a knife, but the woman still did not comply, the report states.

Etheridge told CNN affiliate WTVC that he took a knife from his pocket, showed it to Al-Bishara, and “threw my knife down on the ground, trying to make her understand what we wanted her to do.”

At that point, Al-Bishara began to walk toward the group and did not react when one of the officers turned on his Taser, according to the police report.

“The female did not react to the Taser being on, or the white light coming from the end of the Taser,” the reporting officer noted.

When Al-Bishara was approximately five yards away, still holding the knife in her hand, the officer fired his Taser and struck her in the chest, according to police. Officers then helped her to her feet, and placed her in handcuffs.

Officers tased Al-Bishara just across the street from her house while she was on property belonging to the Boys and Girls Club, according to CNN affiliate WTVC.

Another woman who then arrived on the scene identified herself as Al-Bishara’s daughter-in-law. She said that the older woman typically wanders into the woods looking for dandelions and collects them using a knife, according to the police report.

The daughter-in-law also said Al-Bishara has dementia and speaks Arabic.

The Taser pointed at Etheridge and unholstered firearm should have been indication of what wanted Al-Bishara to do, according to the police chief.

“Most people, that’s kind of the universal command for ‘stop,’ ” Etheridge said.

‘My grandma did not look violent’

Al-Bishara, a Syrian native, usually puts the dandelions in a salad she often makes for her husband, according to WTVC. Family members said the recipe is common in her culture, the station reported.

But the dandelions were not blooming in her yard and they couldn’t find any in the store, her granddaugther, Martha Douhne, told the station.

So, Al-Bishara crossed the street, headed for the vacant lot, where she had picked dandelions before, according to WTVC.

Douhne said her grandmother didn’t understand what police wanted her to do, and police shouldn’t have used a Taser on her.

“Obviously, my grandma did not look violent,” Douhne told WTVC. “With the three, four officers that were here, I think they could have controlled her in other ways.”