Genoa collapse: ‘Thousands’ of other bridges in Italy may be at risk, experts warn 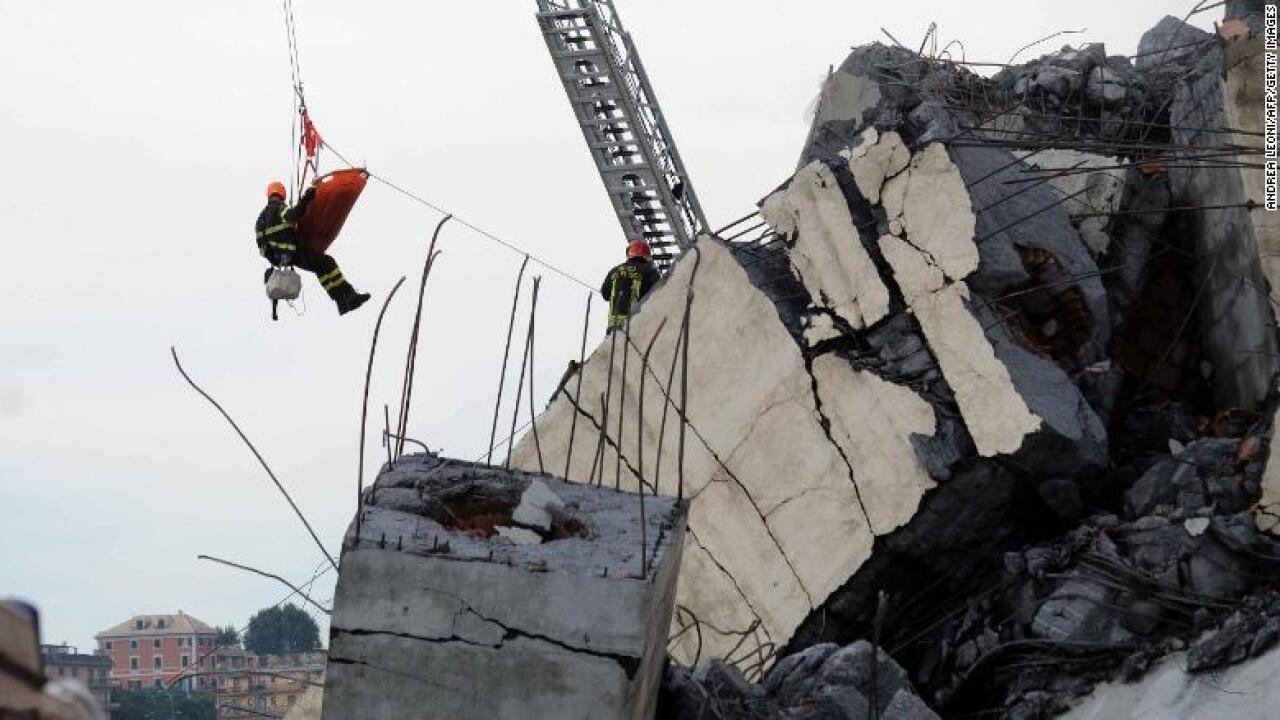 Rescuers are at work amid the rubble and wreckage of the Morandi motorway bridge after a section collapsed earlier in Genoa on August 14, 2018. – At least 30 people were killed on August 14 when the giant motorway bridge collapsed in Genoa in northwestern Italy. The collapse, which saw a vast stretch of the A10 freeway tumble on to railway lines in the northern port city, was the deadliest bridge failure in Italy for years, and the country’s deputy […]

Unknown numbers of people were still missing two days after a highway bridge in northern Italy gave way, authorities said, as experts warned Thursday that thousands of other bridges in Italy could be at risk of collapse.

The number of cars on the collapsed section of the bridge — and the number of people that were in them — is still unclear to those working on the ground, Chief of Fire Services Emmanuel Gissi told CNN.

“We also don’t know the capacity of each car,” Gissi said. “There could be one person or five. The only way to find out is to break the concrete, remove it, and then send in the dogs.”

Thirty-nine fatalities have been confirmed so far, but authorities continue to warn that the death toll may rise. Prime Minister Giuseppe Conte announced a 12-month state of emergency for the city of Genoa on Wednesday night and pledged five million euros to tackle the immediate costs of the search-and-rescue efforts.

Those efforts were continuing at the rescue site Thursday, where several cranes — dwarfed by towering blocks of concrete debris — were seen sifting through chunks of rubble.

‘Hundreds or thousands’ of bridges at risk

Experts are now warning that the collapse of the Morandi Bridge — a vital link of the A10 highway that connects northwest Italy to France and one of the busiest bridges in Italy — is a sign of far more serious failings in the maintenance of bridges across the country.

“All Italian bridges made of concrete between the 1950s and 1960s have come to the end of their life,” Settimo Martinello, director of 4EMME Service, a company that carries out inspections and checks on the state of 50,000 bridges in Italy, told CNN Thursday. “They’re not eternal.”

“There are hundreds, thousands rather, of bridges at risk of collapse,” he said, adding that the exact number is unknown and that the biggest problem is a lack of information about the 1.5 million or so bridges in Italy.

The responsibility for maintaining those bridges is split between local administrations and several private and public bodies — including Autostrade, which had the contract for maintenance on the A10 motorway — and only around 60,000 are monitored regularly, Martinello said.

“While a collapse like the one in Genoa is quite rare, there are about 15 to 20 bridges collapsing every year in the country,” he said.

Martinello’s warnings echoed a statement released Tuesday by Antonio Occhiuzzi, director of the Institute of Technology of Constructions at the CNR (National Council of Research), Italy’s biggest public research body.

“In practice, tens of thousands of bridges in Italy have exceeded, today, the lifespan for which they were designed and built, according to a balance between costs and needs of national reconstruction after World War II and the durability of the works,” Occhiuzzi said.

He called for many Italian bridges to be replaced with structures with a lifespan of 100 years, saying that the costs of the “extraordinary maintenance” required to keep existing bridges functional would in many cases exceed those involved with demolition and reconstruction.

Leading politicians have blamed Autostrade for the Genoa disaster. Conte announced Wednesday that his government would revoke the concession from the company, while Transport Minister Danilo Toninelli has called for senior managers there to resign. Shares in Autostrade were down 24% Thursday.

Stefano Marigliani, a senior executive at Autostrade in charge of the part of the toll road network linking the French and Italian Rivieras that includes the bridge, told the Financial Times that the structure “was monitored constantly beyond legal requirements” and that there was “no reason to consider it dangerous.”

Soon after the incident, it emerged that locals and experts had been warning about the state of the bridge for years.

Antonio Brencich of the engineering faculty at the University of Genoa sounded the alarm in 2016, calling the structure an “engineering failure” in an interview with broadcaster Primocanale.