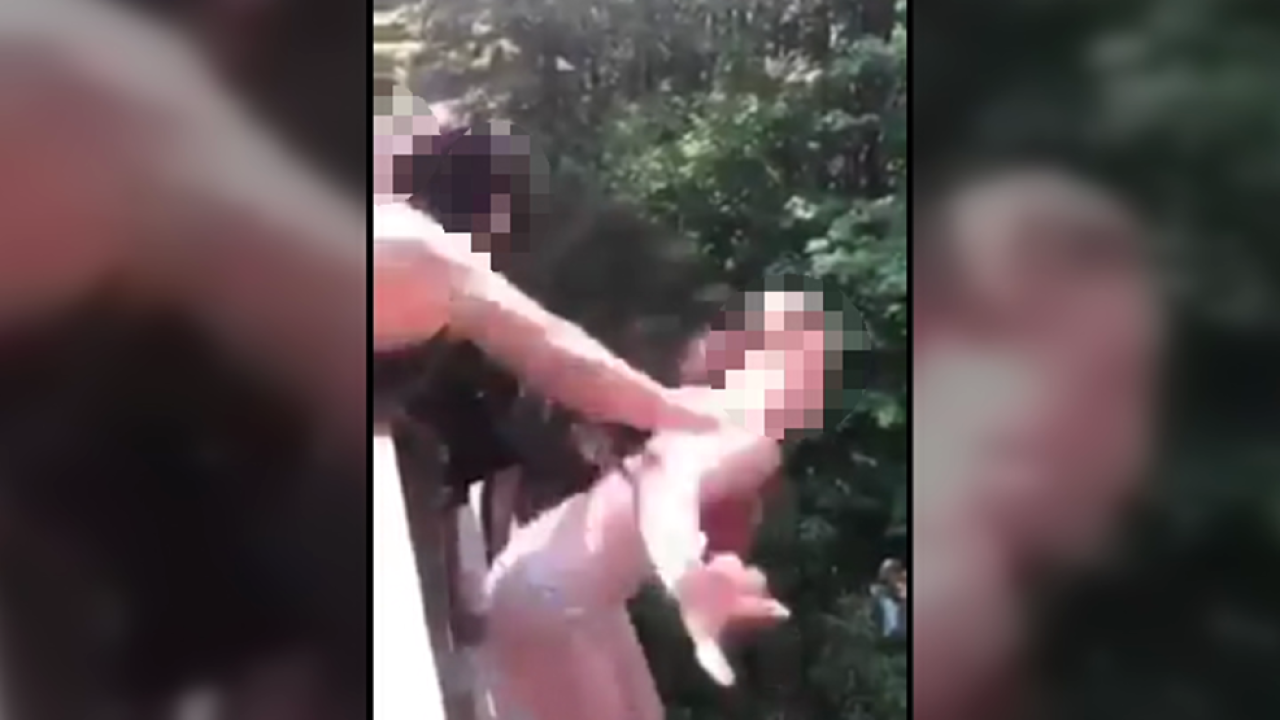 YACOLT, Wash. -- A cell phone video showing a teen being pushed off a high bridge above the Lewis River is making a stir, as the teen recovers from injuries in a Vancouver hospital.

The Yacolt Fire Department confirmed that medics responded to Moulton Falls Regional Park Tuesday afternoon on reports that a teen girl was hurt after going over the popular pedestrian bridge.

First responders told KPTV the girl was out of the water when they arrived and she was alert and conscious when she was taken to the hospital by ambulance.

The teen’s step-grandfather, Alex Jessen, told KPTV that she broke five ribs in the fall. Jessen also wrote on Facebook that the push could’ve killed her. He and several other community members online expressed a desire that the person responsible for the push be held accountable.

The video shows a girl standing on a ledge over the railing while surrounded by a group of people. One person is heard yelling a countdown, and when the teen doesn’t jump, another person is seen pushing her off the bridge – her arms flail out as she appears to fall toward the water torso-first.

Tanner Peterson was jumping off the same bridge Wednesday evening. He said he saw the video of the teen falling off the bridge on YouTube, and decided to visit the park for the first time, just to jump.

“She face-planted that, her pusher just threw her whole upper body off and that would be the scariest five seconds of her life,” Peterson said. “If that was someone I knew, I’d be really upset with the person who pushed them.”

Despite signs warning people not to dive or jump of the bridge, several others jumped off Wednesday evening.

Peterson said he wasn’t worried about the water or his jumping technique, but believes a push off the bridge should be a crime.

“You hit wrong and it’s like hitting concrete,” Peterson said. “You could die, easy. If your head hits and your neck breaks, you’re going to die.”

Firefighters said the jump is dangerous, not recommended, and the injuries at the bridge are stacking up. Officials said medics have responded to four cases this summer alone – a new record.

They rescued a man who lost consciousness after making the jump a couple of weeks ago.

“Someone pulled him out of the water, and just right under the bridge, and put him on a rock that’s pretty even,” Edgar Ruesga said. “He was out, he was unconscious.”

As for the teenage girl, officials at PeaceHealth Southwest Medical Center said she is in stable condition.

The Clark County Sheriff’s Office told KPTV that the case is being investigated and several witnesses have been contacted.