Fantasy Football Chief: 5 players poised to benefit from their playcaller 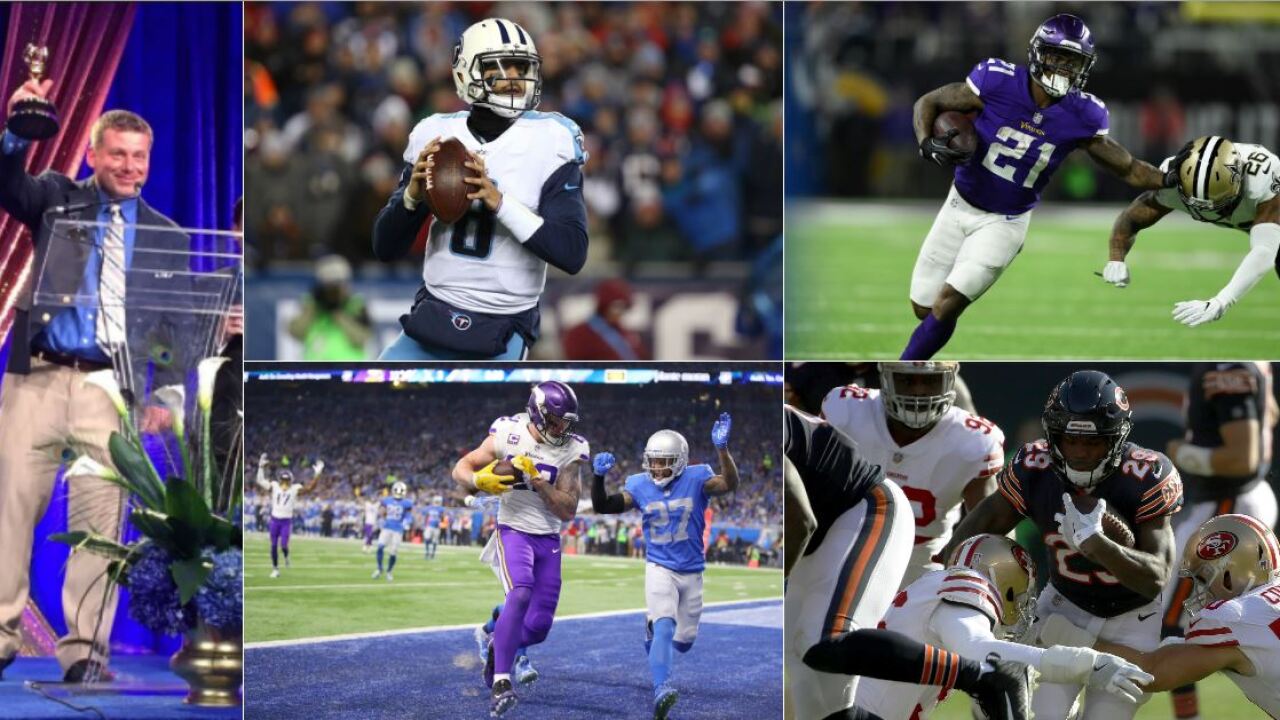 RICHMOND, Va. — Want to bring your fantasy football success to a higher level? Look no further than the playcaller.

Anyone who had Todd Gurley on their roster last year knows he produced abundant fantasy points. He led the NFL with 2,093 total yards (rushing and receiving) and 19 touchdowns. The year before, he had just 1,212 yards with six touchdowns.

Gurley’s ADP (average draft position) last year was around #23 overall. This year he is routinely the top player selected in fantasy drafts. Okay, we know he’s great, but who else?

Five players who will be helped by their new play callers

Most people know that Barkley is a stud. He was drafted #2 overall by the New York Giants, but is he worth a selection in the mid-first round of your fantasy draft?

Pat Shurmer is the new Giants’ head coach and will serve as the playcaller. Shurmer was the offensive coordinator for the Minnesota Vikings last year, where he featured Dalvin Cook as his lead runner. Prior to his season ending injury in Week 4, Cook had 444 total yards with two touchdowns and 11 catches. Cook was well on his way to posting elite fantasy numbers.

With Odell Beckham on the outside, Barkley will likely not face any stacked boxes on defense. The Giants landed left tackle Nate Solder in free agency and guard Will Hernandez in the 2018 draft, which will help pave paths for Barkley.

Barkley does have a noticeable flaw. He has a tendency to bounce runs to the outside, often trying to reach pay dirt on every play rather then using his 233-pound frame to pick up tough yards. Barkley is a quick study, however, and should learn that bouncing too many plays will result in a lot of negative runs.

The verdict: Barkley is worth a pick in the first round somewhere between spots seven and ten. Don’t expect to see him fall to the second round. If he does, pounce!

Blessed to be a member of the @Giants! Thank you for believing in me. You won't be disappointed. I'm ready to work! Already got my #NFLDraft card on #PaniniInstant. Check it out! https://t.co/IYvU7RTqjc pic.twitter.com/HrsRWGkfAu

***Note McKinnon was injured in the preseason and will miss the 2018 season.

McKinnon was hand picked by Kyle Shanahan to be the new lead back with the San Francisco 49ers. By the value of his four-year contract worth $30 million, you can be assured he receives every opportunity to succeed in Shanahan’s running back friendly offense.

McKinnon had played second fiddle to backs like Adrian Peterson and Dalvin Cook during most of his five-year career with the Vikings. He has had opportunities to be a starter when the aforementioned players were unavailable, but found himself splitting touches with backs like Matt Asiata and Latavius Murray.

Shanahan has led numerous backs to fantasy success including Alfred Morris’ rookie season with the Washington Redskins when he rushed for 1,613 yards with 13 touchdowns. He was offensive coordinator for the Atlanta Falcons in 2015 and 2016 during Devonta Freeman’s most successful seasons.

Shanahan cast Hyde aside in favor of McKinnon, who he sees as a versatile three-down back. Expect Shanahan’s creativity to allow McKinnon to catch the ball in space and find wide open running lanes.

McKinnon, 5-foot-9, 205 pounds, may have difficulty being a bell cow back, but he will be given between 15 to 20 touches per game allowing him to be a top end RB2 if he can stay healthy.

The verdict: His late second round ADP is a bit pricey, but if he somehow falls to the third round then you will be in great shape.

Jerick McKinnon #21 of the Minnesota Vikings carries the ball and stiff arms defender P.J. Williams #26 of the New Orleans Saints in the fourth quarter of the NFC Divisional Playoff game on January 14, 2018 at U.S. Bank Stadium in Minneapolis, Minnesota. (Photo by Hannah Foslien/Getty Images)

Cohen burst onto the scene last season catching 24 balls for 151 yards and a touchdown with the Chicago Bears in his first four games. He also carried 30 times for 181 yards.

His early season success diminished quickly after defenses keyed on him due to the Bears lack of elite playmakers. Chicago has a revamped offense this season under new head coach Matt Nagy.

Nagy was the offensive coordinator for the Kansas City Chiefs last season where he assumed play-calling duties from head coach Andy Reid midseason. You may remember about four games last year when rookie running back Kareem Hunt disappeared statistically. After that, Reid essentially benched himself as play caller handing the job to Nagy, who quickly got Hunt back on track.

As a Reid disciple, Nagy will look to feature running backs and tight ends in this offense. There is no clear cut three-down back in Chicago like Hunt is for the Chiefs, so Cohen and Jordan Howard will split touches.

Howard does not have good hands dropping 14 catchable balls in his first two pro seasons. Howard has been working this offseason to correct the issue, but we’ll see if he can improve hand-eye coordination and hand placement that quickly.

Cohen is a natural catcher and silky smooth in his routes. He is dangerous in space and Nagy has compared him to Tyreek Hill, the versatile receiver he coached with the Chiefs. Expect Cohen to get about 12-15 touches per game, an increase from his roughly nine or ten per game last year. They will be much more productive touches in Nagy’s creative system as opposed to the vanilla system that was run by John Fox’s staff last season.

The Verdict: Cohen is worth a pick as your third running back or flex option in PPR leagues. You should feel comfortable targeting him at his late sixth, early seventh round ADP. He is much more affordable then Howard who will cost you a late second, early third round pick. You should note that Cohen is not as preferable in standard leagues as he will be used more as a high volume pass catching back.

Tarik Cohen #29 of the Chicago Bears carries the football against the San Francisco 49ers in the first quarter at Soldier Field on December 3, 2017 in Chicago, Illinois. (Photo by Jonathan Daniel/Getty Images)

Rudolph’s last two seasons have been the best of his five-year career with the Minnesota Vikings. He’s caught 150 balls for 1,472 yards with 15 touchdowns during that span. His first two seasons were marred by injury, but he has now played all 16 games in three straight seasons.

John DeFilippo is the new offensive coordinator for the Vikings. He has been a quarterbacks coach for the majority of his 11-year career in the NFL, including the last two seasons with the Philadelphia Eagles.

You may be wondering, how is a quarterback’s coach going to benefit the fantasy value of a tight end? When you dig deeper you will see that DeFilippo’s career has mirrored success of tight ends around the league.

DeFilippo was quarterbacks coach during Gary Barnidge’s best season with the Cleveland Brown’s in 2015 when he caught 79 balls for 1,043 yards and nine touchdowns. DeFilippo left for the Eagles the next season and Barnidge’s career faded.

With the Eagles, DeFilippo helped elevate Zack Ertz’s career and launched that of Trey Burton. Ertz’s best two seasons came with DeFilippo at the helm catching a combined 152 passes for 1,640 yards with 12 touchdowns. Meanwhile, Burton had caught three passes in his first two seasons, but under DeFilippo he totaled 60 catches 575 yards and 6 touchdowns in his next two seasons.

In addition, Vikings quarterback Kirk Cousins was quoted as saying, “Boy he’s a friendly target. It’s like throwing into a mattress,” according to WCCO in Minnesota.

The Verdict: Feel at ease drafting Rudolph as your starting tight end in the seventh round. He should go off the board around the same time as Tennessee tight end Delanie Walker.

Kyle Rudolph #82 of the Minnesota Vikings catches a pass against Glover Quin #27 of the Detroit Lions for a touchdown during the second quarter at Ford Field on November 23, 2017 in Detroit, Michigan. (Photo by Gregory Shamus/Getty Images)

Mariota has been inconsistent in his first three seasons with the Tennessee Titans. His best season came in 2016 when he threw 26 touchdowns to go with nine interceptions. However, last season he regressed to 13 TD passes and 15 interceptions. The constant with Mariota is his running ability rushing for nine scores during his career.

Matt LeFluer is the new offensive coordinator for the Titans, good news for Mariota because LaFluer has helped Jared Goff, Matt Ryan, Robert Griffin III and Matt Schaub to their best seasons.

LeFluer was the offensive coordinator of the Los Angeles Rams last season, guiding Goff to hefty production, including 28 touchdowns and just seven interceptions to go with 3,804 passing yards and a 100.5 QB rating. That was up from his 63.6 QB rating as a rookie.

Ryan’s MVP season came when LaFluer was his quarterbacks coach in 2016. His 38 touchdowns were a career high and his seven interceptions, a career low.

Griffin III’s first two seasons were under LaFluer, the only two where he surpassed 3,000 passing yards and had a positive touchdown to interception ratio.

Marcus Mariota #8 of the Tennessee Titans looks to throw in the first quarter of the AFC Divisional Playoff game against the New England Patriots at Gillette Stadium on January 13, 2018 in Foxborough, Massachusetts. (Photo by Adam Glanzman/Getty Images)

The Verdict: Mariota is poised for his best season to date. If there is ever a year to wait on drafting quarterbacks, this is it. You can currently draft Mariota as the 17th quarterback off the board in rounds 10 or 11 in a 12-team league, but he should post QB1 numbers. If you do draft Mariota you would be wise to hedge your bet with another QB such as Jared Goff or Alex Smith, who are going off the board around the same area as Mariota. I’d much rather be drafting QB’s somewhere between rounds 10 to 14, and save my early round picks for RB’s and WR’s who are much more scarce then the QB position.

Brad Wilson is the Chief Photojournalist at CBS 6 News. He has a decorated career, winning 10 Emmy awards for his work.

But, that’s not the only hardware that sits atop his mantle.

In the past three years, Wilson competed in eight leagues winning four of them, finishing in the top three in six and making the playoffs in all.

WTVR.com has called upon Wilson to bring its fans some unique insight into fantasy football. Look for his Fantasy Football Chief columns to drop every Tuesday through the football season. Click here to ask him your fantasy football questions.