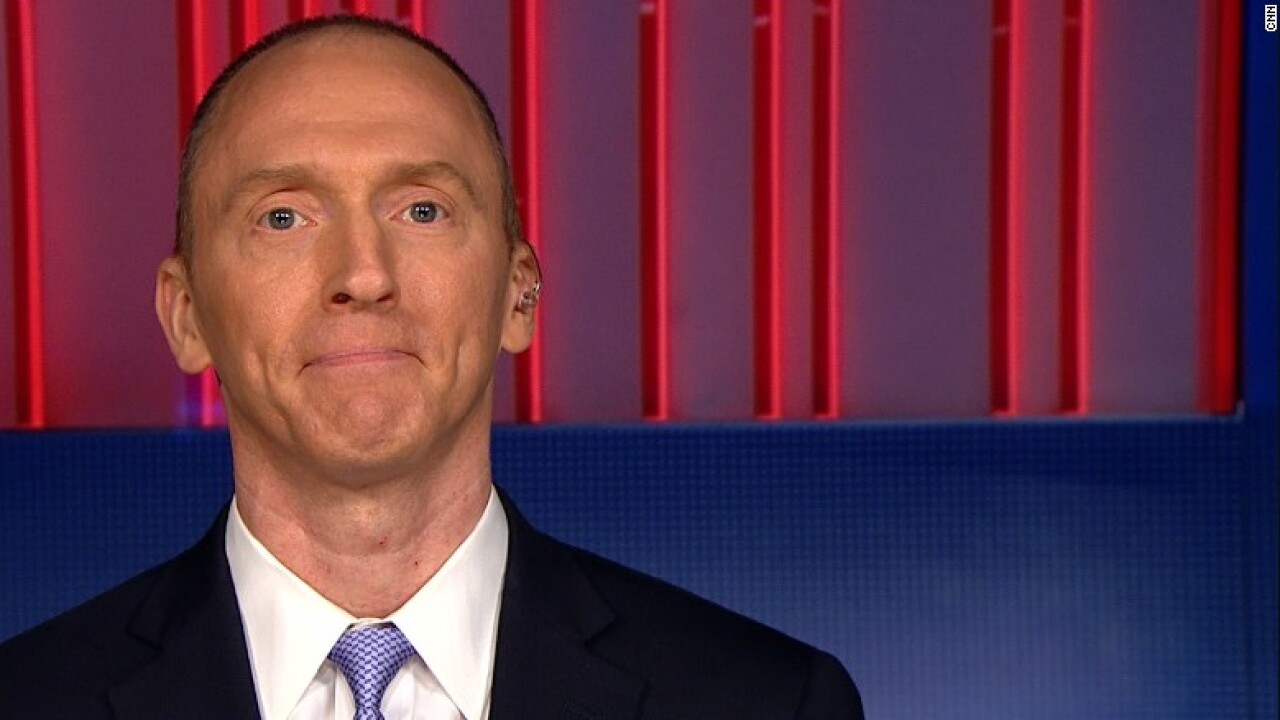 Carter Page on Sunday called the accusations against him detailed in the foreign surveillance warrant application released by the FBI “so ridiculous.”

“You talk about misleading the courts, it’s just so misleading,” Page said about the warrant application in an interview on CNN’s “State of the Union with Jake Tapper.”

On Saturday, the FBI released a redacted version of the warrant application on Page, a Trump campaign foreign policy adviser, after news organizations and advocacy groups sued for its disclosure.

The release of the document is noteworthy as it marks the first public disclosure of a highly sensitive FISA request. Information included in the request had been largely reported through two declassified memos released separately by Republicans and Democrats on the House Intelligence Committee, but Saturday’s disclosure put the FBI’s own argument in black and white for the first time.

President Donald Trump on Sunday also accused the Justice Department and the FBI of misleading the courts, following the release of a previously classified foreign surveillance warrant application.

Trump wrote in a Sunday morning tweet that the FISA documents “confirm with little doubt,” that the Justice Department and FBI “misled the courts,” despite the fact that the document itself acted as legal justification for the FBI to obtain the 2016 warrant.

“Congratulations to @JudicialWatch and @TomFitton on being successful in getting the Carter Page FISA documents,” Trump wrote. “As usual they are ridiculously heavily redacted but confirm with little doubt that the Department of ‘Justice’ and FBI misled the courts. Witch Hunt Rigged, a Scam!”

Trump went on to allege in a second tweet that his campaign was potentially being “illegally” surveilled for “the political gain of Crooked Hillary Clinton and the DNC.”

“Looking more & more like the Trump Campaign for President was illegally being spied upon (surveillance) for the political gain of Crooked Hillary Clinton and the DNC. Ask her how that worked out – she did better with Crazy Bernie. Republicans must get tough now. An illegal Scam!” Trump’s follow up tweet on Sunday morning said.

The warrant has been a major point of contention between Republicans and Democrats. Republicans have charged that it’s evidence of a pattern of abuse by the Justice Department and the FBI targeting the Trump campaign. They also say the warrant is tainted — based on the opposition research dossier on Trump and Russia that was paid for by Democrats — and that because the FISA warrant helped launch the FBI investigation into Trump and Russia, the whole investigation is tainted.

Democrats, however, say the FISA warrant on Page was justified because of his contacts with Russia, and they argue that the FBI and Justice Department followed proper procedure in seeking and getting the Foreign Intelligence Surveillance Court to approve the warrant.

Democrats also argue the FBI’s interest in Page predated its knowledge of the opposition research dossier and say it was not the dossier and the Page FISA warrant that prompted the FBI’s counterintelligence investigation into Russia, but rather an earlier conversation that former Trump campaign adviser George Papadopoulos had with an Australian diplomat about alleged Russian dirt on Clinton.

The document released Saturday, which is more than 400 pages and includes the initial October 2016 FISA warrant on Page as well as three subsequent renewals, says that the FBI “believes Page has been the subject of targeted recruitment by the Russian government.”

“The FBI believes that Page has been collaborating and conspiring with the Russian government,” the application states, adding that “there is probable cause that such activities involve or are about to involve violations of the criminal statutes of the United States.”

Page on Sunday denied claims that he worked for the Kremlin, and called accusations that he had advised Moscow “spin.”

“No, I’ve never been an agent of a foreign power by any stretch of the imagination,” he said. “I may have, back in the G20 when they were getting ready to do that in St. Petersburg, I might have participated in a few meetings that a lot of people — including people from the Obama administration — were sitting on, and Geneva, Paris, et cetera, but I’ve never been anywhere near what’s being described here.”

“Andrew McCarthy – ‘I said this could never happen. This is so bad that they should be looking at the judges who signed off on this stuff, not just the people who gave it. It is so bad it screams out at you.’ On the whole FISA scam which led to the rigged Mueller Witch Hunt!” Trump wrote.

Trump continued in another tweet: “.@PeteHegseth on @FoxNews ‘Source #1 was the (Fake) Dossier. Yes, the Dirty Dossier, paid for by Democrats as a hit piece against Trump, and looking for information that could discredit Candidate #1 Trump. Carter Page was just the foot to surveil the Trump campaign…’ ILLEGAL!”