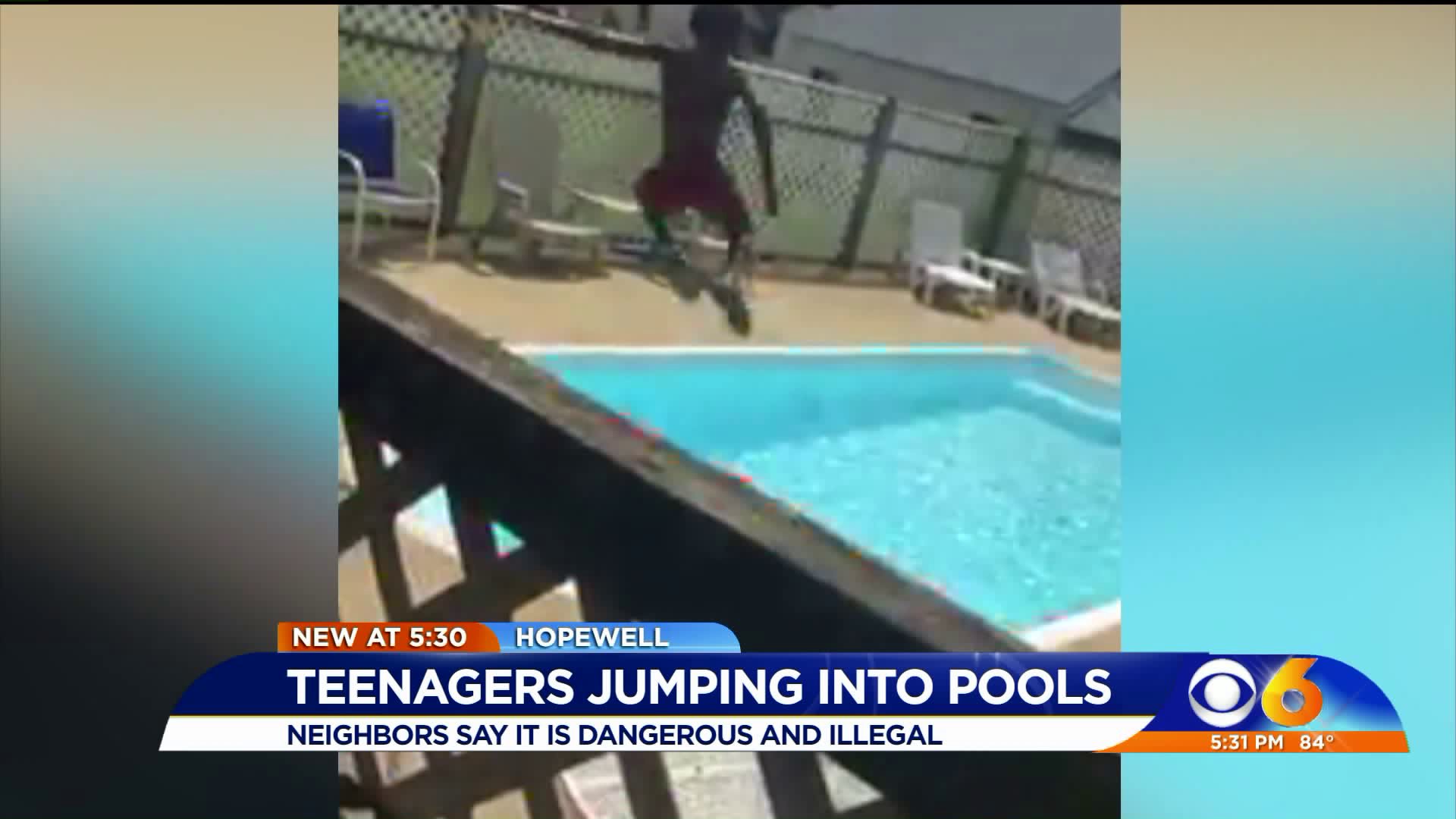 HOPEWELL, Va. -- Hurdling fences and jumping into pools could lead to serious trouble for some Hopewell teens. The concern among pool owners isn’t just the trespassing, but the chance one of the teens could end up injured -- or even dead.

“Kids shouldn’t be going around the neighborhood jumping in people’s pools, tearing them, they could get hurt,” said Tracy Acord, whose pool was one of the first targeted by the teens.

Not all pool owners were aware of the incident until videos posted by the teens surfaced Wednesday on Facebook. The videos appear to be shot on two different days and the pools targeted are within about a mile of each other. In total, at least seven different pools appear to have been used in the pranks.

Video posted to social media shows a teen jumping into a pool.

Tracy Acord, whose pool ranges from 4 to 5 feet in depth, expressed his concern as he watched the video of the teens in his pool.

“That is very dangerous, because he does a back flip in the pool. He could have hit his head on the bottom and broke his neck," Acord said.

“You have no clue what you’re going into” when jumping into these pools, warned John Mazza, who owns Medallion Pools.

“An above-ground pool can be 48 inches or 52 inches deep, but that’s not the water depth. The water depth is six inches less than that. You dive into that, you’re asking for serious injury or death, whether jumping or diving,” Mazza said.

Despite fences and no trespassing signs, owners fear they could possibly face lawsuits if one of the teens gets injured.

“Well there’d be all sorts of lawsuits involved [if they were injured], plus you know I don’t want any kids hurt,” said concerned pool owner Leamon Cox, whose pool was targeted by the teens.

Mazza, along with pool owners, fear the teens effort at a viral video could quickly turn into something serious if they continue trying to spread their trend on social media.

“If they keep it up, they will either kill themselves or end up in a wheelchair for the rest of their lives,” Mazza said. “It’s insane. It’s absolutely insane.”

Hopewell Police are aware of the videos and said they have received several messages via Facebook. However, they will need the owners who had their pools targeted by the teens to file a police report in order to investigate and determine if charges will be filed against the teens.