These Richmond IPAs were named among best in the nation 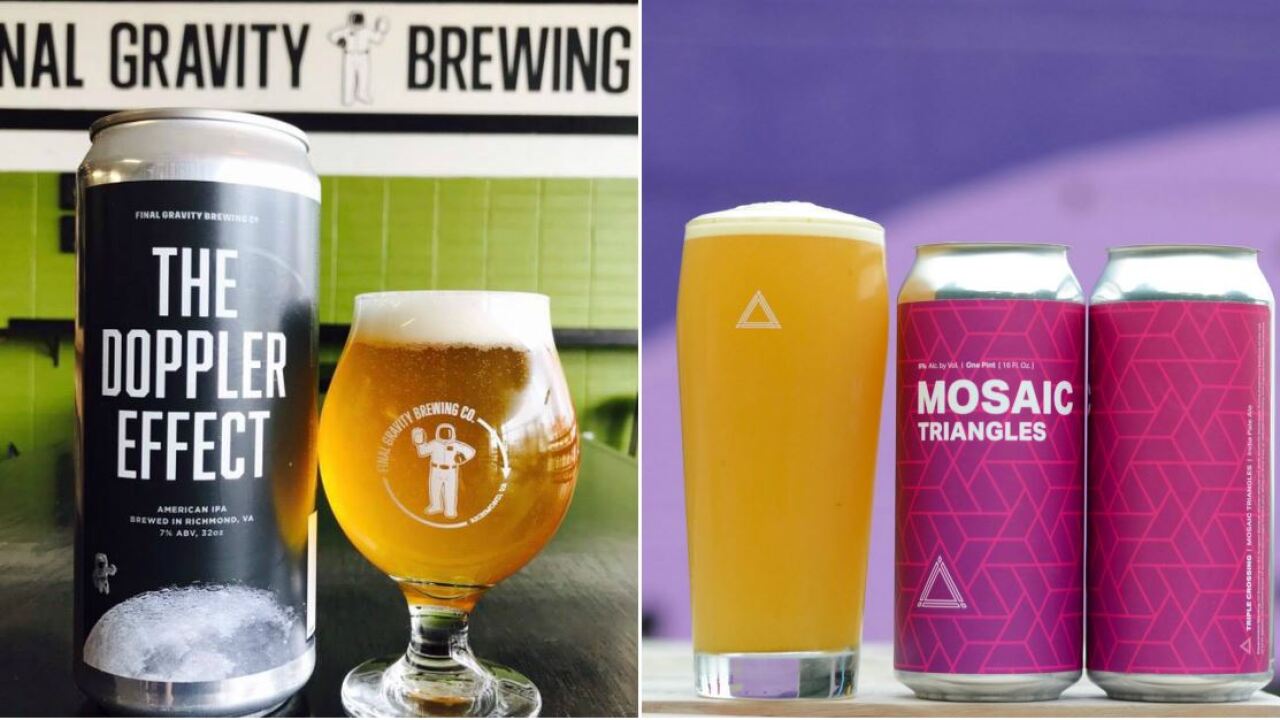 RICHMOND, Va. — Paste — a music, film, food (general lifestyle) website — has named three Richmond IPAs among the best in the nation. You better get to Final Gravity and Triple Crossing now — these beers aren’t going to be around for long. Final Gravity Brewing Co.’s The Doppler Effect was ranked the 12th best IPA in the nation. The Richmond brewery’s Sunspots came in at #43.

Paste conducted the “largest blind tasting” of IPAs in its history (as a magazine) and decided three Richmond IPAs the bast they’ve ever had. They started blind testing in 2015 and have done so three more times. This test included 347 entrees.

From Paste: “Every time we do this, it seems like the previous mark will be impossible to surpass. Each time, we’re wrong.”

Referencing their blind tasting: “the vast majority of these IPAs were sent directly to the office by the breweries that choose to participate, with additional beers acquired by us via locally available purchases and the occasional trade. We always do our best to reach out to breweries we’re aware of that make exemplary versions of particular styles, but things always do slip through the cracks.”

You can read the full article here, or scroll down to read what Paste said about the Richmond beers.

The verdict: But really—what’s going on in Richmond, Virginia in terms of its absolute wealth of killer IPA breweries? How did so many of them end up in a city that barely scrapes into the 100 largest in the U.S.A.? We don’t know the answer to that question, but we do know that Final Gravity’s The Doppler Effect is yet another superlative NE-IPA from a town that is absolutely full of them. This one hits with BIG citrus hop aromatics, giving it one of the best noses of all the finalists—lemon, grapefruit and orange are all well represented. From one score sheet: “Perfumey, bright lemon and grapefruit, really crisp for a hazy IPA.” From another: “Massive citrus and tropical fruity nose, into big resin, spicy.” This is a beer that has already won a couple of blind tasting awards among Richmond IPA’s, and we can see why. Even in a particularly crowded, particularly brilliant marketplace, Final Gravity has found a way to stand out.

The verdict: It’s safe to say that Triple Crossing opened some eyes and made lifelong fans among the Paste staff when not one but two of their beers ended up in the top 5 of our blind tasting of 176 DIPAs. It was one of the most impressive single performances in any Paste blind tasting, and made it only more clear that Richmond, VA is home to some of the best hoppy breweries in the world. For single IPA, Triple Crossing turned to two variations of their intensely dry-hopped “Triangles” series, and although we enjoyed the Citra version, it was the Mosaic Triangles that really spoke to us. As in a few other Mosaic beers in this tasting, it was the greener, danker side of the hop varietal that emerged—or perhaps that was just a factor of what seemed like an outrageous amount of hops. Regardless, this one hits on the nose with a big, perfumey burst of resin, pine needles, grass and grapefruit. Intensely hoppy, with a nose that is immediately distinct, it inspired one taster to write “Woah, huge hops, intensely grassy but actually in a good way.” Another taster in the finals picked up more on the fruity side of the beer, writing the following: “Peach into pineapple into green papaya.” Regardless, there’s no lack of character in this one.

The verdict: Final Gravity isn’t a brewery that any of us at Paste had sampled before, but after seeing their overall performance in this tasting, we’re all the more amazed by the sheer glut of amazing IPA breweries in Richmond—to have Triple Crossing, The Veil, The Answer, Final Gravity and even good ‘ole Stone in one city is nothing short of amazing, and that’s still leaving out plenty of others. Sunspots is hazy, but on the more subtle side of the spectrum, with citrus juiciness that is restrained and almost balanced by light maltiness that carries an unexpectedly toasted, slightly bready quality. Multiple tasters praised its easy-drinking demeanor, while one in particular was effusive: “Juicy, complex and well-made. Love everything about this.”