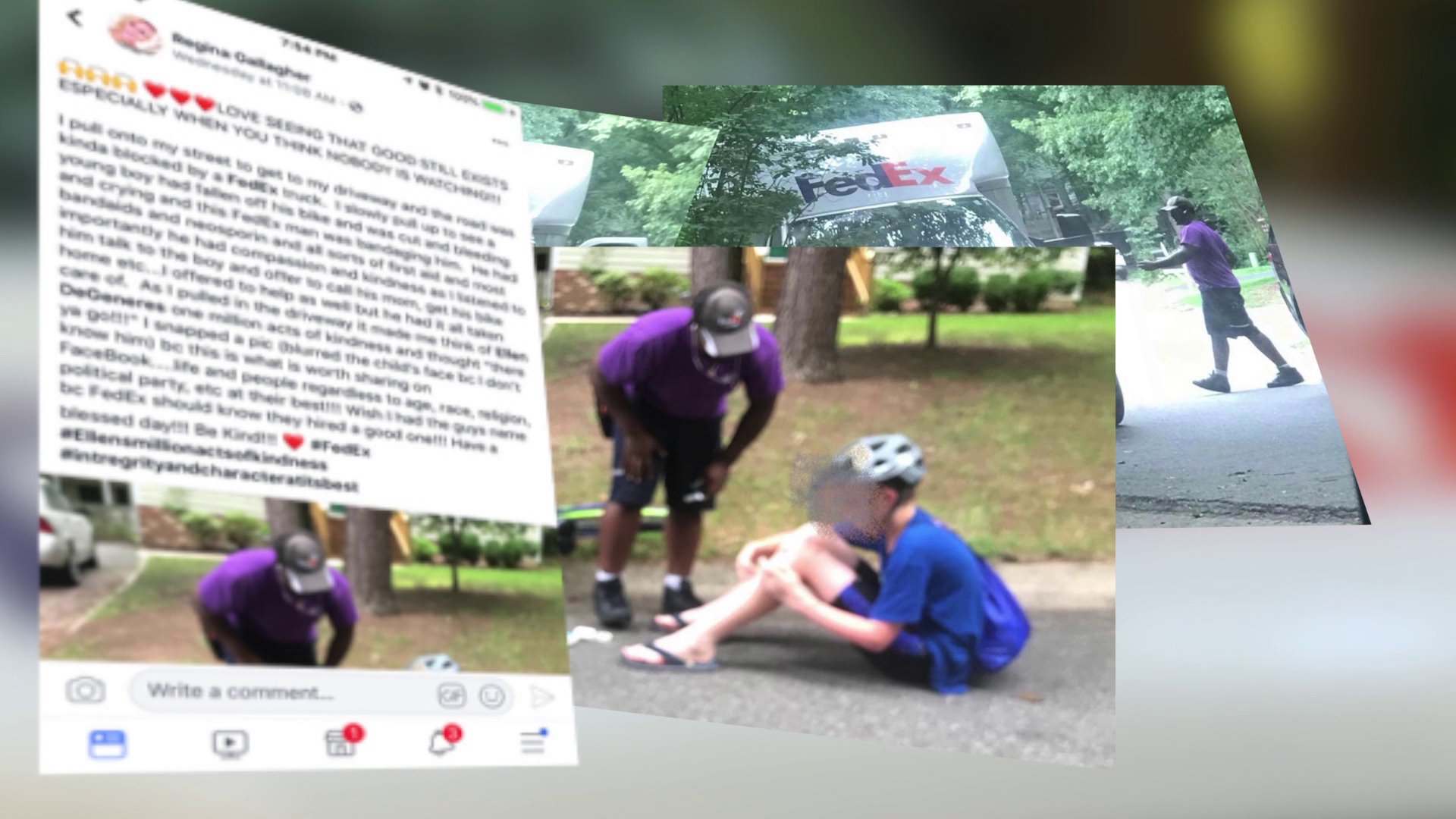 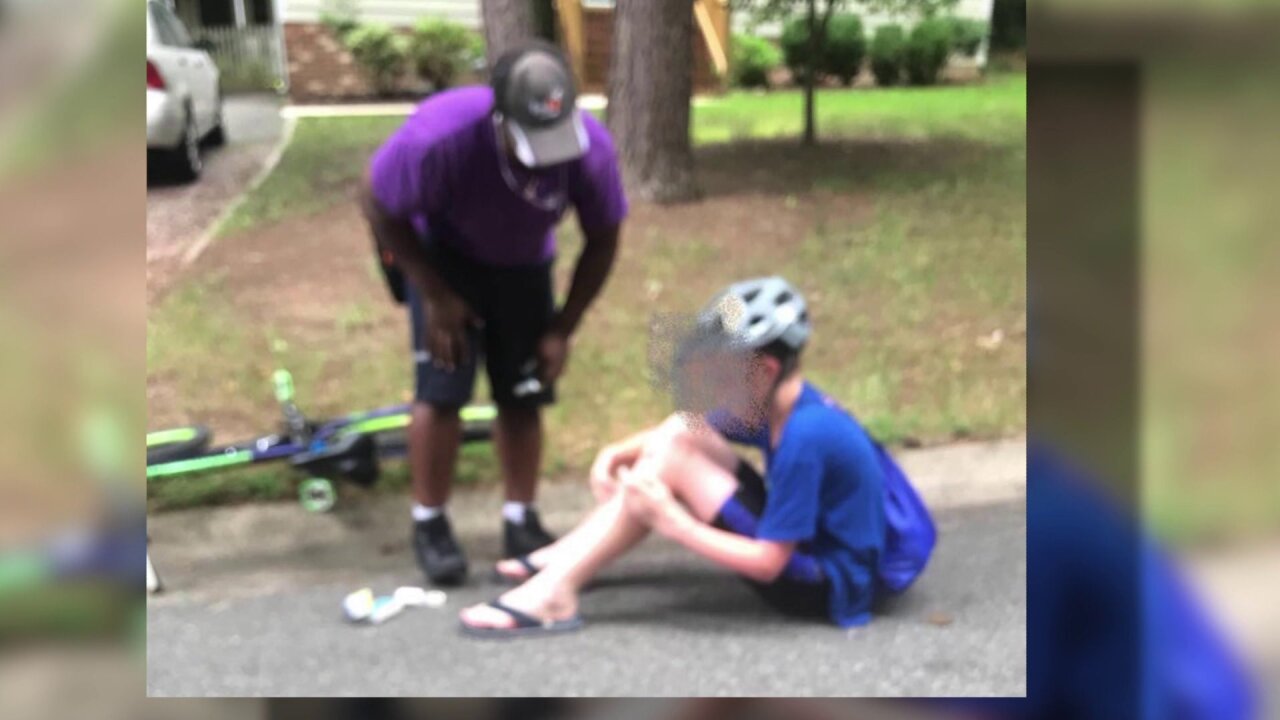 CHESTERFIELD COUNTY, Va. -- A contracted FedEx driver is being praised for what he delivered last week and it had nothing to do with a package.

“I thought, something is not right, so I kind of creeped up slowly,” explained Midlothian resident Regina Gallagher.

Gallagher pulled into her Woodlake subdivision where she saw a FedEx truck on the side of the road with the door wide open and a child injured next to his bike.

“I watched in slow motion just watching him meticulously and compassionately help a child who was bleeding,” she said.

Gallagher didn’t know who the FedEx man was but she was so impressed how he handled the situation she snapped a few pictures and posted it to her Facebook page.

I pull onto my street to get to my driveway and the road was kinda blocked by a FedEx truck. I slowly pull up to see a young boy had fallen off his bike and was cut and bleeding and crying and this FedEx man was bandaging him. He had bandaids and neosporin and all sorts of first aid and most importantly he had compassion and kindness as I listened to him talk to the boy and offer to call his mom, get his bike home etc...I offered to help as well but he had it all taken care of. As I pulled in the driveway it made me think of Ellen DeGeneres one million acts of kindness and thought “there ya go!!!” I snapped a pic (blurred the child’s face bc I don’t know him) bc this is what is worth sharing on FaceBook....life and people regardless to age, race, religion, political party, etc at their best!!! Wish I had the guys name bc FedEx should know they hired a good one!!! Have a blessed day!!! Be Kind!!! 2764.png❤ #FedEx #Ellensmillionactsofkindness #intregrityandcharacteratitsbest

WTVR reporter Laura French shared the post in hopes of locating the mystery good Samaritan and within 24 hours it was shared hundreds of times and viewed by more than 20,000 people.

“Once I got to work my manager was like, 'Hey, did you know the news lady shared you on her Facebook page?'” said FedEx driver Ronnie Taylor. “I’m like, 'What?'”

“I instantly called my girlfriend and was like 'Hey, the news lady Laura French shared me on her Facebook page,'" he added. "Oh my goodness. This is crazy."

“After I helped him out, I just went out about my day. I didn’t tell anyone that I helped someone that fell,” said Taylor. “I didn’t know anyone was watching or taking pictures.  I didn’t expect it to happen like this. It was just a normal act of me trying to help someone. I seen him in need and just wanted to make sure he was OK.”

“As a mom, it made me proud watching you,” Gallagher told Taylor. “It was just an act of kindness. I thought, wow this is nice to see. You were just being you.”

“I appreciate you putting that out there and allowing other people see who I am,” Taylor thanked Gallagher.

Taylor is employed by Legacy Transports, Inc., a FedEx contractor. He is also the father of a four-month-old daughter.

“If my daughter was somewhere away from home and she had fallen off her bike, and needed stitches or something like that, and people were just riding past, it would hurt me to think people would do that,” said Taylor. “I would definitely want someone to do the same for my daughter and I definitely believe in good karma."

Taylor said he was finishing his route the morning of June 27, when he saw the unidentified boy lose control of his bike.

“His front wheel wobbled and him and the bike kind of flipped over. It was pretty sad,” said Taylor. “He instantly started bleeding, so I just grabbed everything I had and jumped out the truck.”

“I watched in slow motion just watching him meticulously and compassionately help a child who was bleeding,” Regina Gallagher said.

“I told him, 'Hey, give me your hand.' And [I] put some Neosporin on his hand. He didn’t say a word. I could see it in his face he was hurting. His pride was hurt,  so just wanted to make him feel a little better by like, ‘You’re not that bad. Here just rub it up there,'" Taylor said "When I put the Neosporin on his finger I saw he was scared to touch his knee. I was like ‘Hey, it’s not going to burn.’ I grabbed his hand and rubbed it up there.”

“He was balled up when he was down [and] by the time I finished helping him, he was up and looking like he was himself again," Taylor said. "So that was pretty cool. As long as he wasn’t pouting when I left or acting like he was hurting.”

“It’s worth paying attention to people, and worth doing the right thing, and I hope it comes with benefits for him,” Gallagher said.

Taylor said his goal is to become a full time FedEx employee.

“I definitely would like to go with the main company, but I guess I just need to work my way there,” Taylor said.

“If FedEx is watching, someone needs to make a phone call and say son come on in and sign some papers we have a job with benefits,” Gallagher said.

“I just wanted to help and show him that someone will be there to pick you up if you fell,  regardless if they’re Asian, African, Hispanic -- it doesn’t matter,” Taylor said. “Say this young guy had a bad interaction with an African-American male, but then that day I came over and showed him compassion that may change his outlook on how he feel toward African-American people,” Taylor explained. “If we can all reach a hand out and help someone, the world would be a much better place.”

James O’Neill, who owns Legacy Transports, Inc.,  said he was thrilled to hear that one of his employees assisted a child in need.

“Ronnie Taylor is a driver that went the extra mile to help a boy who had fallen off his bike. He stopped and took the time to check on the boy and provide first aid assistance. We are proud that Ronnie is the type of person to look out for other members of the community while still doing his job," O’Neill said. "It is so nice to hear about good Samaritan acts and we hope to continue to provide exceptional service to our community.”