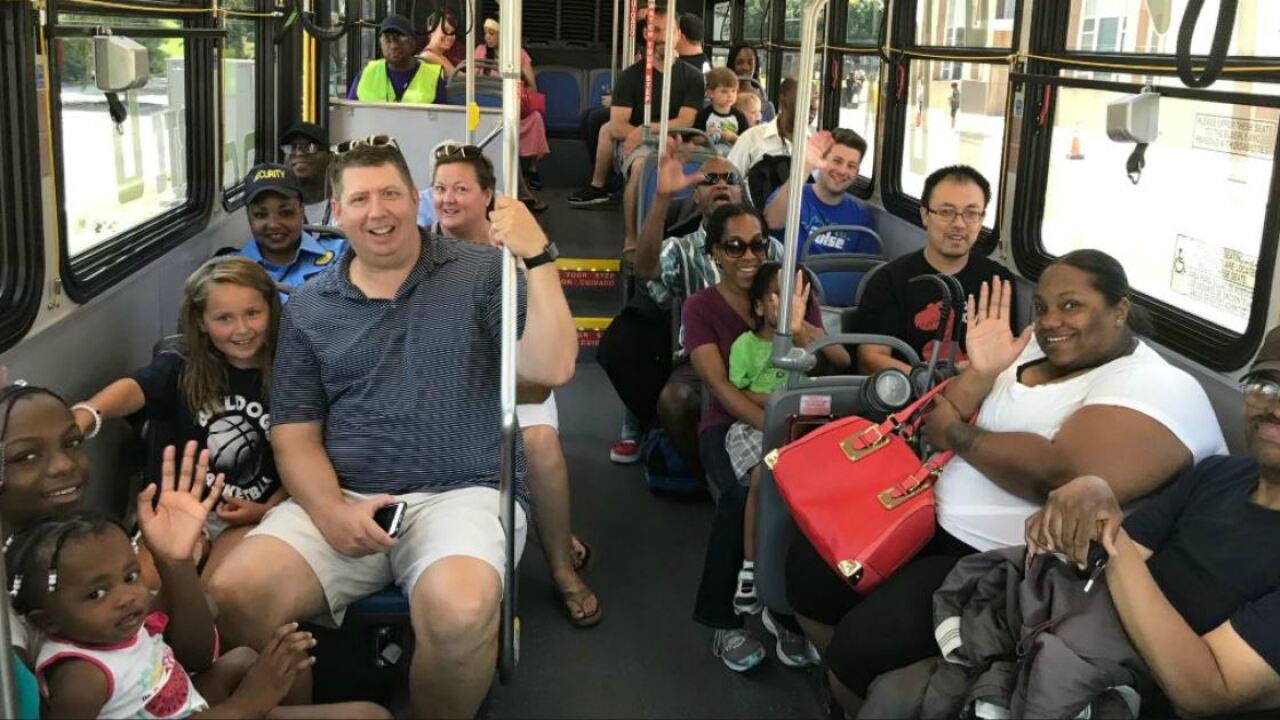 RICHMOND, Va. — Buses will operate a Sunday schedule on Wednesday, July 4, with the exception of extra buses being added by GRTC to help with traffic after fireworks events.

At the conclusion of several fireworks displays along or near the Pulse route, GRTC will add additional Pulse buses into service to accommodate the expected peak in rider demand. That means folks checking out Rocket’s Red Glare in Rocketts Landing can take a Pulse bus to and from the event.

It’s worth noting that big firework events like Dogwood Dell usually have a shuttle. There doesn’t seem to be a shuttle for Rocketts Red Glare, which will put more use on the Pulse. The Pulse will run extra buses until demand dies down. The bus can hold about 55 people (including people standing) but that number changes based on if there are mobility devices on board, or kids in laps. Riders will need to be patient during the exodus from the event.

The Pulse has a stop on E. Main Street that is about a block away from where Independence Day festivities will be taking place. The east and west bound stations are across the street from each other. Stone Brewing is also a little over a block away from this stop. Take that one and walk right over to the Capital Trail and riverfront area.

The next Pulse stop on the east bound route is Orleans Street, that puts riders out near the Boathouse, Conch Republic and Urban Farmhouse.

Rocketts Red Glare fireworks will start around 9 p.m. Wednesday. No pets, or outside food and coolers will be allowed. There are restaurants and breweries (Triple Crossing and Stone Brewing are open noon to 5 p.m.) nearby, and there will also be food trucks and breweries.

The Diamond will also host a spectacular fireworks show after the game; first pitch is at 6:35 p.m. Wednesday. Fireworks could be anywhere between 9 and 10 p.m., and the stadium is just under a mile away from the Scott’s Addition Pulse stations in the 3100 block of Broad Street.

There are plenty of breweries and cideries in the Scott’s Addition neighborhood, in addition to restaurants, that are all located near the Scott’s Addition Pulse stop. Most spots have a good view of the fireworks. Every craft beverage establishment is open on Independence Day, but only Buskey Cider, Blue Bee Cider, Ardent Ale, Isley Brewing and Three Notch’d will be open at fireworks time.

Hardywood Brewing and Castleburg Brewing are about a mile walk over to the Allison St. Westbound Station, and both have Independence Day events planned.

Additionally, Lyft is offering 25% off up to $6 on rides to and from Rocketts Landing​ between July 2 and 5, according to the Boathouse. Enter promo code ROCKETTS25.

Reminder! People riding the bus do have to pay for their fares. Fares must be bought prior to boarding the Pulse, but not any other routes.

GRTC said that all 26 Pulse stations should have functional credit card machines in operation.  Just remember to grab your ticket from the tray after you buy it! There is also a mobile app to pay in advance; it’s called GRTC Mobile Pass.