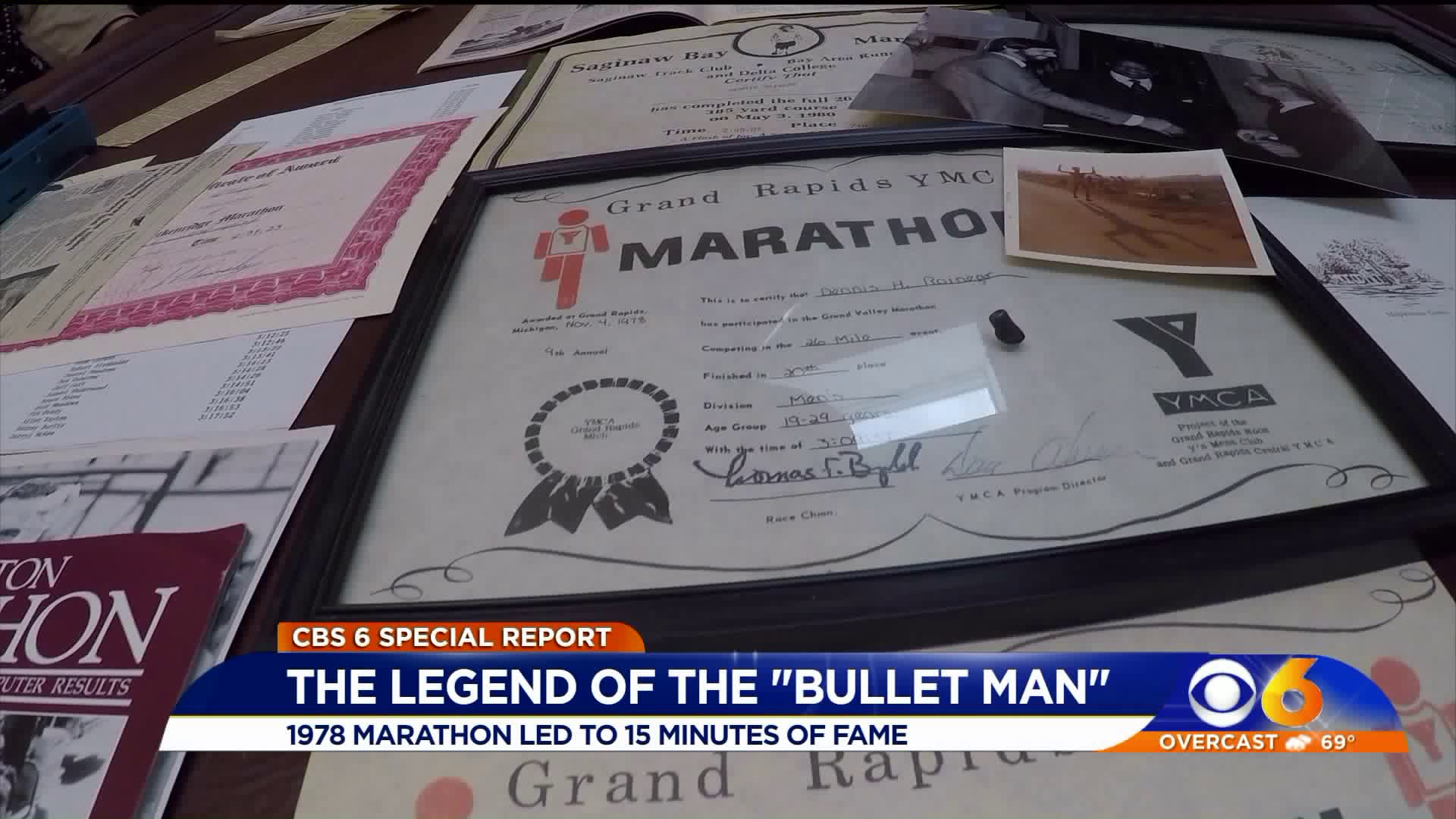 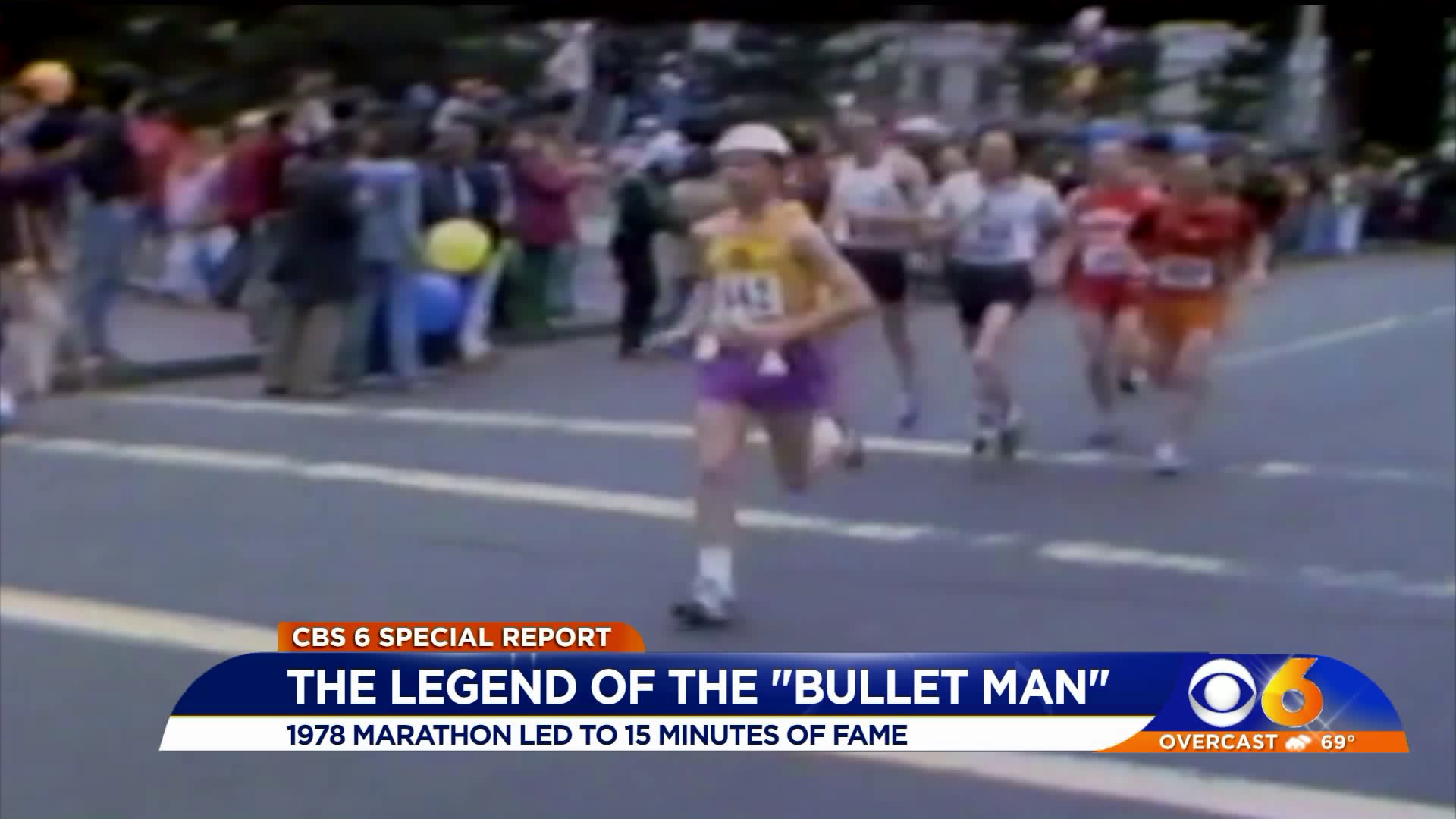 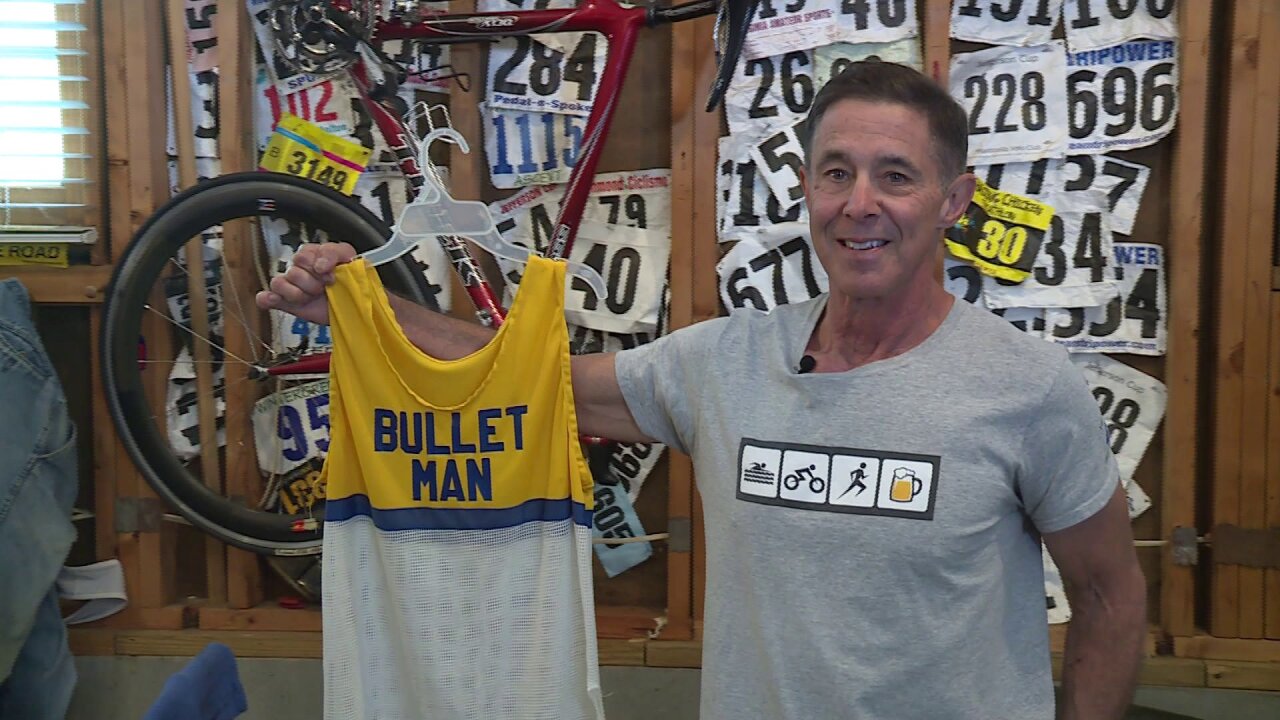 HENRICO COUNTY, Va. -- The year was 1978. Jimmy Carter was President of the United States.  The Bee Gees, Grease, and Bruce Springsteen ruled the radio. Superman flew high at the box office.

But this story, is about a different man of steel - Bullet Man.

Forty years ago, Dennis Rainear became somewhat of a celebrity.

"Friends and relatives would say 'I saw you in our local paper,'" the Henrico man recalled.

His story so noteworthy, so unbelievable, he was asked to appear and share it on the Game Show "To Tell the Truth."

"I was on that show, and nobody would believe the story," he said.

His incredible story began on an unusually warm November day, not in the West End, but in Western Michigan.

Then 28 years old, Dennis had traveled about two hours from his home to Grand Rapids, to participate in the Grand Valley Marathon.

"It was my fourth marathon and I was attempting to qualify for [the] Boston [Marathon]," he said. "At the time, the qualifying time to be admitted was three hours, and I had already run three hours and 31 seconds, so I thought with training it was clearly possible to break the goal of three hours."

Despite the heat, things went well for Dennis, until he reached a rural stretch of the race course at about the 10-mile mark.

"I literally got knocked off my feet," he said describing a violent blow to the top of his head. "It felt like a rock or a brick had struck me."

Dennis immediately assumed it was kids who had thrown something at runners, but when he looked around, he saw no one.

He then thought maybe he’d been hit by a large branch, but there were no trees.

The only thing Dennis knew for sure, was that he was in pain.

"[I] put my hand up there and it was just like in the cartoons where you get a big goose egg, a lump coming out of somebody’s head, and I had this big lump, but i didn’t see much blood, and a ringing in my ears, but no other explanation," he said.

Dennis was hurting, but he was not going to quit the marathon.

"[It] didn’t even occur to me to stop, I just looked around and kept going," he said. "I was groggy, I was wobbly, I had a little trouble focusing my eyes, again, no explanation, I just thought dehydration, must be dehydration for this time of year."

His time was slipping. He lost about 10 or 15 seconds per mile.

"At one point I actually slowed down and stopped because I thought I was getting so wobbly maybe this would make it better, so I walked for a little bit, about 18 or 19 miles in that range, and that actually made it worse," he said.

He eventually picked up the pace, and forced himself to power through.

"Finally got to the finish line, struggled in, 3:09, pretty disappointed, and kind of upset," he said.

Dennis was immediately greeted by his wife. She could tell something was wrong.

"She came over and said, 'I thought you were going to break three hours today, what happened?' I said, 'I don’t know dear, I think somebody hit me with a brick, look at this on my head.'"

She checked it out, but couldn’t tell what had happened. So they grabbed a hot dog and walked over to the race doctor.

"The physician looked and he peeled back the scalp and the hair a little bit and he said, 'I see something, some kind of foreign object stuck down in there under the scalp, right in the bone,'" Dennis recalled. "He finally said, 'I don’t know, but I think maybe you’ve been shot.'"

Dennis said hearing those words made him nervous and sick.

An ambulance near the finish line was not available to take Dennis to the hospital because it was being reserved in case someone had a heart attack So Dennis and his wife got directions to a nearby hospital and drove there.

Nurses at the hospital could not believe what they saw.

"They made me ride in a wheelchair, even though I had already run a marathon," Dennis said. "The physician, with some difficulty, was able to finally pry the bullet out."

Dennis Rainear ran 16 miles with a bullet lodged in his skull and lived to tell the tale.

But who shot him? And why?

Shortly after a doctor removed a bullet from Dennis' skull, police took the 22 slug, got Dennis’ statement, and began an investigation.

The bullet was sent off for testing.

When those results came back, some questions were answered.

"The police report said it was fired from either a poorly maintained gun, an old gun, a sawed-off gun, or a gun equipped with silencer," he said. "That could answer a couple questions there, why i did not hear it."

While the identity of the gunman remains unknown, thanks to one of his buddies, a lot of people would soon know Dennis.

"One of my friends mentioned it to the newspaper, and they didn’t believe it," Dennis said. "They came over to my house a few days later and interviewed me, and next thing I know they called back and said 'we’re going to put this on the AP wire service so you may get some calls.' This was pre-Internet right, so I just shrugged. Well, he was right, within an hour, the phone started ringing and didn’t stop ringing for like three days."

If there was such a thing as going viral in 1978, Dennis did it.

"I  hadn’t taken much note of this incident initially, so I hadn’t called my brothers, hadn’t called my sister, didn’t say anything," Dennis said. "It was on the news and my sister-in-law heard my name on the radio having been shot in the head, she almost wrecked the car, she was scared to death, and I said okay I better fess up and tell the family what happened."

Newspapers and magazines from across the country featured his story. He appeared on network talk shows, and even game shows.

While he had fun telling the story about his unusual injury, he was still haunted by the fact it kept him from qualifying for the Boston Marathon.

But that, would soon change.

"Somewhere in that process the journalism folks contacted Will Cloney and Jjacque Ssimple – the fellows that ran the Boston Marathon at the time – and said what about this poor guy, he tried to qualify, 3:09, so close, wouldn’t it be nice if you let him in, and they did!" Dennis said. "So I did get an invitation to the 1979 Boston Marathon, which I was happy to go and meet a lot of people, it was pleasure to run Boston."

Not just as Dennis Rainer, but as The Bullet Man.

"After the articles came out, I forget where the moniker came from, someone said faster than a speeding bullet,  so I had a shirt made up that said "Bullet Man," he said. "I kind of put a target on my back, if you’ll pardon the pun, and people would see me at a race and then maybe it would force me to run a little better than i would have otherwise."

Police never caught the person who fired the shot. Dennis said his initial thought, and hope, was that it was just a freak accident.

"It’s also fall in Michigan which is hunting time, or just prior to hunting time, and I think i heard afterwards we’d ran by a quarry, maybe it’s still there, maybe it’s not, where hunters would go in sighting their guns, get the gun sights set," he said.

But he has considered a few other theories over the years.

"I do remember early in that race, first five or six miles, a car drove through the crowd of runners and a lot of runners, probably me included, thumped on the side of this guy’s car, saying 'hey get out of here, this isn’t safe,'" he recalled. "Afterwards I wondered when I heard it was a bullet,  if he just sat up on the hill and took some shots until somebody flinched."

Another possibility emerged when Dennis received a strange phone call a few weeks after the race.

A man asked him what he looked like, and when Dennis asked why, the man told him that he had also run the marathon and that he thought some bad people may have been out to get him.

Had it been a case of mistaken identity? Was the bullet meant for someone else?

To this day, Dennis said he did not believe that was very likely.

Dennis still has the bullet that made him a star, and scrap books filled with news clippings and pictures.

He eventually left Michigan, returning to his native Ohio, before moving to the Richmond area in 1994.

He is still running.

"I made the top three in Ironman I think three times, haven’t quite qualified for Kona yet – the world championship, we’ll see what happens," he said.

He’s also a top cyclist – five times he has been named best in the state for his age group, and twice he’s made the podium at the national championships.

He now enjoys retirement, and spending time with his daughters and grandkids. And from time to time, he opens his West End home to triathletes and marathon runners from across the globe, giving them a place to stay when they come to Virginia to race.

Forty years later, The Bullet Man still gets a kick out of telling the tale of his hair raising close call, and the fame that followed.

"When people say they don’t believe the story, I say, well, go Google it, it’s out there," he said. "I think this is going to be on my tombstone, don’t you?"

Dennis is a member of the Richmond Triathlon Club, a group he said she was proud to belong because of the support and friendship they offer people of all skill levels, and because of the numerous races and rides they do for charity.